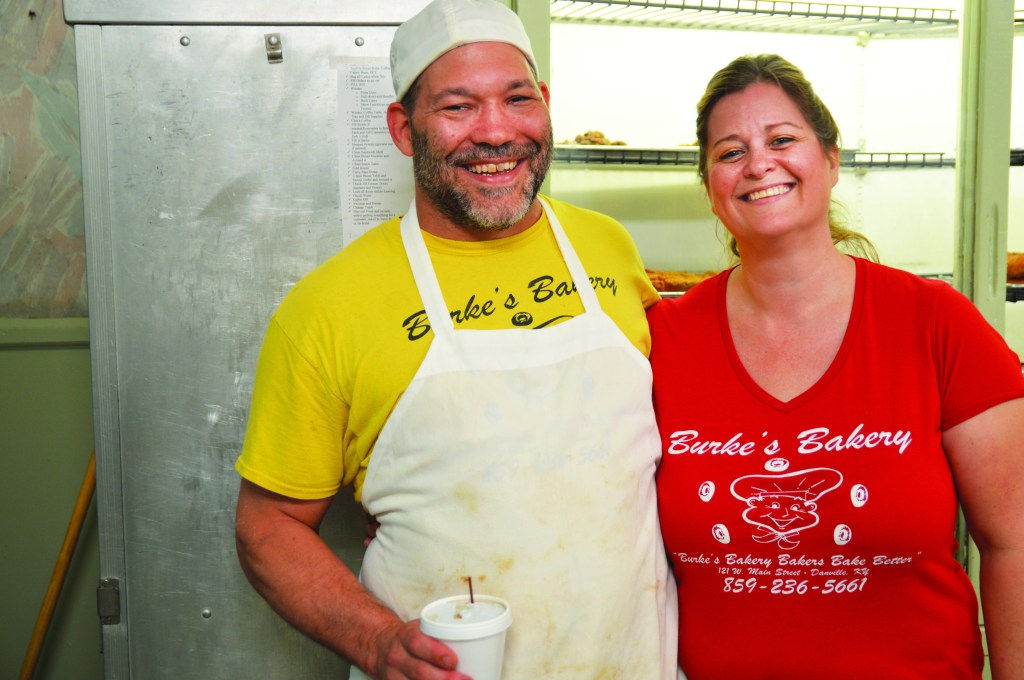 (Bobbie Curd photo) Joedy Burke, left, and Shawna Lofton work together to run Burke’s Bakery on Main Street. Joedy is the fifth generation to run Burke’s, started by his grandfather, Sam, and owned by his dad, Joe. Joedy and Shawna are not only a team at work, but have been dating for six years now.

“Morning” means something entirely different to Joedy Burke and Shawna Lofton than it does for most people. For Shawna, it means 3:30 a.m. For Joedy, around 4 a.m. 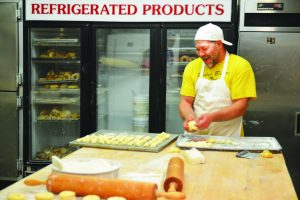 (Bobbie Curd photo) Joedy Burke says, “We are one big family,” as he cuts up constantly with coworkers, even at 4.30 a.m.

Joedy is the fifth generation to run Burke’s Bakery. The business was started in Junction City by his great-great-grandfather, Samuel W. Burke, in 1922, when they only made bread loaves. Joedy came on the team in 1994; however, the manager and his girlfriend, Shawna, beats him: She’s been here since 1992, first working for his granddad, Samuel Burke III. Joedy’s dad, Joe, bought the bakery in ‘99. An uncle owned it for a while, around the early ‘40s.

“Living and working together? Well ….” Joedy says, smiling at Shawna. “I have to tell her sometimes, ‘stop talking about work.’” But he gets it. When he leaves “the office,” he’s gone. When Shawna leaves, she’s still trouble-shooting for sales clerks: Can we make this cake? We have an order for 700 donuts next week … 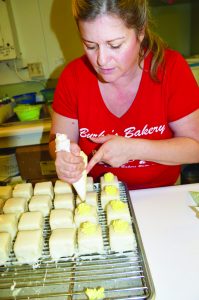 (Bobbie Curd photo) Shawna Lofton, who helps Joedy manage the bakery, creates roses for pinafores, a technique she learned from Sam, Joedy’s granddad. “He taught me how to create the roses on top of the cake,” she says, increasing the speed of her design skills.

“And that’s not even the big order,” Joedy says. The bakery also supplies the donuts for Run for the Bluegrass in Lexington, which Shawna says is around 1,000 of a varied selection. When they get orders this big, they start at midnight and work straight through to have them ready for delivery around 5 in the morning.

“It takes a while. You’ve got your Persian rolls, donut holes, twists …” Joedy says, listing off all the different goods. It’s a scratch bakery, he says. “We have a big stockroom with a lot of raw ingredients. I’ve got straight flour, not flour mixed with dehydrated eggs. Nothing is pre-mixed.”

Stores that use premixed dough do pretty well, Joedy says, but Burke’s is proud to be a scratch operation — even though every time a new place opens, it takes a little nibble out of their sales. 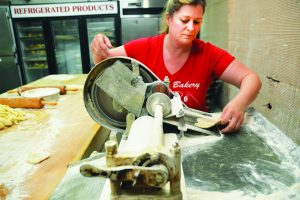 (Bobbie Curd photo) Shawna Lofton gives a demonstration of how the mini-pie crusts are made. “I’m kind of all over the place,” she says, about her average day at work.

About 5:55 a.m., the first customer walks up to the screen door of the baking area, beside the front entrance on Main Street. Joedy tells him to walk on through to the front and pick out what he needs.

The sign says they open at 7, but most know they start selling around 6. “I’m here. I’ve got it made. I’ve got a cash register and a sales girl. Why shouldn’t I sell it?”

However, that’s not the case around the holidays; they have to open at 7, he says, in order to have everything ready. There are usually lines waiting down the sidewalk, demanding their gingerbread men or butterflake rolls. Or chocolate donuts — they average selling about 250 on normal Saturdays, but everything increases during the holidays.

Joedy’s dad, Joe, comes in usually around 1 in the morning and does paperwork for a few hours. “Then he calls to wake me and Joedy up to come in,” Shawna says, and she likes that he does that.

Shawna manages out front and in the decorating room, and pretty much oversees most everything else. She takes inventory first thing in the morning, goes through the orders and relays needs back to Joedy, who mostly sticks to the baking area. He gets the donuts and other types of dough rolled out, put in the proofer (sort of like a large steaming machine) cut and ready to bake or fry, while overseeing everything else going on in the bake room. 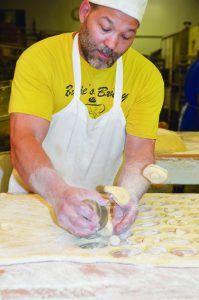 (Bobbie Curd photo) Joedy Burke cuts donuts lightening fast, as they flip up into the air and he catches them into a stack on his left thumb.

Most everything that goes out is made and on the road by 6.

“There’s different departments here, really. Pie and cookie department; cake and donut area; decorating area; out front; and the baking area,” Shawna says. Steamy, sweet smells come up from the bake room, which is referred to as “downstairs,” even though it’s only a two-step dip. The front rooms are referred to as “upstairs.” 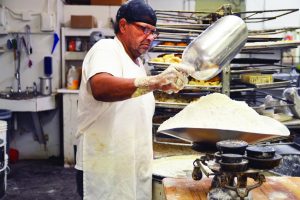 (Bobbie Curd photo) Joey Griffin measures flour to be added into the industrial-size mixer. Joey has worked for Burke’s since 1974.

Joey Griffin is working with a huge vat of dough. He agrees: The bake room is like the party room, full of laughter and loud music.  Joedy’s granddad didn’t play music, Joey says — he’s worked here since ‘74.

Joedy begins cutting donut holes and pulls out some of the older instruments that were used in days gone by; Joey remembers Sam, Joedy’s granddad, using those.

Joedy goes through a large circle of dough with a round instrument, cutting regular donuts. Flour puffs up into the air; doughy balls are flung to the side while the cut circles bounce up, landing in a stack on his finger. He does this with lightening quickness; turn your head and you’ll miss it. 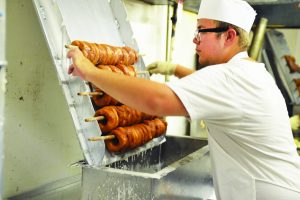 (Bobbie Curd photo)
Larkin Hinkle, 16, works to glaze donuts early Friday morning. After school starts back up, he will still come in to work the early-morning shift, before going to class. “Yeah, it’s pretty cool. And it puts money in my pocket.”

Back in the fry room, guys are laughing and telling stories. Tons of donuts are pulled out of the deep fryers and stacked onto screens where they cool. Some are iced or topped, others are filled with custard. Many are dunked into glaze, pulled out with a long stick and hung to drip-dry. Guys are bobbing and weaving around each other in perfect sync.

Over in the cake decorating room upstairs, Shawna holds a square chocolate cake, spinning it around in her hand while she uses a rubber spatula to apply German chocolate icing.

“You learn how to do stuff fast here,” she says. The bake room guys mostly stay downstairs, and although not all the upstairs girls decorate cakes, they all do help with waiting on customers. 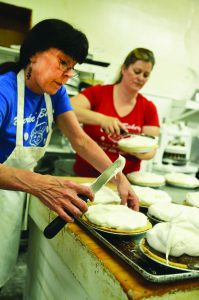 (Bobbie Curd photo) Tammy Polson, left, and Shawna Lofton get meringue on top of pies during the early-morning shift Friday at Burke’s Bakery. 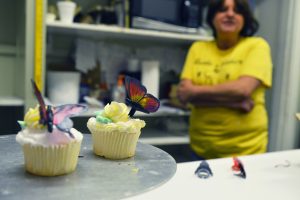 (Bobbie Curd photo( Sabriah Gainy stands in the background after finishing some cupcake decor of the day at Burke’s Bakery.

Shawna takes another walk through the front room, the cases now filled with cupcakes, rolls, cookies, buns and cakes for the day.

“One thing about food is you have to be here; you can’t take off,” Shawna says. “If we went on vacation, we’d have to close. It’s just how it is.”

She and Joedy began dating six years ago, but haven’t been able to take a vacation. “If Joedy’s not here, there won’t be any donuts…”

Joedy says his grandfather made him write everything down about how he ran the business. “He told me he wasn’t going to be here forever. He wanted to be, but wasn’t.”

Joedy says overall, the business may not be as busy as it once was, but they still do a lot for a small shop.

“I say we’re a very large small business,” he says. “I used to think I wanted to own two or three, but now I think I was insane. One is enough.”