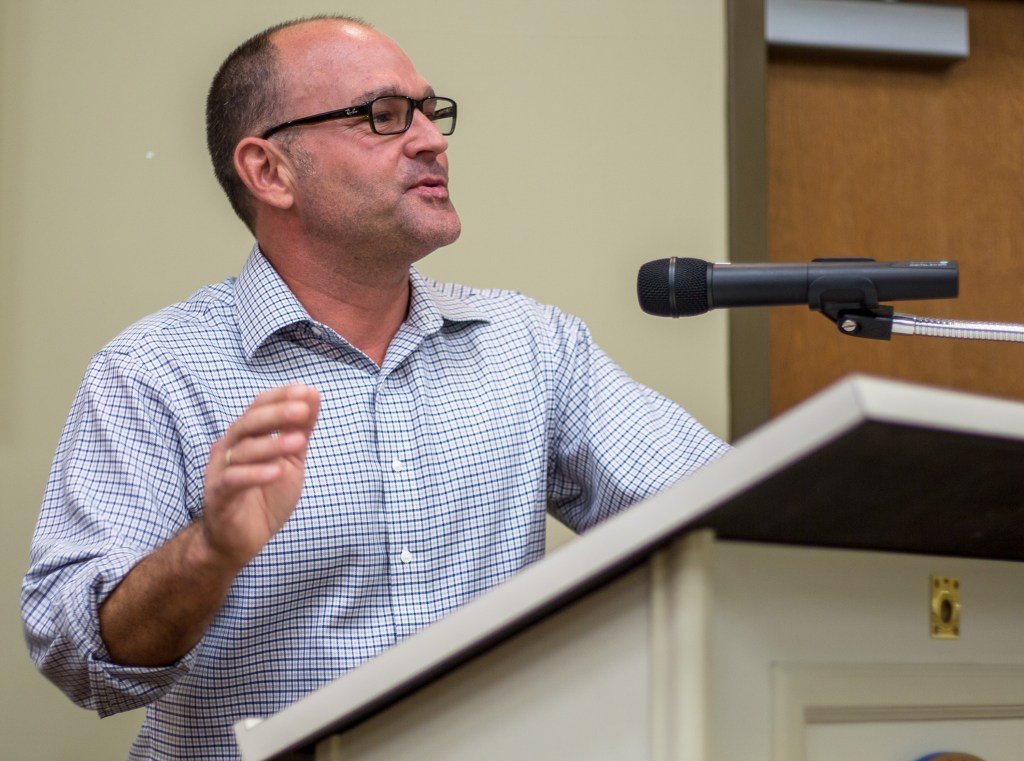 Ben Kleppinger/ben.kleppinger@amnews.com Andrew Wilkinson, president of Seeing Hearts Transition Home Inc., tells the Board of Adjustments Thursday he is fine with rescheduling a hearing for a conditional-use permit so more people can attend.

A hearing on whether to allow a transitional living facility to open in west Danville was postponed Thursday morning so more people could attend to voice their opinions.

The Danville-Boyle County Board of Adjustments was scheduled to hold a hearing for the organization’s conditional-use permit Thursday morning. About 30 people attended, many with the intention of speaking in support of or against the proposal. But Planning and Zoning Director Steve Hunter told the board he had received a lot of calls from people who couldn’t skip work to be at city hall at 10 a.m.

“You guys could decide to reschedule this to be more accommodating to the public (or) you guys could move forward with the hearing,” Hunter said. “… The two boards I staff (Board of Adjustments and P&Z Commission) meet in the morning and I hear that some, but I’ve probably heard that more on this case than any other case in the last year — a lot of folks said, ‘I want to be there’ to voice support or opposition. I heard it on both sides. ‘But 10 o’clock just doesn’t work for me with my job.”

Board attorney Henry Smith said the board wasn’t obligated to reschedule. But “the law provides your due process rights, chance for notice and an opportunity to be heard. And we might best uphold that opportunity to be heard for these people who have been calling in but couldn’t be here this morning if we were to have some kind of continuation of the meeting … at some point in the future.”

Board Chair Virgie Johnson said she had three people ask her to reschedule the hearing within the span of 10 minutes on Wednesday. She said one of the people who talked to her told her, “we’re a two-worker family and I just can’t afford to take off.”

“I feel bad about leaving those people out, because I think they need their voice just like all the people here need to have their voice,” she said.

The board decided it had the option to hear from anyone who attended Thursday morning and wouldn’t be able to come back Monday evening, but no one in the audience said they couldn’t come back.

Before voting to delay the hearing, the board heard from Andrew Wilkinson, president of Seeing Hearts. Wilkinson said he was OK with delaying so more people could have input.

“At Seeing Hearts, we believe in openness, we believe in communication and we believe in discussing things through with reason and logic and getting all the facts out on the table,” Wilkinson said. “I look forward to the opportunity to do that. So in the spirit of grace and cooperation, as president of Seeing Hearts, I will agree and cooperate with the decision of the board today to delay the hearing until others can be in attendance and their voices can be heard as well.”

The motion to delay was passed unanimously. Without any other business to discuss, the board then quickly adjourned.

According to The Seeing Hearts Transition Home application submitted to the board, the existing building will be used as a “6- to 12-month residence for men returning to society after having completed an incarceration sentence at either Boyle County Detention Center or Northpoint Training Center.”

Seeing Hearts plans to provide room and board (rent will be charged once employment is found); job placement and transportation assistance; weekly support classes; health insurance procurement; ministry outreach to spouses, children and families; and community outreach, according to the application.

Wilkinson said earlier this week the facility will not be a clinical in-house treatment center, nor be used in lieu of finishing a jail sentence.

It will be a home for only men who have completed their sentences, who may still be on parole and who have “illustrated accountability for their crimes … and exhibited a sincere desire to change and have taken advantage of their resources” while in jail.

The Danville-Boyle County Planning and Zoning Board of Adjustments will meet at 6 p.m. Monday at Danville City Hall for a public hearing on a conditional-use permit for Seeing Hearts Transition Home Inc., a residential facility designed to help former inmates who have recently completed their sentences, which would be located on Sycamore Street in Danville.

One new child care facility opening in Danville; another…