Meeting because we can: Human relations group offers annual family event to break down barriers 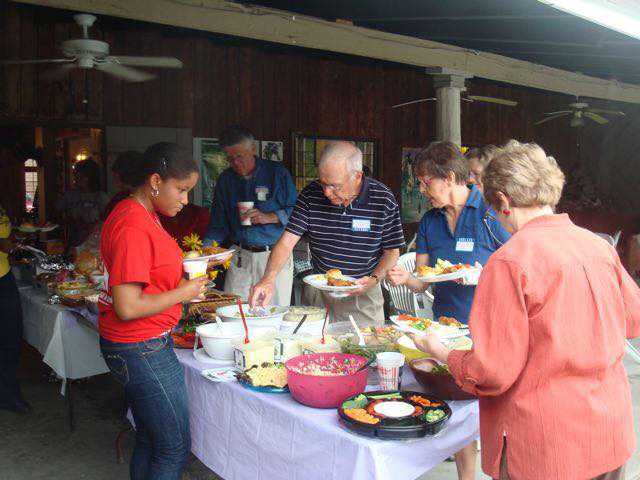 Photo submitted Families and friends take in the massive spread during a past End of Summer Celebration through CCHR.

An annual offering for families from all different walks of life to join together in a celebration continues this year on Sunday, Sept. 2, at Pioneer Playhouse.

The End of Summer Family Celebration, organized by Citizens Concerned for Human Relations, will be a continuance of the year-long celebration of Martin Luther King Jr. activities, said J.H. Atkins, chair of the organization.

The event will offer two group activities, including a program about MLK’s spoken words, presented by local actor Michael Ross.

“It will give us a chance to discuss those words during dinner,” Atkins said. “We always try to give attendees something to talk about.”

A drum circle will be led by Lydia Ellis and will focus on MLK and civil rights.

“CCHR originally got started in a Sunday school class,” Atkins said, back in ‘92. He said the group eventually began to share food over set discussions.

“We’d talk and eat, eat and talk,” Atkins said. “There’s something about people getting together around food and having important discussions about issues — it makes it less threatening around food.”

The meetings started having set focus topics or themes. “‘Meeting just because we can’ was our theme at first. At one time, people said we shouldn’t be together and talk about racial issues. We talk about human relations — a bit broader topic than race relations.”

“We invite all of the surrounding counties. I’ve had friends come from Lexington, Versailles, Campbellsville … Other folks come due to what we’re doing, in case they want to bring the idea back to their community to start.”

The group originally sponsored a heritage festival for 15 years in Danville, which happened the first weekend in March. “It was free; we had all kinds of racial groups and ethnic displays, for people to get out, meet and greet and talk to each other.”

Atkins says the event, which is a potluck with the meat, drinks and eating utensils provided, offers a family-fun environment.

“If you’re going to improve human relations, we’ve got to provide opportunities for people across socio-economic levels. People on both sides of the track are not coming together, can’t understand each other,” Atkins said. “We’re trying to get each other to understand each other before something crazy happens. No one knows anyone to turn to who they can trust, if they don’t look or sound like them. This event is hopefully breaking down those barriers.”

CCHR’s meetings are open to the public and held at 3 p.m. the third Sunday of each month at the Boyle County Public Library.

Other upcoming events through CCHR

• “The Meeting,” Sept. 20 in Gravely Hall Performing Arts Center at Danville High School. M.L. King and Malcolm X sit down for a discussion on civil rights. Time/ticket price to be announced.

• “Where do we go from here: Community or chaos?” community book read will be held in September and October. Books will be distributed Sept. 24-28 at Boyle County Public Library, with dates and times to be announced; discussion dates will be Oct. 14-21 in various locations/dates/times, to be announced.

• The Human Side of Immigration Law and Policy, 7 p.m. Oct. 23 in the community room at Inter-County Energy.

The End of Summer Family Celebration will be 5:30-7:30 p.m. Sunday, Sept. 2 at Pioneer Playhouse, rain or shine. The meat, drinks and eating utensils are provided, but families are asked to bring either a salad, vegetable or dessert to share. Those who would like to participate must RSVP with what sides they will be providing by calling (859) 236-5818 or emailing jh.atkins@centre.edu.

Swinging into a new school year