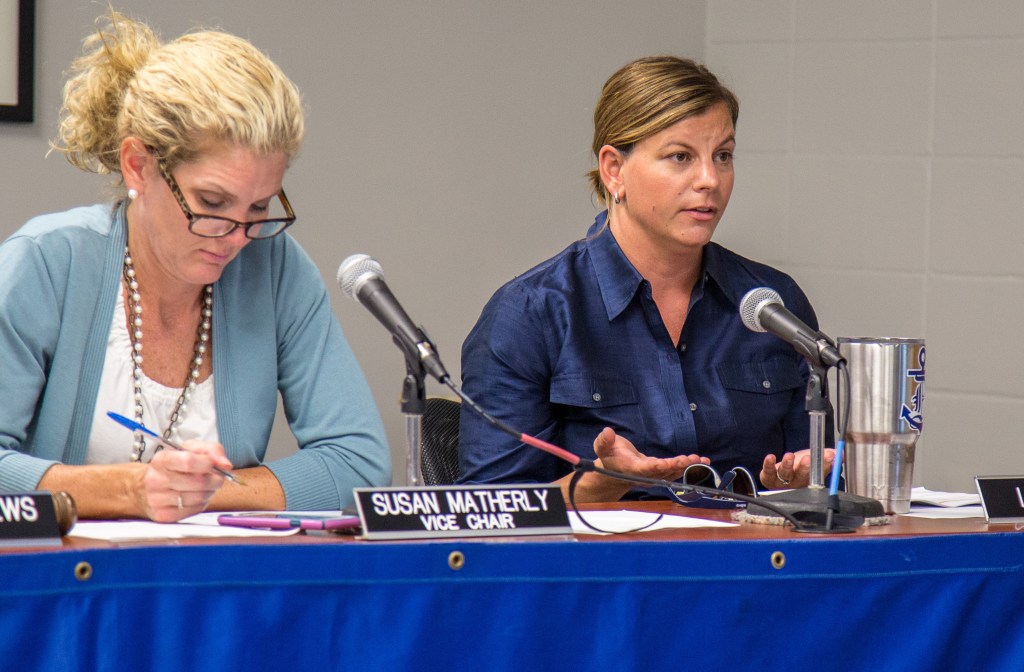 Ben Kleppinger/ben.kleppinger@amnews.com Danville Board of Education member Lori Finke, right, explains how she sees both sides of the debate over whether to increase property taxes during Tuesday night's public hearing.

The Danville Board of Education voted 4-0 Tuesday to increase its property tax rate by one-tenth of a cent on every $100 of property value. The new rate means someone with a $100,000 home in the school district will pay $1 more this year than they did last year.

The board chose what Director of Finance Paul Dean called the “compensating rate plus exonerations” — a rate designed to bring in a similar amount of revenue compared to the previous year, plus five-tenths of a cent in “exonerations” allowed by the Kentucky Department of Education.

In doing so, the board avoided bigger increases of 2 or 4 percent in revenue that were on the table — but it also set up the district to potentially lose hundreds of thousands of dollars from its reserves this year.

Dean told board members the district lost in the vicinity of $240,000 last fiscal year, dropping from almost $4.15 million in unassigned reserves to around $3.9 million. During this fiscal year, there are more than $225,000 in new costs that could further impact the district’s bottom line, he said. 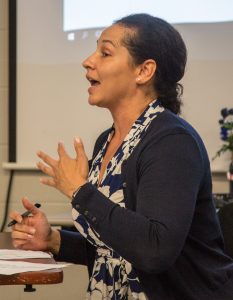 “Tax increases are not popular — I know that,” Dean said. “But they are responsible.”

Only one person signed up to speak during the public hearing on the tax rate. LaKeysha Singleton said the school district’s property taxes are already among the highest in the state for independent school districts, and many of those with higher rates are in communities on the edges of metropolitan areas, where there are more job opportunities.

Once it was time for the board to act, board member Steve Becker made the motion to take the compensating rate plus exonerations. He cited the district’s current carryover of nearly $4 million as a reason.

“I have a hard time asking our taxpayers to come up with additional funds when we can carry over that amount of money,” he said. “… We are one of the highest-taxed communities. They say we’re not, but we are. … I just think we need to stay where we are with the exoneration.”

Board member Troy McCowan seconded Becker’s motion. Board members Lori Finke and Susan Matherly said they were concerned by the district’s shrinking reserves, but had heard from many people who said they couldn’t take an increase.

The board members and Dean noted stagnant state and federal support for the district means local taxpayers are taking on more and more of the financial burden for the school district, whether they like it or not.

“We have a tax problem because we have an unsustainable way to raise money and that’s through property taxes,” Becker said. “… Our legislators need to be told that we have to have a different way (to raise funds). Every time they cut, we pay. Our legislators are proud of the fact that they cut our taxes, but they don’t — they just pass it to us. There is a problem that we can’t sustain this. Our investment in our kids is decreasing every year and that’s wrong. It’s just wrong.

Tammy Shelton, the district’s new superintendent, spoke before the board voted. She said she just moved into a house in the district, so any tax increases affect her like anyone else. But on its current course, the district could be facing as much as $500,000 in losses within 12 months and $1 million within 24 months.

That means discussions about available funds and what the district wants to do vs. what it can afford must become regular parts of board meetings, Shelton said.

“I do think that if you go that route, that we will need to have the conversation about what is the priority and not necessarily doing everything we want to do,” she said. “I think Danville would have to start looking at priorities pretty strongly moving forward.”

The board’s vote was 4-0; Finke said she would have supported a 2-percent revenue increase, but decided to “vote with the majority on this one.”

Board Chair Paige Matthews was not present for the hearing. 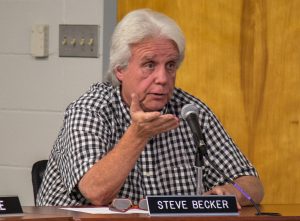 Ben Kleppinger/ben.kleppinger@amnews.com
Danville Board of Education member Steve Becker speaks during Tuesday night’s property tax hearing. Becker made the motion to take the compensating rate plus “exonerations,” meaning no significant change in property taxes for most homeowners.

In 2017, property owners in the Danville Independent School District paid the school district 94.5 cents for every $100 of assessed value on their property, meaning someone with a $100,000 home paid $945. In 2018, the property tax rate is 94.6 cents, meaning the same homeowner will pay $946. The tangible property tax, which applies mostly to equipment, inventory and furniture owned by businesses, remained the same at 95.5 cents per $100 of value.