A group of recovering addicts — and law enforcement officials, who had put many of them behind bars — met face to face and talked about their experiences in dealing with the drug epidemic in Boyle County during a “Bridging the Gap” meeting on Friday.

“This is hopefully going to be a series of discussions regarding the stigma attached to people with substance-use disorders and law enforcement. We hope to begin working towards a middle ground with both groups of people, and feel like this event is the first step in the right direction,” said Roger Fox, a recovering drug user and program director for Shepherd’s House, a non-residential substance abuse treatment facility for former inmates in Danville. 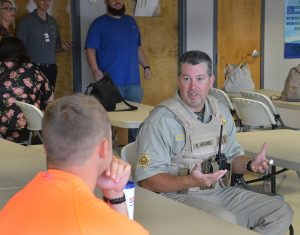 When welcoming the crowd to the forum, Fox said if this event had taken place five years ago, he would have stayed far away. People chuckled when he said he could have never been in the same room with the county and commonwealth’s attorneys, officers of the police department and sheriff’s office, and couldn’t have looked in the eyes of anyone from parole and probation. He said his dad had been a drug user and alcoholic, and he taught Fox to never talk to the police. He said before recovery, he was scared of first responders and anyone in law enforcement.

However, because of law enforcement’s intervention and a lot of determination, Fox was able to to turn his life around for the better, he said.

Fox wanted to quit using drugs, but couldn’t. A conversation he had with probation and parole officers as they were driving him to jail was the beginning of his transformation. He said he finally realized, “There are people who care.” 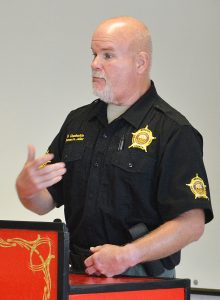 Fox told clients from the Shepherd’s House who attended the session he was glad to see them comfortable, smiling and looking healthy. He even encouraged them to thank officers for arresting them which started them on the path to recovery.

Before introducing County Attorney Lynn Dean to the group, he told her he wasn’t sure how she was going to be toward him at the meeting because she put him in jail more than 10 times.

At the podium, Dean said it was Fox who showed her people are capable of change and he helped to change her perceptions of those who are struggling with addictions.

She said she’s known to be tough on offenders and as a friend to law enforcement because she knows what they go through every day, especially when confronting drug offenders. She admitted she was at first skeptical of how Shepherd’s House treatment could really help inmates break the addiction cycle.

However she is now a believer in the program.

Dean said law enforcement “is tough on you all, it has to be that way.” She said the inmates have to be held accountable for their actions.

Then she said told the group from Shepherd’s House, “I’m proud of many of you. You look so different. Everybody looks pretty good today,” compared to how some of them looked while facing drug charges in court, she said.

Teddy Melton, an officer with the Boone County Sheriff’s Office, said he has first-hand knowledge of how drugs and alcohol addictions affect individuals and families because he grew up within those circumstances.

He never got involved in drugs or alcohol himself, but his older brother was a drug addict and his dad was an alcoholic. The combination also caused a lot of domestic violence in his home when Melton was a boy.

He said he always thought that was just how life was for everyone. He didn’t really think about it until he got older.

Eventually, Melton graduated from the police academy and became a law enforcement officer. And after a while of going on calls to domestic violence situations and arresting drug and alcohol offenders, he said it brought back a lot of memories of his childhood. He decided he wanted to help these people if he could.

Melton said on emergency calls he sees how people are struggling. “Something has really affected their life to make them take a syringe, stick it in a vein in their arm and shoot it up, or put meth in their body. Meth is deadly. It’s unbelievable the chemicals people put inside their body just to kid rid of pain. Just to get rid of hurt.”

Melton said his job is more than just arresting somebody on drugs and dropping them off at jail. “I always talk to them, see why they’re truly in the shape they’re in. They will open up and tell you stuff you won’t believe. Like what happened to them as a kid; what people have done to them to really harm them. It’s crazy … It’s sad what people go through and they try to put this chemical in their body to kill that pain. But it don’t work.”

Melton also blames pharmaceutical companies for the drug crisis. “It’s ridiculous. And those people are living the best lives ever.”

He added, “But we’re all the ones (users and law enforcement) that’s paying for it, and struggling to deal with it.

“First responders, we’re in the war zone of it. We get people when they are rock bottom. They’ve done everything. There’s nothing left for them to do.”

So he warned officers to try and not get tired and bored giving out Narcan and “dealing with the same people” by continuously arresting them on drug charges.

“We’re here to help people … A lot of people look down on law enforcement these days. I think law enforcement is very important in these people’s lives. Let them know that people care about them,” Melton said.

He recalled what his grandfather used to say: “It’s nice to be important. But it’s also important to be nice.” 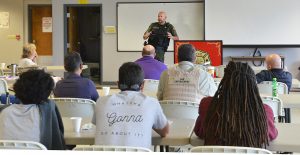