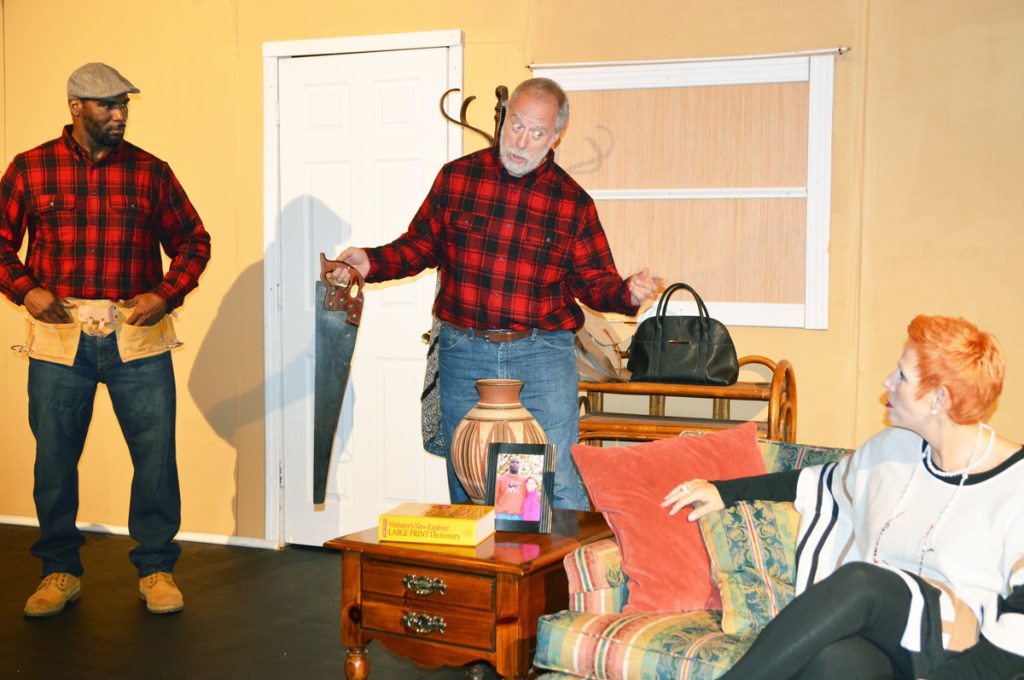 A new comedy is hitting the stage this weekend at West T. Hill Community Theatre, and director Steve Sleeper says he’s ready for the laughter. “A Red Plaid Shirt” focuses on the hilarity of life-after-career, highlighting the relationships of two couples.

“I decided to direct this play because it is a rarity for a script to cause me to laugh out loud continuously while I read it, and that is what this script did for me …” Sleeper says, about directing the four-person production. 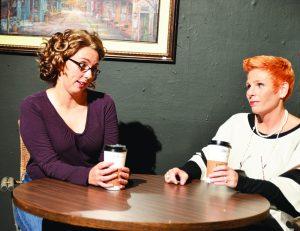 Julie Taylor, left, and Mary Carol Porter have a hilarious, indepth talk about their husbands.

The most recently retired, Marty, is struggling with finding meaningful direction since his retirement from teaching English, while his wife, Deb, is attempting to understand his plight.

“But Deb is not crazy about the pursuits he proposes to bring meaning to his retired life,” Sleeper says. “They finally settle on woodworking as the least dangerous of the meaningful options.”

Marty pulls his best friend, Fred, along and the two embark on an adventure of “bizarre woodworking.”

“Add to the story Fred’s persistent hypochondria and the amusing sarcasm of Deb and Gladys, and you have an uproarious mix of side-splitting humor,” Sleeper says.

The cast  is comprised of four characters, so each cast member has had an enormous amount of lines to learn, Sleeper points out. “Add to that the required comedic timing and character development, and it entails some rigorous practice and preparation.”

On a recent rehearsal night, the four veterans of the West T. Hill stage were fully into their characters, bouncing seamlessly off one another. Mark Porter plays Marty, and his wife is played by Mary Carol Porter — his wife in real life. Sleeper says this has led to natural chemistry in the show, with how well they work together.

The other two WTH vets are Julie Taylor, who plays Gladys, and Mike Crocetti as Fred.

“They really round out the cast and bring delightful life to their roles,” Sleeper says.

As far as how audiences feel as they walk away from this play, Sleeper says he not only hopes they are laughing, but feeling a new sentiment about retired life.

“I hope they find a light-hearted courage and confidence that enables them to look forward to, or find joy in the potentially daunting experience of retired life,” Sleeper says. Regardless of whether one is retired, on the cusp of retirement, or sees retirement in the far distant future, he says there are many moments in which every adult can relate to and find humor.

But humor isn’t the only substantial offering in this production, he says.

“It is not just the humor, though, it also brings touching insights to marriage, friendships, and the seasons of life.”

Although the play focuses on retirees, Sleeper says it should tickle the funny bone of any age level. “All ages should enjoy this…” he says, as it’s easily-relatable to people of all walks of life.

Fred and Marty (Mike Crocetti, left, and Mark Porter) don matching red plaid shirts as they embark on a bizarre woodworking project together.

Photos by Bobbie Curd/bcurd@amnews.com Director Steve Sleeper takes in a recent dress rehearsal for “A Red Plaid Shirt” at West T. Hill Community Theatre. He decided to direct the production because the script made him “laugh out loud, several times, just from reading it. That’s a rarity.”