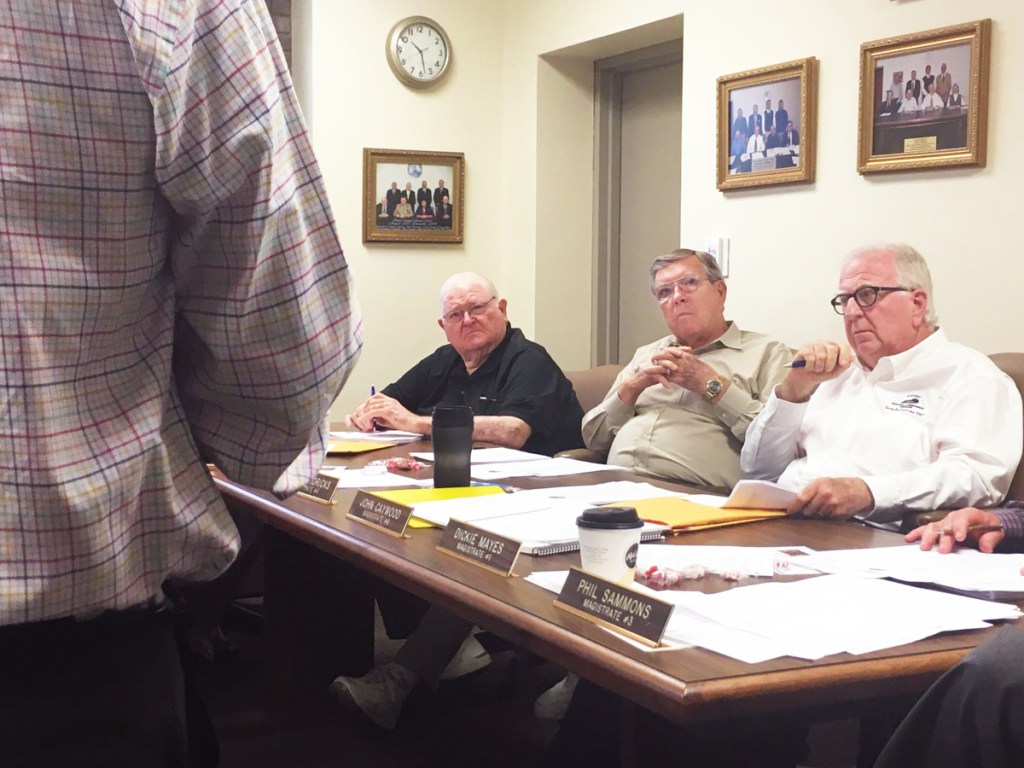 Bobbie Curd/bcurd@amnews.com Magistrate Jack Hendicks, center, listens to Ben Nelson, chair of the Economic Development Partnership Board, with Magistrates Donnie Coffman, left, and John Caywood, right, on why its workforce development cabinet is not "at the top of its list" of goals.

“As you can see, we’re dealing with an income shortfall,” Nelson said, pointing to the estimated cost of the full year of implementing its strategic  plan coming in at $578,306. However, EDP’s income came in at $393,310.

“Roughly a $200,000 shortfall. If you don’t get what that means, it means we can’t do everything,” Nelson told the court.

“We’re dealing with — just to be short — we’ve got stuff in year two that the plan called out for us to do, and we don’t have the resources to do. It’s a part of why this discussion with the board becomes so important, you’re going to have to pick and choose what’s most impactful. And that’s where I’m trying to take the board,” Nelson said.

“You’ve given a lot, and I want to say thank you. I’ve seen you do this for several years,” Magistrate John Caywood told Nelson. “This report was completed in June of 2017, probably started maybe almost a year before that.” He then asked Nelson if he felt like the taxpayers and the community as a whole “are getting our money’s worth, and has the EDP gotten what they’ve wanted to get out of this?”

Caywood was referring to the study done by R.K.G. Associates with the nine EDP partners in order to identify “implementation challenges and seek solutions to those challenges,” as Nelson’s summary stated. The company helped the partnership create an “implementation matrix,” to direct it in creating the extra committees focused on certain areas of development.

Nelson said the nine partners are using the matrix as a “key source document.” The reorganization, he said, has been “methodical, and has taken a while. That’s Chapter I, an organization plan is the building block.”

The EDP’s strategic plan consists of six key result areas, 32 objectives and 186 “actions/tactics” that are time-phased over 10 years. Nelson lined out the reorganized board, as well as who’s on the executive, finance, asset development, marketing and workforce development committees. Those committees, Nelson said, are “off and running” and meet once a month.

Nelson said the strategic plan is going “I would say, slow and steady — it’s a 10-year plan, but we’re getting ourselves in a position to move forward.”

Nelson said “we need to come together as a community — to get in the same boat, and row it the same way. This is about having the taxes that allow our local government to provide the local services you all desperately need to provide. If we don’t do this well, your only alternative is to raise taxes. As our consultant said to us, this is the only thing you all can invest in and get a return.”

Nelson said, “So, I wish we would stop being oppositional and adversarial, and say this is what we wanted to do. And we appreciate every voice, but we have to get it together to make it happen.”

Caywood pointed out that communication with the consultant led to the overall viewpoint that there is a “lack of community buy-in. That’s really important to me. Has there been any thought to how that’s going to happen?”

Nelson paused for a moment, then picked up a past issue of The Advocate-Messenger.

“I love The Advocate. See that headline? ‘Broken Heart-ed; Main Street Program reacts to funding cut from city,’ everybody remember this one? … How about this one: ‘EDP approves bare bones budget,’ headliner,” he said, as he held up the front pages and walked around the room.

“Everybody see that? … Here’s what I’m telling you — when we do this, what’s it say? OK? What does it say? I’ll tell you … The paled COO search, that was a headliner, too. The first candidate didn’t have thick enough skin because of how we’re doing this. We gott’a get behind this,” Nelson said, referring to the search for Hal Goode’s replacement, former COO of the EDP.

“Yes, but we have to talk about it to change it, too,” Caywood said.

Caywood then asked if the industrial foundation has “enough real estate, going forward?” and Nelson deferred to Alan Turbyfill, EDP treasurer and member of the executive committee.

Turbyfill said although there’s still real estate available in the Industrial Park, and “there’s some other industrial parcels around the city and county, but not very many. If you look at short term, yeah, there’s land available to sell. But looking long term, that next prospect very well might be looking for something we don’t have. It’s definitely a long-term concern.”

However, Turbyfill said going forward, “that will have to be addressed by the larger entity — the EDP, the city and the county, possibly not something that the industrial authority on its own can do.”

Caywood asked, “In our participation, I assume you’re speaking of it in the way of funding.”

Caywood then commented that he realized Jody Lassiter, EDP president and CEO, was traveling, but that “in the future, I’d like for Jody to be able to be here and participate and be able to hear any concerns of anybody around the table.”

Nelson pointed to the fact the court had given the EDP two dates to come and give updates, and that, “Jody has told you from that point forward he was out of town,” but said he was certain Caywood could easily get in to see Lassiter if he wanted time with him.

“My standing is that we’d come and meet with you as often and as frequently as you can stand to have us,” Nelson said.

“The (EDP) meetings are open, anyone can come to them,” Judge-Executive Harold McKinney said. “It’s not like they’re behind closed doors.”

Magistrate Jack Hendricks wanted to clear up what he had said was talk on the street about the workforce committee. “That when you come up with a shortfall of money, that was one of the areas that got dropped to the bottom of the list.”

Nelson said he would say it “sort of differently.”

“When we submitted our scenarios to you and other funding partners for considerations, we offered different scenarios” of implementations and what they’d cost, Nelson said. He said the fully implemented two-year plan had targeted $40,000 towards workforce development.”

“When the incomes didn’t come in, that is an item in the budget that wasn’t approved by the board and wasn’t funded. What we said is that as workforce (committee) begins to identify things that require funding, they’ll come back to the board and request it, and see what we can do,” Nelson said. “But restraints are tight. But to say it fell to the bottom of the list, I don’t believe that’s true.”

Hendricks asked, “If it’s not being used and there’s no money for it, what would you call it?” He said he thinks workforce development should be at the top of the list.

“If we don’t have workforce development, we’re not going to be able to do anything if and when we ever get a large corporation, which we hope is going to happen …”

Nelson said the community is not investing in workforce development like it should be.

“I welcome more income, more resources. But given what the board has to deal with, the budget they passed did not have anything earmarked for it.” Nelson encouraged Hendricks to work with “your three board members” who represent the county for the EDP, referring to David Williams, David Maynard and David Young.

“This is an organization that runs on volunteers, primarily,” McKinney said. “I think we’re making good progress.”