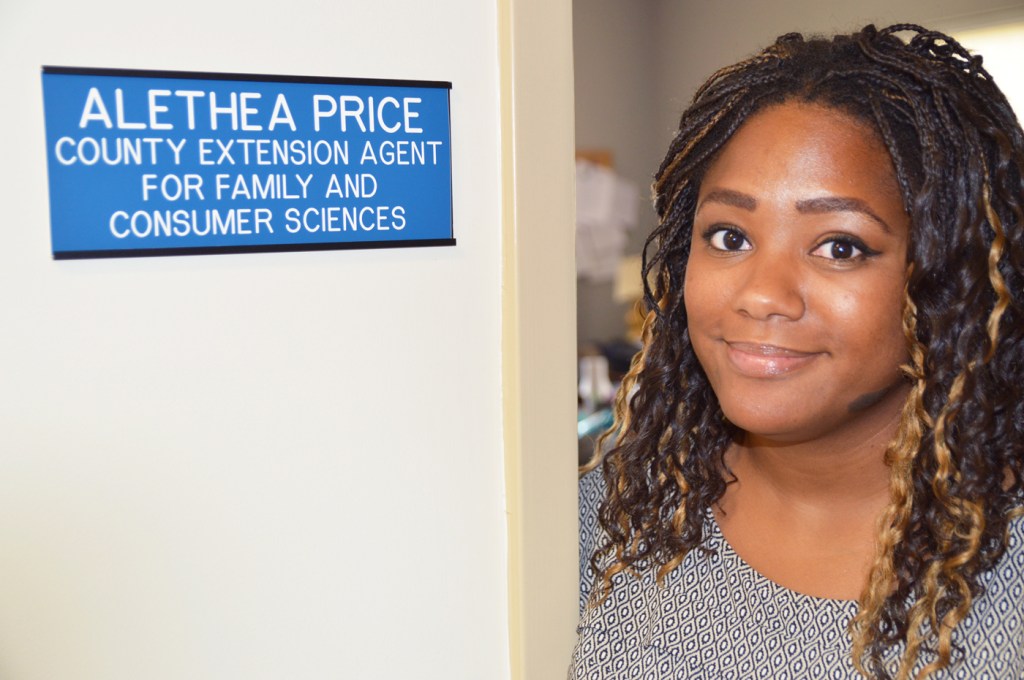 Bobbie Curd/bobbie.curd@amnews.com Alethea Price stands at the entrance to her office inside the Boyle County Extension Service's building.

Being an extension agent doesn’t always mean tobacco or 4-H. Most don’t realize the myriad of free classes and programs offered through Boyle County Cooperative Extension, but Alethea Price does. She’s worked to develop and deliver them for the past six years. 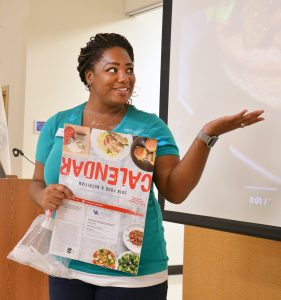 Robin Hart/robin.hart@amnews.com
Alethea explains the simplicity of a recipe during a recent program.

As a family and consumer sciences agent, she deals with everything from how to get mold out of your basement and how to clean your wood floors, to parenting skills and creating healthy meals for your family, to professional development.

For instance, she recentl y got a call from someone canning rabbit. “Yes, you can can rabbit …”

Probably the most popular program is Lunch and Learn, offered monthly at the extension office, which has a large kitchen allowing hands-on training. Usually, she says they learn how to make a recipe then try it. Most recently it was “game day Sloppy Joes.”

“I focused on the food safety aspect with this one, how to handle having all this food sitting out during tailgating, or even at home during a football game. Those good’ole mayonnaise-based salads we all love — but if you have them sitting out for the whole duration of the game … “

The program is free, like all of what she offers. She’s given classes at housing authority locations, at the library and the senior center.

“I will talk to a group, anywhere — as long as there’s meeting space, I can hold something.”

Life skills are part of her responsibility, and that’s a huge area. She does a lot of budgeting and money-management, but says those classes are not always well attended.

“I know the general public would benefit, but many don’t come. They think ‘money management’ is for the wealthy, and it’s not.”

If a certain group reaches out to her, she can tailor the class to fit their needs. For the SelfRefind or Shepherd’s House gatherings, she’s held them on resumés, cover letters and appropriate workplace behavior. She’s also done these programs for Northpoint Training Center and the jail.

“They’re great groups. I think they’re just happy someone has taken the time to show some interest in helping them.”

After one presentation, Alethea got a special, handwritten note on the back of an evaluation — which she must send out to all program participants to be returned to her, one of the ways U.K. evaluates its agents.

The note was from a participant at the Shepherd’s House from a budgeting class. Alethea reads, “‘Thanks for the class, it gave me many tools to use toward financial security … I learned how to save $75 a week, reduced my debt by $1,000 and saved $2,500 in the last 12 weeks.’ I keep that note to look at, and just for them taking the time to write that, I think ‘you are wonderful, you beautiful soul.’ That makes me so happy they got something out of it.”

She also works with the Munchkin & Me program at the Community Arts Center, through LEAP — the Literacy, Eating and Activity Program. She reads a book to children, usually with an angle like nutrition or hygiene, then an activity is offered, and CAC has a teacher work with them on a craft. 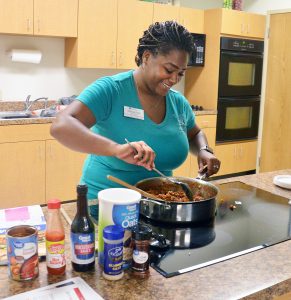 One presentation she’s done was geared specifically for a women’s group who wanted to know more about the Kentucky Proud project, and how to become a producer.

“Today, I’m working out a program for a Leader Lesson,” Alethea says. She says the homemakers’ associations fall under the umbrella of the extension service, and their whole connection is education. “FCS agents offer a Leader Lesson each month, and the leaders of groups take those lessons back to their clubs. But anyone can come to the classes.”

This month, it’s on wardrobe trends of the current year. “Bright colors are where it’s at this year, so you know …”

“All ages come to that. I’ve had them from 16, to a set of grandparents who found themselves with custody of their grandchildren. I was so happy they came; they said they hadn’t raised kids in 30 years, and they were such a great couple,” she says. “I’m teaching, but it’s more of an open forum. It almost turns into something of a support group.” She said parents usually find solace in discovering they’re not alone in their situations. But many times, she says parents aren’t always open to these types of classes, even if they do need help.

“Some people think it’ll be a situation where someone will be telling them how to raise their kids; it’s not like that at all,” Alethea says. “It’s a sharing of different types of parenting styles and techniques and what’s worked for others. I just share alternative ways.”

She leads many Adult How-To programs, with a different topic offered at 6 p.m. every fourth Monday at the library. This month it will be composting, but Alethea will have a master gardener fill in for her as she’ll be in San Antonio for the annual family and consumer sciences’ national extension program — and she considers herself lucky to attend. Having the ability to share ideas about programs and education with her national counterparts is incredibly helpful, and in the past, she was able to meet a superstar in her arena: Alice Henneman, who just retired from Nebraska’s extension program. She writes most of the publications Alethea uses to teach from, and she uses U.K.’s materials, as well.

“And I will tell you, when you have the opportunity to look at other states’ extension programs, you really see how Kentucky has one of the best extension services in the U.S. It’s very well-run, we have great resources to use and great leadership.”

As for the programs that don’t seem to be so well-attended, Alethea says for the most part — she gets it. “When it comes time to get off work, you want to get your groceries and go home. People don’t necessarily want to go to a class to learn how to make their own all-purpose cleaner out of vinegar. And if they’ve got kids, I know they’re going to practices, things like that. But the classes are offered in the daytime, at night and on the weekends, too,” she says. “And again, I’d love to have more groups contact me to present to them.”

Alethea says extension and all that it offers is probably “the best kept secret, but it doesn’t need to be a secret. People should take more advantage of what we offer — and it’s offered for free. These programs are for you.”

For more information on programs offered by Alethea Price through Boyle County Cooperative Extension, or to talk to her about presenting to your group, email a.price@uky.edu or call (859) 236-4484.

Robin Hart/rhart@amnews.com Alethea Price stands at the head of the class during a recent Lunch and Learn program at Boyle County Extension Office.

Bobbie Curd/bcurd@amnews.com Alethea pulls out a vintage canning jar, circa 1985, someone brought to the extension office.