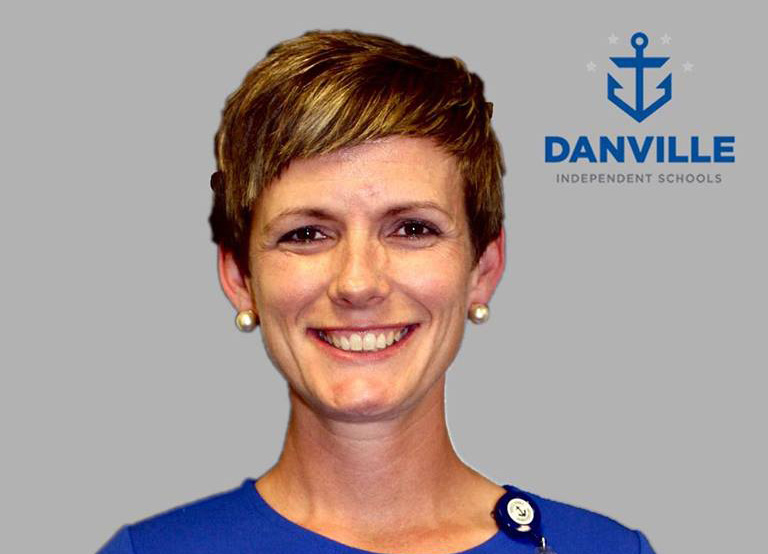 The fourth time was the charm for the Danville Schools in its search for a new second-in-command for the district.

“I’m excited to try to have the impact that we’ve had at Bate across the entire district,” Satterly said Monday evening, after Superintendent Tammy Shelton announced the move.

Satterly is in her 15th year as an educator, all of them spent in the Danville Independent School District. She graduated from Danville High School in 1999 and returned to the district as a music teacher for Hogsett Elementary School in 2003. She taught for eight years before taking a position as a guidance counselor for middle- and high-school students. In 2016, she was named principal at Bate Middle School.

Satterly will remain principal at Bate until the school council selects a new principal, Shelton said.

“I’m not going to pull her from Bate until we have somebody in place,” she said. “She’s going to have the title and she might start doing some work at the central office, but it will not conflict with her responsibilities at Bate. We will make sure that Bate is taken care of above all.”

Shelton said she has been handling the job duties of the assistant superintendent position since she took the reins in July and plans to continue handling those duties “until we have strong leadership at Bate.”

Shelton said Satterly has made a lot of good work as Bate’s principal and she would like to see her implement some of the same initiatives districtwide.

The school district sought candidates for its “director of schools” position three times without finding a good fit. In August, the Board of Education voted to upgrade the position with the “assistant superintendent” title and a salary increase of $4,169.

The former director of schools position was “assumed” to be second-in-command in the district, but the assistant superintendent position is officially designated as such, Shelton explained previously.

Satterly said the work she’s done at Bate has helped increase students’ proficiency by helping teachers differentiate their teaching for each individual student’s needs. Teachers use daily, weekly and monthly assessments to help figure out which areas each student might not be excelling in, and then they try different strategies to help the student in those areas, she explained.

“We’ve made some pretty strong instructional changes in Bate in the past two and a half years,” she said.

Satterly said leaving Bate for the district’s central office was a difficult decision.

“The hardest thing in the decision was the kids — getting to see kids every day. And the staff at Bate is wonderful,” she said, adding that she is looking forward to her new position. “I’m excited to try to have the impact that we’ve had at Bate across the entire district.”

Satterly said she is proud to be a Danville graduate and now the district’s assistant superintendent — “I bleed Admiral blue.”

That’s because the school district helped her develop into a successful adult, and she believes it can do the same for many kids today.

“I was the poor kid, the broken home kid, that just kind of did what needed to be done and got through,” she said. “… I love this district for the fact that that’s our population, that we can help kids that otherwise would feel like they couldn’t do what I’ve done. (I hope I can) help them realize that they can.”