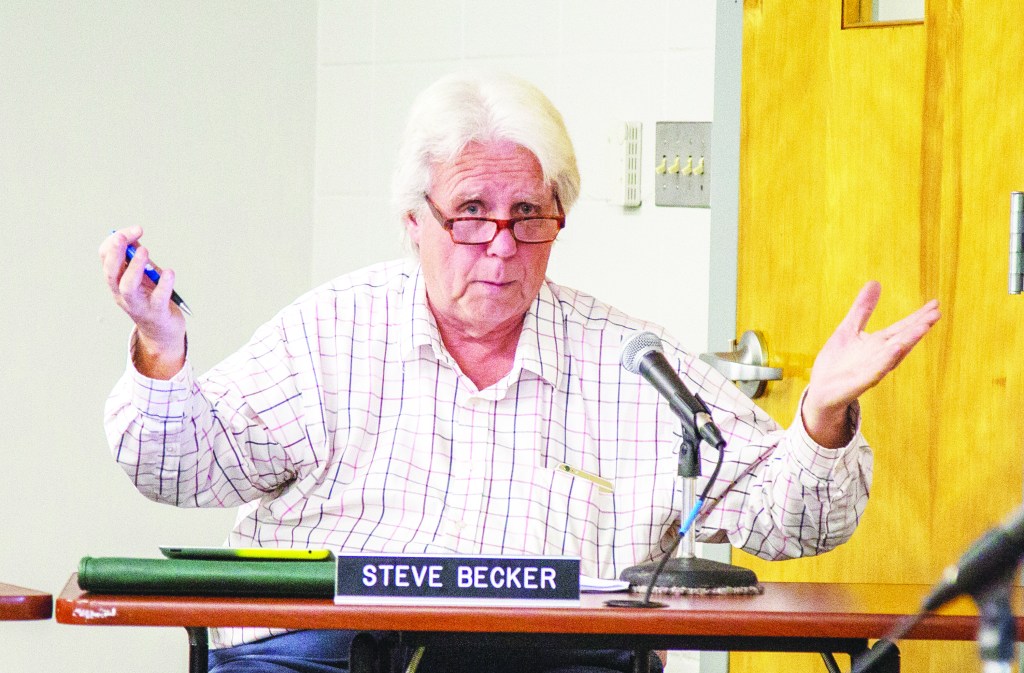 Ben Kleppinger/ben.kleppinger@amnews.com Steve Becker, a member of the Danville Board of Education, talks during the board's September meeting this week. Becker says the public needs to be more aware that land purchases by tax-exempt entities affect the school district's property tax revenues.

The City of Danville’s plan to purchase two commercial properties on Main Street for a new fire station will have a negative impact on revenue for the Danville Independent School District.

That’s something people might not realize, and it’s a good example of a problem for independent school districts that often flies under the radar, Danville Board of Education member Steve Becker said this week.

Danville voted earlier this month to purchase Dexter Real Estate-Insurance and Off Broadway Terrace apartments adjacent to city hall for $1,150,200.

Because Danville is a governmental agency, it does not pay property taxes on land it owns. So those properties come off the tax rolls for the school district, as well as other taxing districts such as the library, Becker said.

“In comparative dollars, it is small — but it’s still about $8,800” in lost revenue for the school district next year, he said. “… I think it’s a concern we need to be aware of.”

Becker and district Finance Officer Paul Dean said losses like this don’t look like much individually, but any time a non-profit such as Centre College, the hospital or a church buys property, it also gets taken off the tax rolls.

“It adds up,” Becker said. “… I don’t think the public generally aware that any time a non-profit buys (land), that takes property taxes off the rolls for the school districts.”

School taxes assessed on the properties last year were 94.5 cents for every $100 of value. That means last year, the property owners paid Danville Schools $8,741.25.

Eric Kennedy with the Kentucky School Boards Association said the state’s 53 independent school districts all face the same problem. Independent districts are landlocked — they cannot annex additional properties like cities can. That means “even one property” being transferred to a tax-exempt entity “can be such a disproportionate kind of financial hit to one of our smaller, independent districts.”

“That is kind of a unique situation that really hits those independents,” he said.

Becker said KSBA does work with the state legislature on how to better protect school districts’ local funding. He would like to see a “creative solution” put in place, such as allowing tax-exempt entities to “pay down” the property taxes on a newly acquired property over time — “something that gives the school districts time to be able to deal with these losses.”