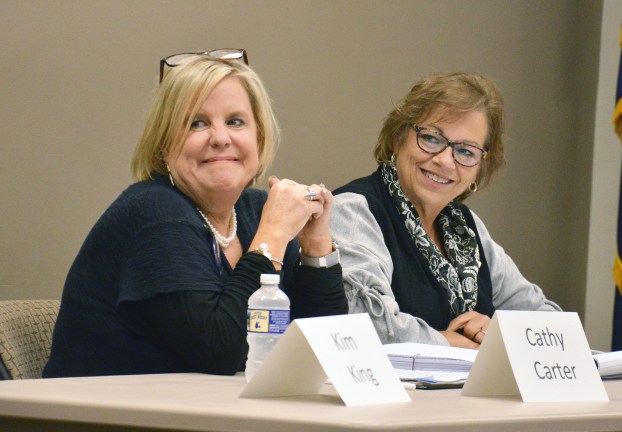 Photo by Robin Hart/robin.hart@amnews.com From left, state representative candiate for the 55th District, Cathy Carter (D) and write-in candidate for the 54th District Lydia Coffey, listen to moderator Barry Peel during Divisible Danville's forum which was held Wednesday night. Their Republican opponents, who are also the incumbents, Kim King and Daniel Elliott didn't answer the group's invitation to participate in the forum.

By BEN KLEPPINGER and ROBIN HART

With a little more than a month left before the general election, there hasn’t been a public candidate forum or debate featuring both eligible candidates for the 54th District Kentucky House of Representatives seat. And it doesn’t seem likely there will be one.

That’s partly due to one of the candidates — Lydia Coffey — not appearing on the ballot.

Coffey, a retired teacher living in Casey County, decided to throw her hat in the ring after the Democrat who had been planning to run against the incumbent Republican, Daniel Elliott, dropped out. But because the filing deadline for the primary election had passed, she has to run as a write-in candidate.

The Danville-Boyle County Chamber of Commerce is hosting a series of forums for nearly every local contested race, but not races for the school boards or any involving write-in candidates.

The progressive grassroots group Indivisible Danville held a candidate forum Wednesday night for the 54th District race (representing Boyle and Casey counties), as well as the 55th District race (representing Mercer, Washington and part of Jessamine counties). But while Coffey and the Democratic candidate in the 55th, Cathy Carter, attended, the incumbents Elliott and Kim King (R-Harrodsburg) did not.

The forum was moderated by Barry Peel, a veteran reporter, and its topics were “the future of public education and state pensions.”

During the forum, Coffey and Carter focused mainly on the importance of having quality public education for all children in their districts and what they said were the dangers of charter schools. They also spoke about concerns of losing good teachers because of the state’s pension funding issues. And they’re worried about the decrease in Kentucky students who are entering the teaching profession because of the lack of support public schools are receiving from the government.

“I don’t consider myself a politician … But I’m tired of people making rules that, you know,  they’ve never stood up in front of a classroom; they’ve never done lessons plans; they have no idea how difficult it is, spiritually, mentally and physically to do what we do,” Carter said. “I want to make sure that we have a voice” in Frankfort.

Ways to help shore up and fund the state’s pension plan were also discussed following questions from the audience.

Legalized gambling, “would not pay off in the long run,” Coffey said, because other surrounding states have already tapped into those dollars.

Carter said she would be open to researching what kind of money could be raised for teachers’ pensions if another tax could be placed on the bourbon industry and the sale of thoroughbred race horses.

The two candidates also strongly favor collective bargaining and support unions; they are displeased with tax cuts for wealthy corporations and are against the tax deductions that have recently been abolished that they say will affect middle- and working-class families.

In a written statement provided to The Advocate-Messenger, Elliott said he has “immense respect” for the forum’s moderator, Peel, but he did not attend because he has “serious concerns about participating in an event sponsored by a group that openly and avidly supports an extreme liberal agenda.”

An invitation to the forum distributed by Indivisible Danville stated that Coffey and Carter “both oppose the education cuts, the state funding of charter schools, the destruction of the inviolable contract and moving future teachers to a 401(k) system.” The invitation states that Elliott and King did not respond to a request they attend and that they “supported the education budget cuts and the pension bill passed by the General Assembly.”

“Our goal is an informed electorate,” Indivisible Danville member Julie Pease stated in an email the day before the candidate forum. “… it would be great to have the incumbents defend their records.”

Elliott wrote that Indivisible Danville has accused him on social media of voting to cut public education and state pensions, “when nothing could be further from the truth.”

“While the topics chosen (for the forum) are very important, a forum needs to address a wide range of topics, since a legislator faces numerous issues,” Elliott wrote. “It should not be relegated to two topics, state pensions and public education, in order to support the agendas and campaigns of the Democratic candidates while allowing them to avoid airing their views on other critical issues that a legislator will confront during his or her term, such as the Second Amendment.”

Asked in a follow-up interview if a forum or debate for his race would be possible, Elliott responded, “I think that honestly, it would depend on a lot of factors. I’m on seven committees, so I do stay very busy, so it would have to be done in consultation ahead of time, with a moderator and a location and obviously a group willing to sponsor it and so forth. We don’t have that now.”

Asked if it would be beneficial if such an appropriate forum could be worked out, Elliott responded, “That’s as far as I’m going to comment on that.”

King did not respond to a request for comment.

For the first time, there will not be a mock Civil War battle during Perryville Battlefield’s annual commemoration. However, the... read more