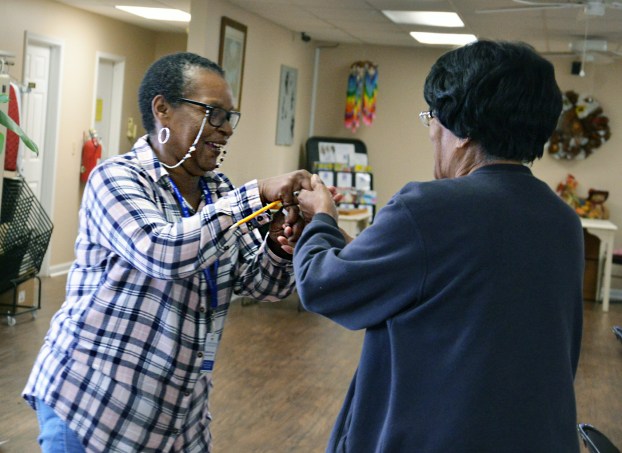 Robin Hart/robin.hart@amnews.com During a game of Charades, Delores Yocum acts out the word "dance" with Jean Johnson at A Gathering Place.

Delores Yocum’s job seems like it’s all fun and games.

One day she may be playing Charades; another she’s coloring. Fridays are always movie days, she says. And on really special days, she takes her friends on field trips.

Being the activities director at A Gathering Place Senior Activities Center, Delores stays busy interacting with everyone who stops by the center for a few hours on Mondays, Wednesdays and Fridays — a job she’s held for about five years.

The center doesn’t have planned activities on Tuesdays and Thursdays, but Delores goes in to work and “fills in wherever I’m needed.” Sometimes that means she’s driving a van or car to pick up seniors and take them to their doctor’s appointments or grocery shopping.

Delores doesn’t have an office behind closed doors. She works from her large desk, near the pool table, in a corner of the Gathering Place’s spacious community room. And she’s constantly laughing and talking with the seniors who are chatting nearby. 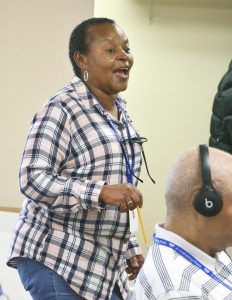 Robin Hart/robin.hart@amnews.com
Delores Yocum is the activities director at The Gathering Place.

Her desk is covered with art supplies, papers, books, pamphlets and sticky notes. And what doesn’t fit on the desk, she spreads over an adjoining table. She laughs and says, however, she knows exactly where everything is she needs for the seniors’ activities.

And the wall behind her desk is a showcase for some of the seniors’ colorful artwork she proudly displays for everyone to enjoy.

A typical day at the center starts at 8:30 a.m., when she makes coffee and checks on supplies she needs for the day’s activities. On bingo days, she goes shopping for prizes that will be given out. “It’s always useful items,” Delores says, like paper towels, soap and cleaning supplies. Sometimes, there are “sweets” too, she says.

Delores makes sure everyone is included in games that she plans. One day last week she handed out a slip of paper to each senior with a word written on it for their game of Charades. Delores laughed, and pointed to someone who stood up and acted out “bird,” then someone else stood up and acted out the word “happy.”

When a lady was stumped on how to act out “book” Delores whispered in her ear what could be done. An older gentleman was supposed to act out “skipping” but didn’t have enough balance on his feet, so Delores asked her daughter, who volunteers at the center, to take his place.

When she isn’t playing games, Delores makes sure other activities are planned for those who want to participate, like exercise classes, sing-a-longs, bingo and karaoke.

She’s also adamant about scheduling health classes. This month, someone is coming to talk to the seniors about chronic diseases and self management of their ailments.

And on Wednesday, Oct. 24, Delores has planned a fundraiser at The Gathering Place to raise money for research and awareness of breast cancer. “That’s my thing,” she says. She’s fought breast cancer every five years since 1999, and just finished her last round of radiation treatment less than two weeks ago,

“It really feels like my family here,” Delores says. When seniors can’t make it to the center, she sends them cards, and calls to say hi and check on them.

And even though she only missed one day of work during her chemo treatments in December, the staff at the center took up donations to help her through the holidays.

“Help is just a phone call away,” Delores says of the closeness of the seniors and staff.

To raise awareness and funding to fight breast cancer, The Gathering Place Senior Activities Center will be offering chili dinners from 4 to 6 p.m. on Wednesday, Oct. 24, for $6 which will include homemade chili, a sandwich and pink cupcakes.

Robin Hart/robin.hart@amnews.comDelores Yocum is the activities director for The Gathering Place, a senior citizens activity center.

Robin Hart/robin.hart@amnews.comServing meals to senior citizens at The Gathering Place is only a fraction of what Delores Yocum does during her days at the center.

Robin Hart/robin.hart@amnews.comSharon Hernandez laughs as Delores Yocum teases her about having blue teeth after eating a blue cupcake.

The Boyle County Board of Education has approved the initial forms with the state for a pair of capital improvement... read more