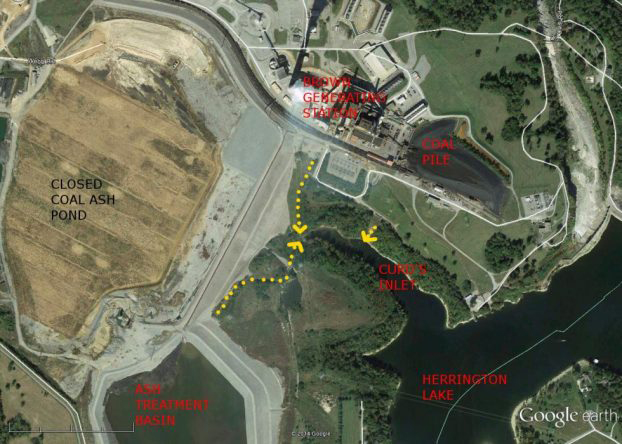 The legal force and local residents behind a move to hold a corporation responsible for pollutants in Herrington Lake received good news on Sept. 24.

Earthjustice’s case against Kentucky Utilities has been reinstated, and will be “headed back to district court, where we’ll finally be able to reach the merits of the case,” said attorney Ben Locke.

In 2017, Earthjustice, along with the Kentucky Waterways Alliance and Sierra Club, filed a suit against KU, demanding cleanup of pollution they argued comes from the E.W. Brown Power Plant. Coal ash waste containing selenium and other poisons has made its way into the lake through groundwater, they argued.

The Kentucky Division of Water’s testing results showed nine out of 10 fish near the plant with selenium levels 98 times the amount legally allowed.

The testing was done because four years ago, KU was being inspected following a state fine and had entered into an agreement to clean up the contamination. During the subsequent inspection, more evidence of pollution was found in the discoloration of lake water near the site.

Included in Earthjustice’s suit was an independent study, ultimately published in an international scientific journal, showing head and spine deformities in fish. A fishery biologist said the deformities are associated with selenium exposure.

KU dismissed the results as “political posturing” and said they were “inconsistent” with what other testing was found, and that it was already in agreement to follow a “corrective action plan” set up by the state.

In December, U.S. District Judge Danny Reeves ruled his court has no authority over the case. The suit’s complaints were based on two federal acts, the Federal Clean Water Act and the Resource Conservation and Recovery Act.

That ruling was appealed and Locke said, “What the appellate court said was that the residents of Herrington Lake have a right and a standing to file this lawsuit, and have a standing in the court to file against KU for the harm caused.” He said KU’s “so-called corrective action plan is no excuse for kicking the plaintiffs out of court.”

Locke said the group will have oral arguments in front of the 6th District Circuit Court judges. “We will have an opportunity to go back to court and go to discovery, gather facts from KU that will shed light on what’s going on at E.W. Brown Power Plant and in Herrington Lake. That means we’ll be highlighting the problems, such as the selenium and the fish deformities that have been observed.”

Locke said there was another part of the claim that was rejected: “They said that although we have a right to sue over the harms resulting from the pollution in the lake, we can’t sue under the Clean Water Act for the discharges themselves, which travel through groundwater.”

He said the court’s position is that the act doesn’t regulate pollution that travels a short way through groundwater before entering surface water.

“Although that position has been rejected by two other circuit courts elsewhere — the 9th and 4th Districts,” Locke said. “We think that decision is wrong. In effect, they’re saying the act regulates discharges only at the mouth of the pipe, coming from the plant. If you move that pipe back a few feet from the shoreline, so it’s discharging into the soil — just a few feet — the Clean Water Act no longer applies. It’s a point of serious concern for us, environmental activists and community activists.” He said that interpretation signifies to polluters that it’s OK, as long as they’re discharging pollution indirectly as opposed to directly into water.

“I think at face, we have a disagreement with what the actual text of the statue means. I’ll note that it was a three-judge panel, and two ruled that the Clean Water Act doesn’t apply, and one judge issued a scathing decision that articulated very precisely why it’s wrong. We agree with the dissent, and we think that’s the correct ruling on the law.”

There was a third ruling, Locke said, that “in short, ruled that the district court does not have discretion to pass up on this case and leave it to the state to work things out with KU. As much as KU might like to strike a deal with the state, the district court doesn’t have the discretion to let them do that. So it was a favorable ruling for us.”

Locke said the plaintiffs will make a decision on seeking a rehearing on the Clean Water Act question by Oct. 8. “If we file that petition, we have further proceeding in front of the 6th Circuit. If we don’t, then we’ll go on to the Eastern District for discovery.”

Earthjustice also filed suit against the Kentucky Energy and Environmental Cabinet on Aug. 23, claiming it has withheld more than 180 records, some known to be related to the studies KU said it undertook on the lake according to the corrective action plan.

Locke previously said “…our position is that there’s enough data and a remedy is called for, warranted on the basis of what’s already been collected. In our opinion, the state should be stepping up to clean it up. It’s their job, but they essentially left it in KU’s hands. They went on record saying they’ve got it under control … Now, we’ve asked for proof, and they’re refusing to disclose it. If the state wants to reassure the public it has the contamination under control, they need to disclose the documents to explain how.”

Earthjustice maintains the cabinet willfully violated the law when it withheld the documents it requested without explanation.

Danville school board candidates speak to public at forum

Danville has “five extraordinary candidates to choose from” for three seats on the city school district’s Board of Education, according... read more