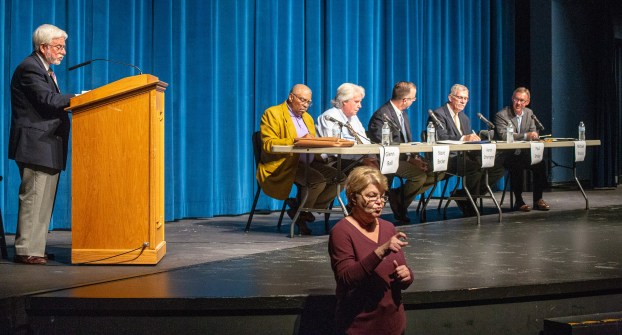 Danville school board candidates speak to public at forum

Danville has “five extraordinary candidates to choose from” for three seats on the city school district’s Board of Education, according to Barry Peel, a veteran broadcast journalist who moderated a forum for the candidates Monday night.

The forum, held in Gravely Hall at Danville High School, was sponsored by the Danville Schools Education Foundation and the Danville Education Association. It was not a debate; rather, all five candidates were given the opportunity to introduce themselves, briefly answer eight questions and give concluding remarks.

• Glenn Ball is a licensed commercial pilot and mechanic who worked in the flight industry in St. Louis and Orlando, earning multiple master’s degrees in the field. “What got me started in aviation was crop-dusting here in Danville, Kentucky,” he said.

• Steve Becker is a current member of the Board of Education who is seeking re-election. His background is “mainly in the food services industry;” he moved from Louisville to Danville when his wife was offered a job in the area. His three children attended the Danville Schools. “The reason I want to remain on the board is that we have lots more work to do and I am more than willing to do the work,” he said.

• Aaron Etherington is a former principal at Danville High School who is now the principal at East Jessamine High School in Jessamine County. When he was a department chair at DHS, he helped build AP curriculum for the high-school level that’s still being used today; and he was an administrator in the district when it was named a “District of Innovation.” He has a second-grade daughter in the Danville district. “I am here because no matter the mascot, no matter the boundaries, no matter the colors we wear, we believe in our kids.”

• Paul Smiley worked at Gallaudet University in Washington, D.C., a university for deaf people, before coming to Danville to work at the Kentucky School for the Deaf. He has lived in Danville for 39 years and his three sons grew up attending the Danville Schools. Smiley said he is a good fit for the school board because “I’m calm, proper, I’m suitable, qualified” and he has a “good spirit and grace.” Smiley promoted the acronym “FITS” in support of his campaign — F for the first name on the ballot; I for being interested in a strong vision for the district; T for having time as a retiree to focus on being a board member; and S for supporting Superintendent Tammy Shelton.

• Michael Strysick is chief communications officer for Centre College and a parent of two current Danville students. He said he wants to work as a team with the rest of the board “to make even more good things happen for more of our students.” The district should be setting goals for success and comparing to other, similar districts, rather than trying to compare itself to Boyle County, he said. “We all need to be rowing in the same direction and with lots of oars in the water,” he said. “This is what I mean by my campaign hashtag, #BetterTogether.”

Peel asked the candidates to list what they believe to be the district’s greatest asset, and then the greatest challenge.

Becker said the Danville community is the biggest asset: “We have a community that has always supported our system. It makes a big difference, it makes life easier,” he said. “… We can’t lose that support, so we need to be doing much more community-driven things” and getting students outside the school buildings, interacting with community members.

The biggest challenge is deciding how much emphasis to put on test scores, Becker said. There are those who “could care less about test scores,” those who want the district to do OK compared to state averages, and those who “all they know about the Danville Schools is our scores.” Taxpayers are asking the district to do better, he said. “I hear more and more a comparison of what they’re paying in dollars and what they feel like they’re getting in end results, and that’s not a great place to be.”

Ball said the best asset is “the students are involved in their school.” He has been substitute teaching in the district since February 2017 and has seen that “the majority of students are involved, as are teachers.” The biggest challenges are paying enough to retain excellent teachers and providing vocational skills training to students, he said.

Strysick said while there is “no single asset that really is the anchor of the Danville school system,” he wanted to focus on two: diversity and teachers. Diversity is “one of the things that attracted our family to the Danville Schools,” he said. On teachers as an asset, he said, “We have had just an embarrassment of riches in terms of the experiences that our two daughters have had and are continuing to have because of the connections that they made with their teachers and the rest of the staff. I’m totally grateful, particularly at a moment when we’re seeing declining support for teachers and for public education.”

As for challenges, Strysick said he couldn’t point to just one, but “we’ve come out of a difficult moment where our community has been very divided … we need to be able to begin rowing in the same direction.”

Ball and Strysick both said work needs to be done to develop a diverse faculty of teachers that more comparably reflects the diversity in the student body.

Smiley said the school district’s best asset is its teachers. “Danville has excellent, excellent teachers … My three sons have benefitted greatly by the teachers all the way through,” he said. “Our teachers are dedicated, they work hard and they get results.”

Smiley said there are three challenges facing the district — parent involvement: “children need to go home and know that every evening, education is a part of being home;” poverty: “it’s very, very important that we raise up and help the children that need the help the most;” and working with Frankfort to prevent a change that would require a graduation test before students could graduate.

Etherington listed the district’s diversity as its greatest asset. “I choose to send my daughter to the Danville Schools because I believe that this is as close to a microcosm of the world that she will ever experience here in central Kentucky,” he said. “There is not a better experience that she had going to Hogsett Elementary than working with students of different ethnicities, different socio-economic backgrounds and people across our country and the world.” Etherington also agreed with Becker that community support is a big asset: “We are blessed to be in Danville where our tax rate is high, where we have willing people in this community that are willing to open their pocketbooks and pay for a product that we have offered here.” Etherington listed two challenges — a “lack of respect that local, state and national politicians give to our teachers;” and a “very large achievement gap.” He said the Danville district is one where “not one high-school student performed distinguished in math and literacy who was labeled as African-American. That has to change.”

Peel asked the candidates how they would plan to “engage the community” and what the role of the Board of Education is in working with school-based councils.

Smiley said public relations professionals can do good work, but “the way to sell, to make people understand is (through) all the employees in the Danville Schools. They’re with everybody in the communities and they need to be positive … it’s the people that are going to make the opinion of our schools rise.”

Strysick also listed good communication as a “key way to better involve the community in the work of the schools. I think it was Winston Churchill who once said that you shouldn’t let a good crisis go to waste, and we have gone through a crisis moment in this district. And as we move forward, I’m just going to keep harping on this — we have not had a strategic plan for some time. We need to have a visionary strategic plan with actionable goals and accountability built into it.”

Strysick also differentiated between the board’s focus on finances and the individual school councils’ focus on school policies.

Ball said a strategic plan should be in place for the district and community leaders need to be involved in what goes on in the schools. Parents, students and people like managers of “major stores” in the community all need to be interested and engaged, he said. “When students graduate, they may be working for one of those (big businesses), so let’s have that party in that process, engaging with the students.” That could help Danville avoid “brain drain” — losing smart people who move away, he said.

Ball said of the board of education and school councils: “It should be and it is a check-and-balance system that has inclusion, not exclusion. Everyone should be involved in the education process.”

Becker said improving engagement with the community “first has to start with trust in the school board.” He said he has served on the school board for a total of 12 years, and “in those years of experience, I have never, until the last two years — almost three years — been approached by teachers, staff and community members who say, ‘I’ve never seen such a lack of trust in the leadership of the school district.’ That hurt. That hurt. It still hurts. We’ve got to face it folks: … these last few years have been pretty tough. There’s no blame game here; it just happened. We’ve got to get over it. We have to move forward. We can’t wait any longer.”

Becker said for the last four years, the Board of Education has “not had a lot of interaction” with individual schools’ councils. “That’s not a good thing to be doing. If we want somebody to be a part of the team, we need to make sure they’re part of the team,” he said. “… I will vow not to allow that to happen again.”

Etherington said the first step in improving community engagement is being transparent and open with the community. “We all have read the newspaper. And yes, oftentimes media is somewhat biased, or there’s a story there to be told. But we know the division that has existed in our school system,” he said. “… I hope as a parent … that anyone elected on this stage will work to be transparent and will work to earn the trust of every stakeholder in the Danville Schools.”

Etherington said during his 10 years at Danville High School, he served on and worked with the school council. “Unfortunately, at times, I don’t feel like we were listened to” by the Board of Education, he said. “It’s time that when our councils come before us, that we listen.”

Ben Kleppinger/ben.kleppinger@amnews.com Glenn Ball is a candidate for the Danville Schools Board of Education.

Ben Kleppinger/ben.kleppinger@amnews.com Steve Becker is a candidate for the Danville Schools Board of Education.

Ben Kleppinger/ben.kleppinger@amnews.com Aaron Etherington is a candidate for the Danville Schools Board of Education.

Ben Kleppinger/ben.kleppinger@amnews.com Paul Smiley is a candidate for the Danville Schools Board of Education.

Ben Kleppinger/ben.kleppinger@amnews.com Michael Strysick is a candidate for the Danville Schools Board of Education.
You Might Like

Delores Yocum’s job seems like it’s all fun and games. One day she may be playing Charades; another she’s coloring.... read more