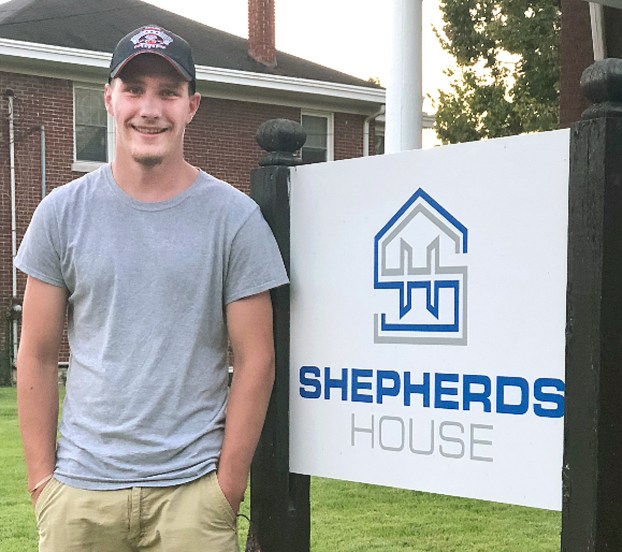 Photo by Robin Hart/robin.hart@amnews.com Zach Thomas, originally from Harrodsburg is about to graduate from Shepherd's House program in Lexington. He is also working at the restaurant DV8 fulltime and will be completing credits online to earn his Mercer County High School diploma, after dropping out of school last year, just four months before graduating because of his drug and alcohol addiction.

The success of a young Harrodsburg man’s battle against his demons has brought national attention to the nation’s drug addiction epidemic and how employers can help recovering addicts get back into the job market.

Zachery Thomas, 20, dropped out of Mercer County High School in December 2017 — only four months short of graduating. Zach had just turned 18; was hooked on methamphetamines, heroin and alcohol; had broken family relationships; and was homeless.

On Sunday, Sept. 30, of this year, NBC Nightly News broadcast an episode about Lexington restaurant DV8 Kitchen, showing Zach as a prime example of someone successfully working at recovering from their addictions, and how he was given a second chance in the workforce.

DV8 Kitchen is owned and operated by Rob and Diane Perez and was featured in a New York Times article in July because of its practice of hiring employees in recovery for drug and alcohol addictions. Producers of NBC news picked it up. 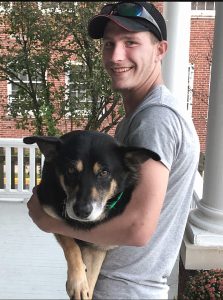 Photo submitted
Zach Thomas, 20, from Harrodsburg, is now living at Lexington’s Shepherd’s House. He is holding Shep, a dog that residents are fostering.

“Zach is the face of recovery in Boyle and Mercer counties. Look at just what happened in one year,” said Roger Fox, director of Danville’s Shepherd’s House, a non-residential treatment center.

About a year ago, Zach was 19 and sitting in the Boyle County Detention Center on drug charges. Fox said Mercer County Attorney Ted Dean recommended he be released to Shepherd’s House. But when he got there, he almost immediately relapsed, partly because he didn’t have stable housing, didn’t have a good family relationship and didn’t know how he was going to stay sober.

“He had a lot of barriers against him,” Fox said.

Instead of sending Zach back to jail, Shepherd’s House sent a staff member to stay with him while he was detoxing at a hospital. Soon, he had to be sent to Eastern State Hospital where his mental condition could be better assessed, Fox Said.

Because the Danville Shepherd’s House doesn’t have housing for its clients, they handed him off to the Lexington Shepherd’s House where he would have stable housing, accountability, employment opportunities and a larger recovery community to lean on, Fox said.

“He had nothing when he got out of jail,” Fox said, adding he had to be given a pair of shoes. “If he had stayed here, he would have ended up back in jail, or dead.”

Sitting in Fox’s office in Danville earlier this week, Zach relaxed on a large sofa, smiling.

His blue eyes are clear and bright. His “brother,” another client from Lexington Shepherd’s House, sat nearby. Zach said he isn’t ready to be in Danville or Harrodsburg alone yet. He’s afraid he would be tempted by his past.

“I can’t chance that today,” Zach said. But he can “grab one of my brothers and come back home for a little while and visit.”

One day he will be in a neutral spot in his life where, “I won’t think about the drug or the drink, but I’m not ready yet,” Zach said.

Working through the steps at Shepherd’s House hasn’t been easy. “Not every day in recovery is all butterflies and beautiful rainbows,” Fox said. “Some days it just sucks.”

That’s why working with other recovering addicts and alcoholics is so important at DV8 where Zach cooks 40 hours a week. “My job is awesome,” Zach says. But like every job, there are pros, cons and challenges.

Working anywhere else, his co-workers may not understand how dangerous it is to drink or get high after a bad day. That’s why working in an environment like DV8 is crucial for people like Zach, Fox said.

“The accountability there, the loving and nurturing there” is amazing, Zach said. The owners know their employees are temporary, and they will open doors to other opportunities once they are clean and sober and are back up on their feet. “They want to be able to be a reference” for other job and school opportunities, he said.

Fox added that DV8 is an opportunity for local businesses to see how they too could hire recovering addicts. “That’s one thing we definitely lack in Boyle County, is employers that are on board to hire people like Zach,” Fox said.

Zach started down his path of addiction at 13 with alcohol. He went from alcohol to pot, pills, heroin and meth by the time he was 15. His first court appearance was when he was in seventh grade — he had been caught selling marijuana on school property. 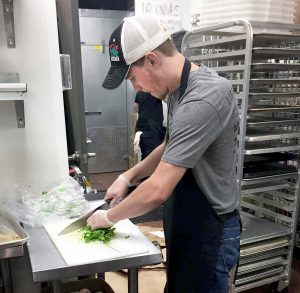 Photo submitted
Zach Thomas, 20, from Harrodsburg, chops an onion as part of his chef duties at Lexington restaurant DV8.

He said he tried hiding his drug abuse from his parents and stole from them to sell or trade for drugs.

When he turned 18, Zach dropped out of school and left home, but he continued to break into his mother’s house and steal to pay for his habit.

During that part of his life, he was angry and refused to take responsibility for any of his actions. He always blamed his drug and alcohol use on other people for causing him to feel like he needed to get high so he could cope with his life.

Even when Zach was given a place to stay and begin his recovery at Lexington’s Shepherd’s House, “I went through a lot of punches.” He felt everyone there wasn’t trying to help him, and that they were attacking him. He got into arguments with other clients and wouldn’t accept holding himself accountable for any of his actions.

Once he even got into an altercation with a staff member “and had to go drag a mat for a week at the homeless shelter…That was a humbling experience,” Zach said, shaking his head.

Zack said that in order to turn his life around, “After I got back from that … I became willing enough to do whatever they asked me to.”

After being at Shepherd’s House for several months, Zach has learned to accept his responsibilities “and take care of things you’re supposed to take care of in everyday life. I should have been doing that all along, but I wasn’t.”

Today, Zach has been given the opportunity to complete his high school diploma through online classes. And he’s even starting to plan for his future. He said he used to stress out about things that were “completely unreal. But today, I stress about the numerous opportunities I have to take.”

He was considering going to college or becoming an electrician. But he’s now thinking about going into counseling for addicts.

“I just know what path or road I want to do down …I know I’m going to be alright.”

A homeowner who is running a dog kennel out of his Harmon Heights residence off of Perryville Road could not... read more