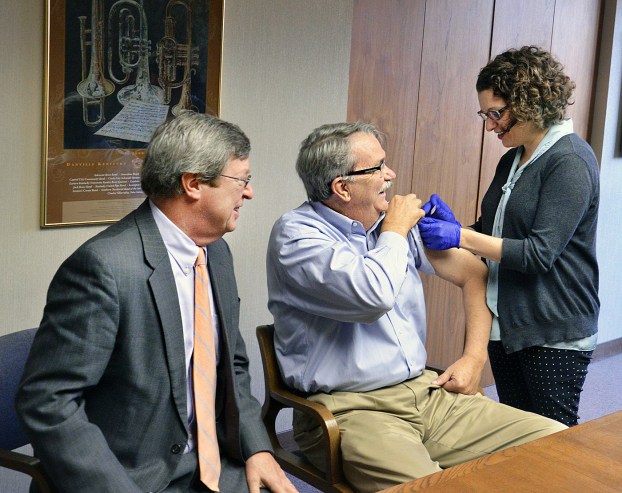 Photo by Robin Hart/robin.hart@amnews.com From left, Ben Chandler, CEO of the Foundation for a Healthy Kentucky laughs as Boyle County Judge-Executive Harold McKinney rolls up his sleeve to get a flu vaccination Thursday morning. Administering the vaccinations for severa local officials to promote getting flu shots was Dr. Rebecca Chatham, medical director of Heritage Hospice and Boyle County representative of the Kentucky Medical Association.

Focusing on the flu : Boyle officials get vaccinated, encourage public to do the same

Several local officials got together, rolled up their sleeves and were vaccinated against the flu in an effort to make the community aware of the importance of getting their flu shots this season.

On Thursday morning, Ben Chandler, CEO of the Foundation for a Healthy Kentucky, met with Boyle County Judge-Executive Harold McKinney, County Attorney Lynn Dean, Boyle County Schools Superintendent Mike LaFavers and Danville Mayor Mike Perros at The Advocate-Messenger and talked to them about why everyone should be vaccinated. At the same time, Dr. Rebecca Chatham, medical director for Heritage Hospice and representative of the Kentucky Medical Association, went around the table giving them their flu shots, which were brought in by Brent Blevins, director of the Boyle County Health Department. 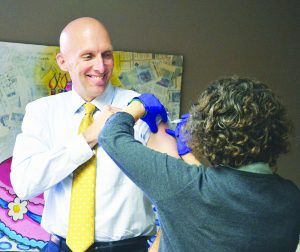 “The point is, it’s dangerous,” Chandler said. “This is not the common cold. A lot of people think that the flu is just a bad cold. It’s very much not that. It is a very dangerous virus that kills people.”

Only 38 percent of the population got vaccinated last year, which is one of the reasons there was a flu epidemic, Chandler said.

“We desperately want to stop the spread of the flu.” Chandler said it isn’t only an issue of keeping individuals healthy, but “it’s also a public health issue of the first order” because it spreads so rapidly and can very easily get out of control.

The flu “can be tremendously virulent and it can kill,” Chandler said.

The Foundation For A Healthy Kentucky is partnering with the KMA and public health directors across Kentucky to increase the number of people who get the vaccine, Chandler said. Their effort is titled, “Focus on Flu.”

This year’s flu vaccination protects against four strains of the flu, Chandler said. The virus is constantly mutating, so the vaccination may not protect you 100-percent. However, having the vaccination will guarantee that if you do get sick, your symptoms will be diminished.

The elderly population should especially get their flu shots “because they are particularly vulnerable” Chandler said.

He also stated it’s definitely a myth that getting the flu shot will give you the flu.

LaFavers said the Boyle school system is pushing for all parents, children, students and staff be vaccinated against the flu this year. He said the sickness can quickly and easily spread since so many people are in close proximity in the classrooms.

Perros said he’s gotten a flu vaccination for as long as they’ve been given. He said it is important that everyone in the community be vaccinated against the flu for the sake of the community. “And if you can prevent yourself from being sick, then why would you not?”

Kentuckians have only a few days left to register to vote in this year’s general election. Many in Boyle County... read more