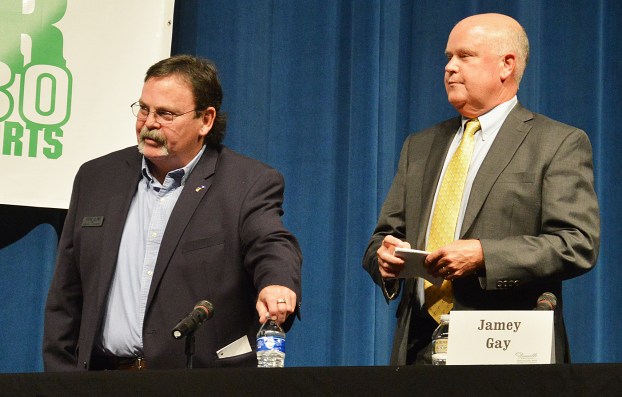 Thursday night was all about political races with no incumbents at Gravely Hall in Danville High School. In addition to a candidate forum for judge-executive candidates, another forum was held for Boyle County District 5 magistrate candidates Stephen Cline and Jamey Gay. The forums were organized by the Danville-Boyle County Chamber of Commerce.

In Cline’s opening statement, he talked about his career working with multi-million dollar budgets and team building. “I pride myself on my blue-collar work ethic and common-sense solutions.”

“I’m a citizen, not a politician,” Cline said. “I believe my life experiences has awarded me a Ph.D. in real-life solutions.”

Cline said he was most qualified “because I was born and raised here in town. I know my district. I know what the people want. And I know they don’t want their taxes to continually be raised.”

Gay said he has actively worked and served on many community agencies over the past 30 years and was a Danville city commissioner for 10 years. He said his priorities would be to serve as a steward of the county’s money, work to strengthen relationships between city and county governments; and advocate for Parks and Rec.

Gay said he’s the best qualified candidate because of his years of experience on the city commission. He said District 5 is the “hub of our history” and an “economic engine.”

“I think that experience as city commissioner will serve our fiscal court well in bridging the gap between communication issues with city and county.”

Cline said, “Absolutely. The EDP should have funded that workforce development. That’s the most important issue regarding our workforce. I just doesn’t make good business sense to turn your back on developing workforce when you’re trying to develop the economy.” He also said the county should financially help support the Boyle County Community and Technical College so that more students can get training so they can find good paying jobs, which would bring more jobs to the area.

The question was then asked, “Depending upon who you ask, we either need more jobs or more workers to fill the jobs that are currently available. Which is correct and why?”

Gay said “We need both.” There is a shortage in the local workforce which is challenging when trying to recruit new businesses, but recruiting efforts need to be ongoing, he explained.

Cline said, “I think we need people. We’ve got plenty of positions we cannot fill.” The county needs to establish more drug-abuse prevention programs that reach out earlier into the schools and homes, he said.

“We need a good workforce that can go out there and work eight, 10, 12 hours a day and not get somebody killed because they’re stoned, or sneaking out at break time and getting high,” Cline said. “That happens all the time in these factories. The positions are there, we just need to have a good, dedicated workforce.”

The candidates were asked what they believe is the most critical policy change that the fiscal court needs to make.

“The policy change that I would like to see the fiscal court change is have the meetings … get ’em out of the sardine can,” Cline said, referring to the small meeting room on the first floor of the Boyle County Courthouse that’s used for fiscal court meetings. “Let’s have a bigger room to where the public can come and voice their opinions and questions.”

Cline said he would also like to have an open mic where citizens can talk to their magistrates, and have the meetings recorded and posted for public viewing.

Gay said the first policy change would be to review and update the incentive package the county has to attract and retain businesses, especially for downtown. He also wants to look at incentives for residential redevelopment in the downtown area.

Cline was given the opportunity to ask Gay a question; he asked about Gay wanting to expand Parks and Recreation programs out into the county. “How are we going to fund that without a tax increase?”

Gay said it would be partially funded through fees and concession revenues. But “I think that it’s important that we continue to invest in Parks & Rec programs” because of its economic impact on the community.

On a lighter note, Gay said he didn’t really have a question for Cline, but since he sees Cline and his wife at a lot of 5K races, “I’d like to know what his fastest 5K time was.”

After some laughter, Cline good-naturedly responded, “Well, you can look at me. I am not a runner.”

Back on a serious note, Gay said the biggest issues facing District 5 is pedestrian safety, getting large truck traffic off of Main Street and promoting downtown growth through incentive packages for businesses.

Cline said communication between city and county governments was the most important issue, and ensuring services are not being duplicated, which could lead to unnecessary increases in taxes. He said most people prefer to have “a decent tax break as opposed to having a tax increase on funding Parks & Rec’s things.”

Concerning jail overcrowding, Cline said a recent study showed that the biggest factor causing the issue was the “judicial problems.” He said, “We need to address the guidelines as far as getting a person in court and out of court, out of the jail, back to work.”

Gay said his tour of the jail was “an eye-opening experience.” He agreed with Cline that the county doesn’t have control over the judicial system, but the county should work for more drug treatment programs. “I was encouraged at the last fiscal court meeting, at Magistrate Caywood’s urging, fiscal court is sending a letter to Judge Peckler hoping to encourage him to — and I think he needs to — engage in the conversation.”

About the issue of the jail keeping a portion of inmates’ money for canteen purchases and phone calls, Gay said, “I would be the first to tell you I really don’t have any idea about that situation,” and would have to research the practice before he would speak on the subject.

Cline said the jail keeping 50 percent of the money “is a little excessive.” He said he knows the money is used to offset some of the inmates’ medical costs, but “that just seems to be robbery. I would be more in-line with 10 percent increase.”

One of the biggest concerns historic property owners and preservationists often have isn’t all that complex: They worry about the... read more