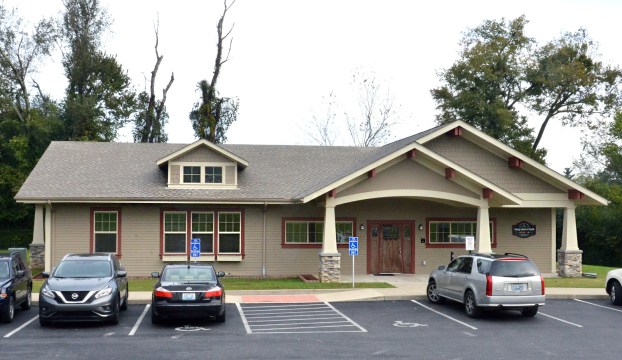 Photo by Robin Hart/robin.hart@amnews.com The Housing Authority administration building, at the end of Rosemont Avenue was officially named after long-time director Rachel White during a ceremony Tuesday morning. White was instrumental in having the building's architectural Mission style blend into the rest of the neighborhood.

Even though the Housing Authority of Danville moved into its modern, Mission-style office building more than five years ago, it wasn’t until this week it was formally dedicated and named after the woman who ran the agency for 30 years and retired in 2016.

A ceremony was held honoring long-time director, Rachel White, Tuesday morning. Family members, coworkers, retired employees, board members and friends applauded when the new sign was officially unveiled, naming the building The Rachel White Administration Building for the local housing authority. The building is located at the end of Rosemont Avenue off of Maple Avenue.

Board member Ann Young said it took nearly five years to get everyone together for the ceremony because White had been traveling extensively, board members had been unavailable and problems with a contractor needed to be resolved. But on Tuesday, the building was officially named. 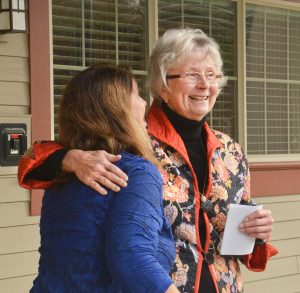 Photo by Robin Hart/robin.hart@amnews.com
Rachel White, director of the Housing Authority of Danville who retire in 2016, gives board member Ann Young a hug during a ceremony naming the building the Rachel White Administration Building, located at the end of Rosemont Avenue.

Young said the board had budgeted for a new administration building for many years but something always needed tending to, like replacing roofs or modernizing housing units, which caused the funds to be rerouted. The Housing Authority cares for 11 sites throughout the county containing 394 apartments.

“It’s very important that the money went to the residents to improve quality housing and quality programs,” Young said.

But in 2012, the money was budgeted once again and the building finally became reality when construction began. Move-in day was in January of 2013.

White and her staff had been working in cramped offices, which were two joined units in McIntyre Homes at the end of Queen Street. Young said residents had to walk through three offices to speak to the person they needed. And White’s office was inaccessible to many residents because it was upstairs, Young said.

The Housing Authority has owned the lot where the new building is now located for many years. “It was our tree nursery,” Young said.

The nursery was White’s idea, which worked out very well. Saplings were planted on the lot and when they were much larger, they were used in the landscaping at other Housing Authority properties all over the county, Young said.

It was important to White that the new building blend into the look and feel of the older neighborhood, Young said.

White said she was humbled by the honor of having her name attached to the building. “It certainly was not on my list of things to do when I started my public housing career as a housing manager for the Lexington Housing Authority in 1981.”

White had written a speech, but at the last minute declined to speak because she said she didn’t want to get emotional.

In the speech White was going to say her original goals were to provide quality housing for people and provide opportunities through strong resident programs.

She wrote that her first program she held “was designed to unite the residents, involved harvesting the fruit from the trees on site and cooking up a huge batch of crab apple jelly.”

She also wrote, “I was equally pleased with my next attempt, the community garden, but was surprised with unintended consequences in the form of turf wars among the gardeners over the best plots.”

White told the group that she was fortunate to have a supportive and informed board of directors and a great staff of workers.

She said the residents help make the community successful.

Fest on the Fork: A celebration of community