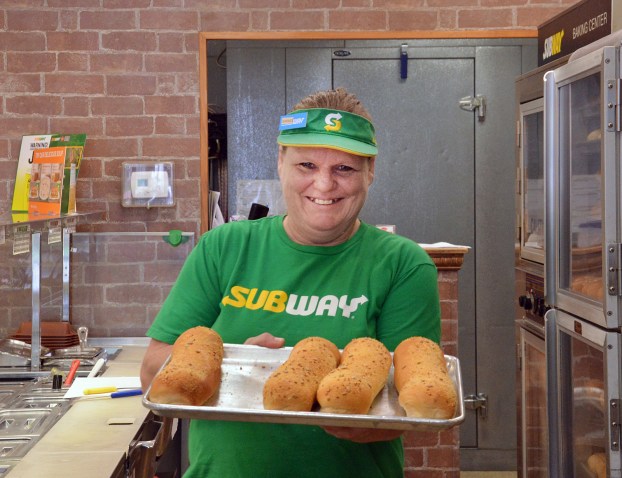 Photos by Robin Hart/robin.hart@amnews.com Jeannie Brewer is a sandwich artist and team leader at three of Danville's Subway shops. She bakes at least 100 loaves of bread a day.

Jeannie Brewer loves her job, her customers and God. 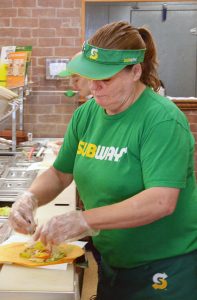 Photos by Robin Hart/robin.hart@amnews.com
Jeannie Brewer, who works most of the time at Subway on Fourth Street across from the Boyle County Courthouse says she knows most of her regular customers by name. And if she doesn’t, “I know their sandwich in my head.”

Whenever you see Jeannie making sandwiches at three of the four Danville Subway shops, she’s usually smiling and always welcomes her customers with a genuine question about how their day is going.

“I speak to everybody. I just love my customers … I don’t meet a stranger.”

Jeannie’s mornings start at 7:30, when she starts baking bread. “I bake at least 100 loaves a day.” She loses count of how many batches of cookies she slides into the oven. She said she bakes six dozen in the morning, then more every four hours.

She also starts slicing onions and tomatoes and makes sure all the ingredients are ready for the first sandwich to be built.

Many customers come by early or during their morning breaks to pick up their lunch and take it back to their offices to save for later. They don’t just come at lunchtime, Jeannie said.

Many of her customers are regulars, she said, and she’s gotten to know them as they stand in line. Two loyal customers come every morning, she said, and a few come two or three times a week.

“Oh we just talk about the weather, or sports or Jesus” if they want to, Jeannie said, as her favorite radio station, K-LOVE, plays uplifting music in the background.

She said even if she doesn’t know her customers’ names, “I know their sandwich!”

Jeannie has lived in Danville for eight years and she’s proud of her four grown children and 13 grand babies. Her daddy just had open-heart surgery in Lexington and it looks like he’s going to be fine, she said.

“I take pride in my work. It’s the easiest job I’ve ever had.” Even unloading the delivery truck on Tuesdays isn’t too bad, she said.

Jeannie has worked in the food industry for more than 20 years and said there’s been a lot of technical changes over the years, especially at the cash registers and with debit card readers.

Jeannie’s official job title is team leader and she’s a “sandwich artist” at Subway “because I can make a perfect sandwich.”

Jeannie Brewer, left works on a customer’s wrap sandwich as co-worker LeeAnn Confer starts to take another customer’s order from the oven at the Subway on Fourth Street in Danville.

Photos by Robin Hart/robin.hart@amnews.com Jeannie Brewer, who works most of the time at Subway on Fourth Street across from the Boyle County Courthouse says she knows most of her regular customers by name. And if she doesn’t, “I know their sandwich in my head.”
You Might Like

Danville school officials have been dreaming of a new softball field behind Bate Middle School for 17 years. The project... read more