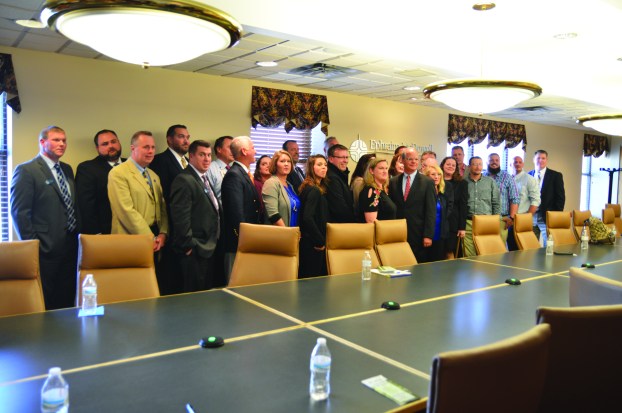 Bobbie Curd/bcurd@amnews.com A group of 25 or so health care professionals gather around Congressman Brett Guthrie for a group photo after an hour-long roundtable discussion on the opioid crisis, in relation to HR6 — a bill the House passed that is currently awaiting the president's signature. The legislative package includes Guthrie’s Comprehensive Opioid Recovery Centers Act.

Guthrie discussed his Comprehensive Opioid Recovery Centers Act, which was included in HR 6 — or the SUPPORT for Patients and Communities Act — passed by the House in September. The bill is “currently sitting on the president’s desk,” Guthrie said, expected to be signed into law soon. “We know the opioid epidemic is vast, it’s hit our state … seems to be from Appalachia all the way to New Hampshire … It’s everywhere, it’s every family. It’s more than opioids — we get it. But the legislation and some of the specific things were on opioid recovery centers.” 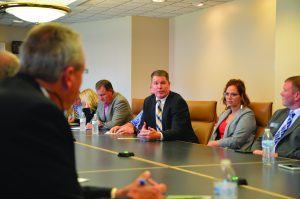 Van Ingram, director of the Kentucky Office of Drug Control Policy, was also in attendance, who Guthrie jokingly referred to as the state’s “drug czar.” Joining the meeting via conference call were representatives of SAMSHA, the Substance Abuse and Mental Health Services Administration, an agency of the U.S. Department of Health and Human Services.

Guthrie said his specific legislation within the bill focuses on “the idea that there are groups here who do fantastic work with faith-based and spiritual … groups here that do medical assisted training, Vivitrol — we want to try and encourage centers to look at all options, because not every option works for every person … sober living, job training — not just being a center that brings people in because you’ve got them for 28 days.”

Sophie Trainor, Guthrie’s senior policy advisor, said another provision of the bill that Guthrie authored with Sen. Mitch McConnell is based on implementing protection of maternal health and children born with neonatal abstinence syndrome — or NAS, conditions caused when babies enter withdrawal from drugs they were exposed to in the womb.

Trainor said another piece of legislation in HR 6 is called the Career Act, focusing on the workforce and housing in relation to addicts in recovery, but said no specifics would be known on how the act would be put into place until SAMSHA decides how to implement it.

Guthrie said over the period of developing the act, he’s learned there are “a lot of people who are just pure criminals, who do bad things and drugs are just part of their life … But what I’ve opened myself up to is there are people who have addictions, and if you take care of the addictions, you take care of the criminal,” and they need to be treated differently, he said.

Ingram said another part of changing mindsets is focused toward employers. He said with his background in drug enforcement, it’s taken a 180 from “zero tolerance” to working with area chambers of commerce to educate companies on taking chances on former addicts.

Ingram said with treatment for addicts, there are a lot of obstacles, but he feels HR 6 will help solve that. “A lot of Kentuckians … are on Medicare because of a disability, which has not been paying for substance abuse treatment. That changes with this opioid bill we’re waiting on the president to sign.”

Ingram said now with the State Opioid Response Grants, totalling about $30 million, the initiative has funding behind it. A good portion of that will go into prevention, he said, aimed to pay for curriculums to 86 school districts for anti-drug education; part of it will go into training medical professionals, since over-prescribing issues may still be a problem; treatment and recovery, including costs that fall through the cracks of Medicaid to extend stays in recovery, for instance, and childcare; housing/transitional living expenses; and employment skills training. 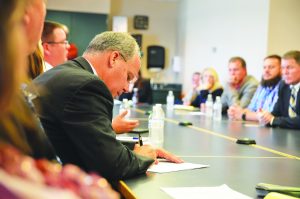 Thomas also said it’s difficult for transitional homes to get paid. “We basically depend on the communities we have our programs in to keep us funded … Then when this money comes loose, it turns out that everybody all the sudden has transitional living and starts applying for grants to start a transitional living program, and the people who have been doing it since day one, it kind of locks us out. We’re not molding (the program) to fit the grant, we’ve already molded it … but we’ve got to meet the grant where it’s at. So if I want to change my treatment philosophy, I qualify for some grant money. But if I don’t, I lose that grant money.”

Ingram chimed in that as a state, it’s frustrating because there are no regulations on what it takes to be a transitional living facility. “That’s something we’re struggling with.”

Another recovery specialist brought up how the focus is primarily on opioids, but that heroin and meth are back out on the streets, as well. Ingram seconded that, and said the meth being circulated recently is “cheaper to buy than it would be to make.”

Guthrie took notes for most of the discussion, and said the “coverage on this bill is incredibly important,” and he wanted communities to continue with feedback about how best to direct funding during the developmental stages, after the bill becomes law.

Confirmation came Thursday that a proposal to repurpose a 964-mile pipeline to carry byproducts of fracking has been taken off... read more