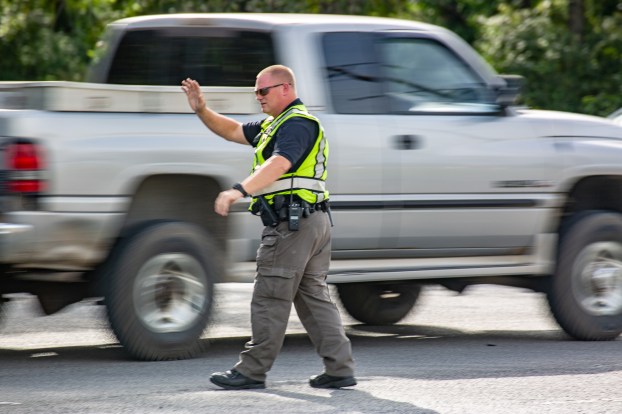 Boyle County Schools is adding a second school resource officer, and Danville Schools may do the same thing Monday.

The Boyle County School District’s Board of Education approved an agreement with the Boyle County Sheriff’s Office Thursday night to provide the additional officer, who will be primarily stationed at Boyle County Middle School, said Jennifer Broadwater, communications director for the district.

The district will pay the sheriff’s office $4,500 monthly for a contract that runs from November through May, said Chris Holderman, assistant superintendent.

The new contract is based off of the contract already in place for the school district’s current SRO, Ricky Sellers, Holderman said.

“The sheriff there has really been working great with us,” he said. “… We want somebody to be able to secure and keep our kids safe during the school day. That’s our main objective … but it goes beyond that. We want that person to be a real trusting person with our kids.”

“This is where all my grandkids go, so I have an extra interest in being out here,” he said.

Robbins said his office has been providing Boyle County’s current SRO position for years and began providing officers for SRO work in the Danville School District this year, after the Danville Police Department announced it did not have the manpower available to provide an SRO.

Now, Boyle has approved the contract for a second SRO and the Danville Board of Education may do the same thing at its regular meeting this Monday, Robbins said.

Figuring out how to provide four SROs has been quite a task, the sheriff said. In order for it to be affordable, there have to be retired law enforcement officers like Thomas available. Retired officers are able to work full-time without receiving retirement or insurance contributions, as long as the sheriff’s office hires them on one-year contracts and notifies the state, he explained.

“It’s a learning curve right now, because we’ve got four total school resource officers … that’s almost half of our patrol force. We’ve only got 10 guys that work a (non-SRO) shift,” Robbins said. “That’s a whole different almost division that we’ve incorporated now, that we’re going to have to figure out what they need and how to budget … we’re definitely learning as we go right now.”

But Robbins said he’s made the budget work so far and he thinks it’s worth it.

“I’ve got kids that go to school and I know it makes me feel a lot better when there’s an armed law enforcement officer in the schools protecting them,” he said. “… Nobody is exempt from senseless violence.”

Holderman said Sellers and his K9 partner Petey are regularly waiting outside Boyle County High School to greet students as they arrive and Sellers has done an excellent job of building relationships with students and teachers. The Boyle district hopes Thomas will be able to similarly become a member of the school community.

The sheriff’s office and school district both understand that an SRO’s role is not to “get kids” who are misbehaving, Holderman said. 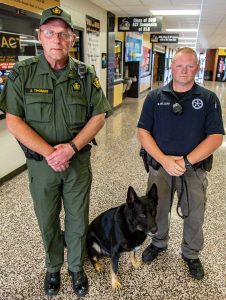 Ben Kleppinger/ben.kleppinger@amnews.com
J.T. Thomas, left, will soon begin serving as the second SRO in the Boyle County Schools, along with Ricky Sellers, right. Sellers also has a K9 partner, Petey, who Sellers said is the only dedicated SRO K9 in the state of Kentucky.

“That’s not what it’s about. It’s about having a certified police officer in the building and letting our community know and even our kids know that in today’s times, we want you to feel safe here,” he said. “They love you, they care for you, and they’re here to protect you — and teach you, as well.”

Thomas will have an office at the middle school, but he will be asked to help out at all of the district’s schools. “This will really alleviate a lot of that pressure” currently on Sellers’ shoulders as the only SRO, Holderman said.

Sellers confirmed as much Friday, explaining how trying to provide services to all six schools in the district — including the alternative school — is a tough job for one person. He said there’s around 3,000 people on the school district’s properties daily — “that’s like a small city.”

Holderman said the district is still planning to add a third SRO, as well, which is called for in the strategic plan.

“We’re still working on that with the sheriff right now. One of the issues right now for him is finding that certified person that can fill that role,” he said.

Holderman said it’s possible the third SRO will be in place before the end of the current school year or by the beginning of the next school year.

“It’s not something that we just want to try to figure out overnight,” he said.

Robbins said the third SRO for Boyle — which would be the fifth employed by the sheriff’s office — is still an idea in the works.

The additional SRO is one of several changes being made according to a school safety strategic plan the Board of Education adopted this year.

Another big change being implemented now is a new visitor management system, which will be active on Wednesday, Oct. 24.

The “Raptor Visitor Management System will allow safety personnel and administrators to know who is in every school, every day; and will verify the identity of visitors, keep track of check-in and check-out times and print custom visitor badges,” according to a FAQ from Superintendent Mike LaFavers being sent home with students on Monday.

“Raptor helps schools keep unwanted visitors out and track visitors that have been allowed in,” according to the FAQ. “By proactively alerting personnel to specific potential threats, Raptor allows school administrators and law enforcement personnel to take appropriate steps to keep students, employees and visitors safe. The system also prints badges that include the visitor’s name, photo, date, time and destination. These badges enable personnel within the building to quickly determine if visitors are in areas where they should, or should not, be.”

On their first visit, visitors will have to present a government-issued ID such as a driver’s license, military ID or passport in order to enter any Boyle County school, according to the FAQ. “Individuals will not be allowed to access school areas beyond the office without presenting an acceptable form of identification.”

The system records each visitor’s name, birthdate and photo “for comparison with the national registered sex offender database and a custom database containing private alerts specific to the school.”

On subsequent visits, an ID scan will not be required — “Office personnel may find the visitor’s name in the system and sign the visitor in manually,” the FAQ states. “This makes check-in much easier after the initial visit.”

The FAQ notes teachers and students will not use the system and the system “will only be used while school is in session, Monday through Friday.”

LaFavers and Holderman provided the Board of Education with an update on implementation of the three-year, $415,000 safety plan at Thursday’s meeting, according to Broadwater.

“The safety of our students and staff is a top priority and administrators are moving quickly to implement the approved plan,” the safety update states. “We are working hard to create a balance between having a friendly welcoming atmosphere and securing our buildings from unwanted intruders.”

Other safety improvements noted include:

• New surveillance cameras and alert sensors “will be installed on exterior doors across the district” later this fall.

• Work is continuing to develop student “connectedness,” in an effort to make sure students “across all grade levels are participating in regular happiness, resiliency, upstander and bully prevention lessons.”

• Faculty have been trained to spot signs of mental illness and on the “run-hide-fight” strategy for reacting to an active shooter.

• Staff are required to wear name badges and classroom doors are kept closed and locked during class.

• The district is maintaining a 100-to-1 student-to-supervisor ratio during non-instructional time.

The Kentucky Civil War Sites Association has released its “Kentucky Battlefield Study” that illustrates the economic and tourism benefits of... read more