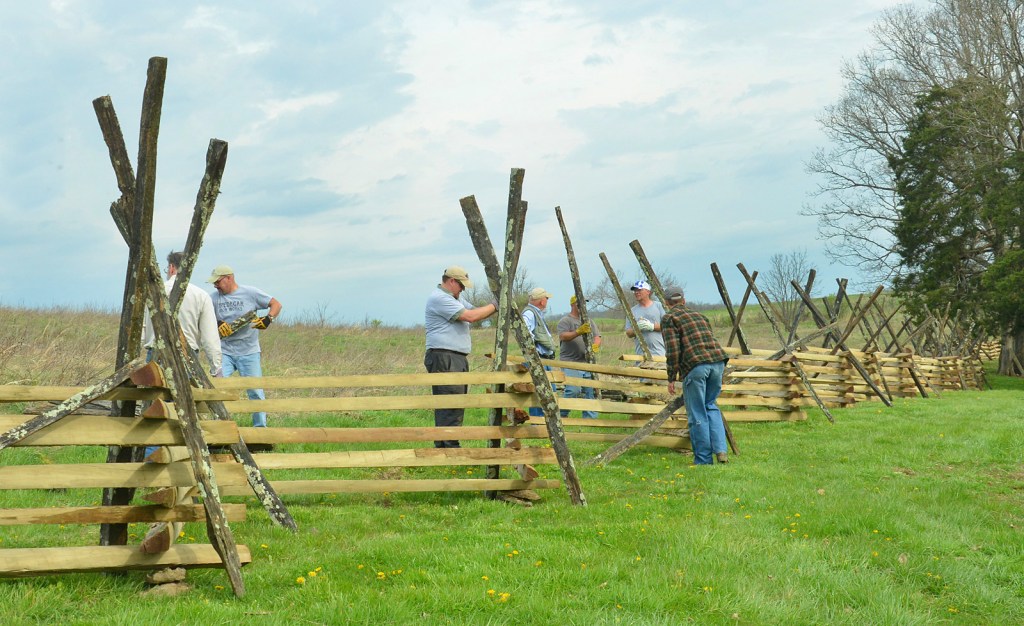 File Photo Several members of Friends of Perryville Battlefield, work together on Maney's Ridge last spring replacing rotted rails with new ones while older rails that were still in good shape were used at the cross rails. The Friends organization raises money and works to keep the historic site in good shape for tourists and to preserve the hallowed ground of the battlefield.

The Kentucky Civil War Sites Association has released its “Kentucky Battlefield Study” that illustrates the economic and tourism benefits of Kentucky’s Civil War and Revolutionary War battlefields as well as war-related historic sites have on state and local economies. And Perryville Battlefield State Historic Site is a prime example of how “battlefield tourism” has a substantial impact on this area.

Joni House, director of Perryville Battlefield and KCWSA president, said the study is based on results from the 2017 Visitor Survey, funded by a grant from the American Battlefield Protection Program (ABPP) of the National Park Service.

She said because battlefield tourism is important to local economies, “Historic sites need a dedicated funding stream to remain viable and support tourism activities in the commonwealth.”

Visitors to Perryville Battlefield and the city of Perryville had an average economic impact of about $2.5 million in Boyle and surrounding counties, based on the survey statistics, House said.

Julie Clay, a Perryville council member and staunch supporter of the Friends of Perryville Battlefield, said the KCWA’s economic impact survey “shows why it’s necessary to develop tourism in the western end of Boyle County. … We need to be able to capture all of this (tourism dollars.)”

The KCWA’s survey is going to be a “lobbying tool” to show state government officials that “these sites matter to their areas,” not only economically, but culturally as well, Clay said.

On Friday, House, as KCWSA president, along with Adam Gillenwater, state and local relations manager with American Battlefield Trust from Washington, D.C., testified on the importance of battlefield preservation to local economies before the Interim Joint Committee on Tourism in Frankfort.

“We want to make sure the tourism folks who are setting the budgets understand how important these sites are,” House said. “But it’s not just about the money.”

She said the battlefield site officials are “stewards of those places. Military sites are Kentucky’s call to arms. Without them, what would Kentucky be? They are national treasures,” House said. Preserving battlefields is a way to “speak for the veterans” who lost their lives fighting to make America what it is today, she said.

Also, because Perryville Battlefield  “is far off the beaten path,” the popularity of The Bourbon Trail “has been a big boon to us,” because as travelers pass through Perryville, many are now discovering the site as they travel to distilleries on the trail, Clay said.

And since the Civil War battle was also fought in the city of Perryville, “the battlefield is good for everybody. People don’t realize what goes on at the battlefield. They have no idea how many people visit there,” Clay said.

There are between 12,000-15,000 visitors who “walk in the door at the museum,” House said. And there are certainly many more who visit the site without signing in, she added.

“Our economic future is in our past. The survey makes this incredibly clear,” Clay said.

Jennifer Kirchner, executive director of the Danville-Boyle County Convention and Visitors Bureau, said, “The staff and Friends association do amazing things with very little to keep that nearly 1,100 acres looking as it does. But each of us need to contact our legislators and voice our support and appreciation for the site. The state park system has less and less resources to support parks and often the historical sites don’t get the allotments needed. This study will hopefully help us convey the value and generate support.”

According to the survey, visitors to Kentucky battlefields and historic sites contribute more than $10 million annually to local economies. Also, out-of-state tourist spending boosts the state’s GDP by $7.1 million and generates more than $1 million in state and local tax revenue.

It shows six out of 10 visitors were not from Kentucky, and were from 43 other states and five countries during the survey period, from April to October 2017.

The majority of visitors traveled more than 200 miles to the site.

The typical traveler spent an average of $258.30 in the local area of the site, with lodging and food accounting for about half of the total amount spent. Overall, nearly half of all visitors paid for one or more room nits in the area during their visit.

Overnight out-of-state visitors to Kentucky battlefields and related historic sites add about $7.45 million in spending to the Kentucky economy.

Overnight visitors who live in Kentucky add roughly $2.09 million in spending to those particular communities economies due to the presence of these battlefields and related historic sites.

Kentucky residents who visit battlefields and related historic sites who stay overnight in paid lodging have an economic impact of  supporting 42 jobs with labor income totaling $1.1 million and value added of $1.8 million.

Out-of-state day trippers add about $485,000 in spending at the areas around the sites.

For more than half of all visitors, visiting the specific historic site was one of the main reasons for coming, including three out of 10 who said it was the primary reason they came to the area.

Kentucky residents visiting the state’s battlefields who stay overnight in paid lodging also have an economic impact on local communities surround the site, the report says. While the money spent is just a redistribution of  spending from the state’s point of view, to those local communities it’s “new money.”

Of Kentuckians surveyed, 65 percent strongly support the use of tax dollars being spent to preserve Kentucky’s battlefields and related historic sites in the state.

Visitors were relatively affluent, with 42 percent having an annual income of $75,000 or more, including 22 percent with an income in excess of $100,000. Overall, site visitors were well-educated, with the majority having at least a four-year college degree, with more than 20 percent having studied beyond college.

Civil War and Revolutionary War sites in the Commonwealth were nearly universally enjoyed by visitors according to the survey. Ninety-eight percent had a positive experience at the site they visited, and more than nine out of 10 would likely recommend a visit to the site to friends and family.

“Being here makes understanding it (the history) much easier than reading from a book,” one visitor wrote.