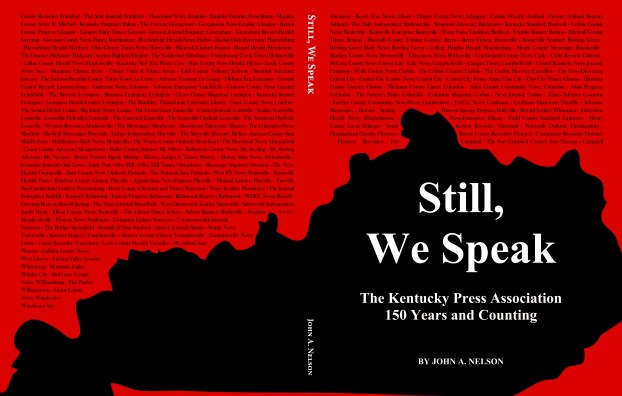 John Nelson says many will be surprised by the role Danville has played in the history of the Kentucky Press Association when they read “Still, We Speak.” The book he spent the last year and a half writing will be published soon in celebration of KPA’s 150th anniversary.

Nelson came up with the title from James Marrs’ tombstone in Danville’s Bellevue Cemetery, which reads “Who being dead yet speaketh.”

Marrs was an editor of The Kentucky Advocate, now The Advocate-Messenger — of which Nelson is a former executive editor.

Sitting at his dining room table in Boyle County, Nelson thumbs through the first published draft of the book, reading aloud certain passages. Marrs, he explains, was editor of The Kentucky Tribune during the Civil War, and wrote “biting editorials” on the side of Gen. George B. McClellan (a Democrat) against President Abraham Lincoln. Federal officials first censored Marrs, but he refused to back down and was banished from Kentucky. Eventually, he would return and become editor of the Advocate, now located across the street from the property where the Marrs’ home was in the 1800s.

Marrs was an organizing officer of the KPA in January of 1869; Nelson was KPA president in 2004. 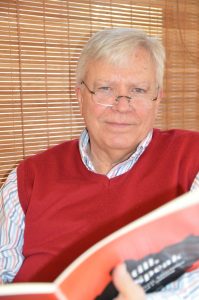 Bobbie Curd/bcurd@amnews.com
John Nelson reads from the book he wrote, “Still, We Speak,” highlighting 150 years of the Kentucky Press Association. Nelson is former executive editor of The Advocate-Messenger, and was KPA president in 2004. The book can be pre-ordered before it will be debuted in January during the association’s convention.

“In the early days, what really struck me was newspaper editors and publishers were held in really high regard,” Nelson says of his research into the association’s past. Editors knew they had power, and they took advantage of it. Cities and states would lobby them to have their conventions, putting them up in citizens’ homes, wining and dining them. They began taking country-wide junkets, dragging along their friends and families on all-expense paid trips courtesy of railroads, given the royal treatment wherever they went.

Although KPA members “debated the propriety of those practices” known as “deadheadism” (accepting the free rides), the practice continued for some time.

In 1889, newly adopted bylaws were introduced during KPA’s convention in Danville. “The residents of Danville were alerted to a new day … ‘given to understand that no longer were editors expected to be entertained by them free like preachers,” an excerpt from Chapter 2 reads.

Nelson did much of his research at Margaret I. King Library on the University of Kentucky’s campus, reviewing editions of The Kentucky Press, a monthly magazine the association published.

“You have to reserve them and look at them in a certain area — I felt like they were going to ask me to wear gloves,” Nelson jokes. He went through several years’ worth, page by page, transfering what he found interesting onto PDFs. When he got into more recent years of KPA’s history, he was able to find a few people who were still alive, and spoke to them.

“Not many, but a few. They helped me set the stage on some of the latter decades.”

KPA’s executive director, David Thompson, hit Nelson up for the honor of writing the book.

Thompson said there was never a doubt in his mind about who to ask. “No one else could’ve come close. I couldn’t have done it; I’m not the writer John is. He gets into the research of it, and talks to people — it was a perfect fit.”

Although the book is more focused on the association, it’s also about the newspaper people who help make KPA what it is today, Thompson said. “He brings out the personnel who were involved, the people and their personalities … He puts it all together, the things that transpired — both good and bad.”

Nelson, looking through the book, talks about separations during the Civil War; effects on the industry from the Great Depression; the first black newspaper being accepted into KPA; women’s roles in the industry finally being recognized …

“The other thing that stuck out to me — the same old fights with government have gone on since the beginning, ” Nelson says, from legal advertising about its activities to the fight for open meetings and records. “KPA managed to pass KRS 424, which deals with legal advertising, and it was seen nationally as a model — some in the industry called it a miracle that they were able to get this passed.”

Thompson said Kentucky has the largest press association in the country, with almost half of its members women now. Mary Schurz, longtime editor and publisher of The Advocate-Messenger, was one of KPA’s first female presidents in ‘92.

Nelson continues thumbing through “Still, We Speak.” Newspapers and the KPA have changed greatly over the years, he says. The association, editors and publishers have rolled with several tides of change, from the the early beginnings of prominent standings; through a war-torn and divided country; and into the new century of “technological nightmares,” which still affects the industry.

“This was very satisfying,” he says, still reading across the labor of love, bound by a red cover featuring the state’s shape surrounded by all of the member newspapers’ names — a design by artist Colleen Jones who Nelson says “nailed it.”

“I learned so much, and it meant a lot to me to be able to do that.”

Looking down through his reading glasses, he hits page 36. D.M. Hutton, he says, was the oldest living KPA president during its 80th anniversary celebration in 1949; he was the editor of The Harrodsburg Herald and KPA president in 1918. Although the highlight of that meeting is noted as being Hutton’s speech, Nelson reads an excerpt of the introduction given by Mrs. George A. Joplin Jr. of Somerset, which included how Hutton wrote the Kentucky Press Code of Ethics.

“‘It is very difficult for the individual who edits a newspaper to ever get away from it. It haunts him like an old melody; it remains with him like the memory of his mother; it is the warp and woof of his life.’ Boy. Isn’t that the truth,” he says, taking off his glasses.

To preorder “Still, We Speak — The Kentucky Press Association, 150 Years and Counting,” visit kypress.com or call (502) 223-8821. Preorders will receive a discounted price through Jan. 14.

Danville’s four current city commissioners and two challengers hoping to take a seat on the commission came together on one... read more