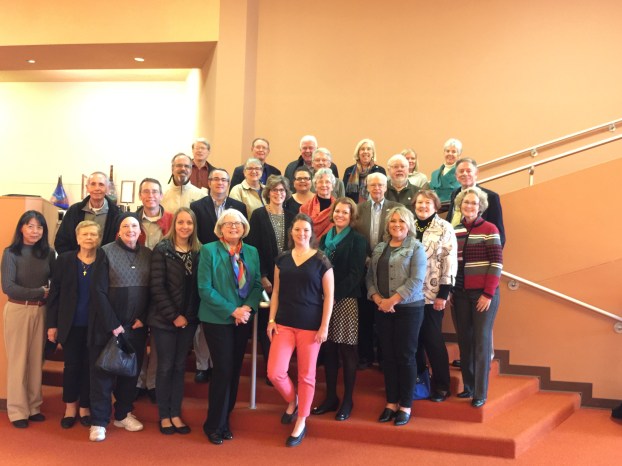 The Danville Sister Cities Commission met with representatives from 11 other Kentucky cities at Norton Center for the Arts Friday to share ideas and discuss goals. Milton Reigelman, who serves on the commission, described it as an annual “think tank” of sorts.

Reigelman said the meeting was run by Kay Sargent, executive director of Lexington Sister Cities and the Kentucky representative for Sister Cities International.

“This meeting is held annually to provide a state-wide communication and support network, in order to share ideas, experiences, expertise, materials, programs and all aspects of Sister Cities relationships,” Sargent said. “It is also designed to help Kentucky cities begin or develop a Sister Cities program.”

According to a news release provided by commission member Mary Beth Touchstone, the topics ranged from youth and exchange programs, language education and fundraising during the 2018 annual state meeting. Sargent said presentations were held highlighting all of these areas.

“We discussed how a pebble thrown into the pond creates ripples,” Reigelman said. He used the case of local playwright Liz Orndorff’s stint as the first artist to go to Carrickfergus, Danville’s sister city, who came back and wrote two plays that were later produced locally, and how she met the Uplift folks, who have returned every summer to offer a camp at West T. Hill Community Theatre.

“And how families have gotten to know each other in exchanges,” Reigelman said, as well as the many positive reactions after Belfast artist Dee Craig spent time here this summer. He said some great ideas were received from different groups about how to proactively approach fundraising, as well.

A big spotlight was given to pulling more youth into the commission’s programs, including getting local youth artists into a national competition. The annual competition offers a hefty cash prize, and winning artists’ work is featured at the Sister Cities International meeting, as well as in traveling exhibits. Reigelman said details on how this would be started locally are still being discussed, but it would most likely include a juried competition.

“Lexington has been very involved in that, and we haven’t been, so we’re probably going to move into that,” he said.

They also discussed getting more into student exchange programs.

“Centre College has an exchange with Northern Ireland, but we discussed a high school and middle school exchanges, whether that be for a week, a summer or a semester,” he said.

Getting youth more involved in Sister Cities has been on the radar for a while now, he said.

“The core goal, as Eisenhower put it when he created the program in ‘56, is to build citizen diplomacy. To have students think wider than just their own school, or even their own country, and create artworks — and students love to do that. We have great programs here with the Community Arts Center, and with the local schools,” he said.

Reigelman said a competition like this would serve to build up students’ resumés, especially those who would advance on to the national level.

Another topic was how to develop a more vibrant social media presence for Sister Cities, including energizing its message on various platforms and improving its website to keep it current and lively.

“That goes along with reaching the younger folks, too,” Reigelman said.

Reigelman said there were more people from more cities at the Danville meeting than there’s ever been at a state meeting before. Groups were present from Lexington, Owensboro, Morehead, Louisville, Elizabethtown, Pikeville, Somerset, Frankfort, Lawrenceburg and Midway.

“Louisville has nine sister cities; Lexington has four. Other than those, we’re the most active sister city in the group of the state — they get their ideas from us each year. We had seven from the Danville group in attendance, since it was held right here,” he said.

Reigelman said there’s also been an emphasis in having third-world sister cities as well, particularly in Africa. “There are sister cities in most countries now … I mean, I don’t believe North Korea has one …”

The meeting wrapped up with a visit to Elmwood Inn Fine Teas, where Reigelman said Bruce Richardson explained how tea is considered the “international communal drink,” and the group was also able to take in the new “Diversitea” mural, created by Craig, who was this year’s exchange artist though the commission.

Sargent said, “It was a highly successful meeting and we thank Danville for hosting.”

The battle over how much the Danville Kroger property is worth is not over yet, and Boyle County’s Property Valuation... read more