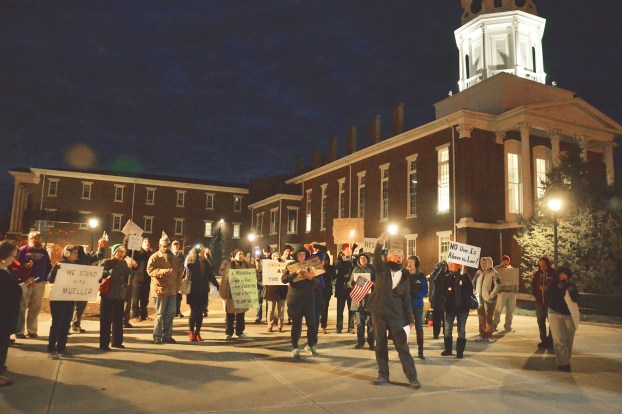 Amy Jones carries two signs during Thursday night’s nationwide protest where a group of about 60 local activists gathered in front of the Boyle County Courthouse.

Photo by Robin Hart/robin.hart@amnews.com Bob Fieberg holds a sign during Thursday night’s local protest which was part of a nationwide protest.

Joni Lukins holds a sign in support of Robert Mueller and his special investigation into possible Russian interference in the 2016 U.S. presidential election.

Dana Bullock holds a sign stating “Nobody is above the law” and “Protect the Mueller probe” during Thursday night’s nationwide protest.

Dana Bullock holds a sign stating “Nobody is above the law” and “Protect the Mueller probe” during Thursday night’s nationwide protest.

A group of about 60 local political activists joined a nationwide protest in support of protecting Special Counsel Robert Mueller’s investigation into Russian interference in the 2016 election Thursday night. It took the group about 12 hours to organize, get the word out and make signs in order to participate in the nationwide event, said Julie Pease, who was one of the participants.

The protests were in response to President Trump installing his longtime ally, Matthew Whitaker, as acting attorney general, taking over the oversight of the Robert Mueller investigation from Deputy Attorney General Rod Rosenstein.

The activists demanded that Whitaker recuse himself given his conflicts of interest and previous statements attacking the investigation.

The protests came two days after congressional Democrats won back control of the U.S. House on a promise to investigate the Trump administration and President Trump fired Attorney General Jeff Sessions.

The nationwide protest was organization by a coalition of hundreds of public interest organizations.

Text and photos by ROBIN HART

The large Earth sculpture in the parking lot of the Boyle County Library seems to be floating in place with... read more