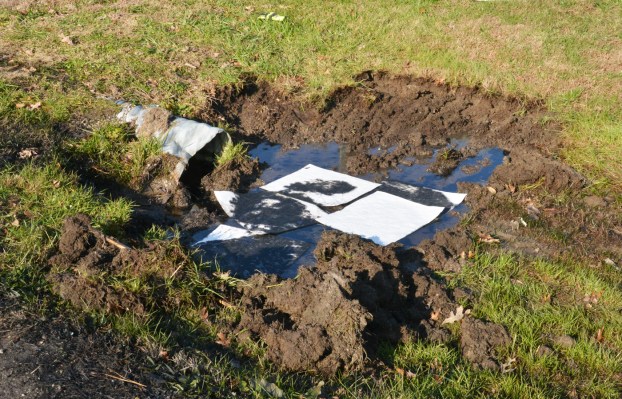 Photo by Robin Hart/robin.hart@amnews.com A puddle of some kind of black petroleum product, mixed with rain water is in a drainage ditch on the side of White Oak Road.

JUNCTION CITY — A portion of White Oak Road was closed for most of the day Wednesday, due to an environmental clean-up process, according to Emergency Management director Mike Wilder.

Wilder said he received a call about a possible oil spill in a drainage ditch on the side of White Oak Road Wednesday morning, so he went to check it out. He said the “incident” may have been there for about a week before anyone reported it.

A representative from the Environmental Protection Agency Emergency Response Team was called in and a plan was formed on how to clean up the mess, which looked like a wide puddle of oil at one end spreading out to a path of black, oily grass, about 5 feet wide and 100 yards long beside the road.

Because of heavy machinery needed to dig out and haul away the contaminated dirt and replace it with “clean” dirt, Wilder shut down White Oak Road between West Knob Lick and Worldstown roads to traffic.

Wilder said Wednesday morning they weren’t sure exactly what kind of petroleum product it was they were cleaning up, and they may never know how it got there.

A public mural that has already been installed was approved by the Danville Architectural Board to allow additional elements. The... read more