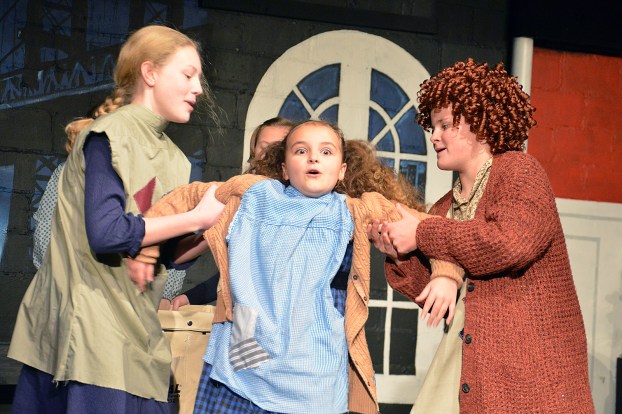 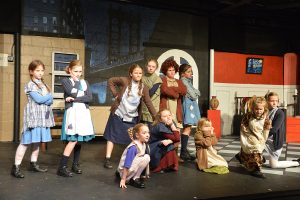 Photos by Robin Hart/robin.hart@amnews.com
It’s a hardknock life for Miss Hannigan’s orphans in “Annie Jr.” The cast is 31-kids strong, featuring some in their very first roles. “It’s an important time to support our children,” says Managing Director Karen Logue.

“We hit an all-time record with 98 kids auditioning for this show,” says Karen Logue, managing director. She’s not all-together sure exactly where that magic came from — maybe the “new golden age” of musical theater?

“But honestly, ‘Annie’ never dies. I think it’s just the popularity of the show, overall,” she says.

Thursday, 31 kids ages 5-18 will take the stage to open up the musical, which runs Thursday-Sunday through Dec. 9. The “Jr.” adaptation is specifically edited in a more condensed version to be performed by kids.

“We were very happy — we could’ve cast it three times over,” Logue says. She went through a process of elimination, just based on scheduling conflicts, for the most part.

“I wish we could have given them all roles, but I love that so many came out,” Logue says.

“Annie Jr.” is not really a “Christmas show,” per se, but the second act does take place during Christmas.

“The main reason to come see this show, I would say, is because there are some incredibly talented kids,” she says. Maya Smith plays Annie, someone Logue has watched for years as a singer during the Shamrock summer camp offerings at the theater.

“I knew she sings like a house on fire, but didn’t know if she could act,” Logue says, and has been pleasantly surprised. “She’s worked so hard and has been a gem to work with. And her voice is just incredible.”

Logue says Elijah Brown, who debuted in “Oliver Twist,” cast now as Daddy Warbucks “is just perfect. They’re the two anchors, and they do so well together. Everyone else is just icing on the cake. We have a lot of chorus ensembles, they’re really great. All the kids have great personalities and have worked so, so hard …”

Another reason to come check the production out, Logue says, is merely for the costume visuals. “Alice Berka, my assistant director/stage manager extraordinaire did that. She never says no to me, so I’m going to keep asking her until she does …”

Berka put together storyboards for the kids to get a good view into fashion, circa 1933. “She does that so the kids and the parents can have examples, and lets them know if they can’t put something together at home, or from going through their grandparents’ closets, the Salvation Army or Goodwill, she will help them make something.”

Logue said although costumes are the vision of Berka, putting them together have very much been a team effort. “Parents have been great with helping to find things, and it’s been fun for them, too. There have been years in the past where Alice has made every stitch, and she’s priceless,” Logue says. But she finds it “even more meaningful” when the parents and children can work together on them.

“The costumes are great, that’s all I can say — so authentic …” 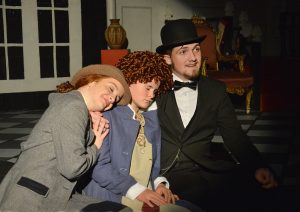 From left, Molly Boyle, Maya Smith and Elijah Brown in a scene from “Annie Jr.” Director Logue says it’s been impressive watching the hard work the young cast has put in gearing up to Thursday’s opening night.

Logue interrupts herself. “The set! Oh my gosh, the set. You gotta talk about the set — Brandon Long,” she says, about the local artist who’s creative director for the Community Arts Center. But he does set design as a board member for WTH, and on his own time.

Logue told Long what her vision was, and how she needed the most space possible to work with, in order to maximize scenes and fit in the whopping 31-member cast. Dale Kihlman, also a board member, and Kolton Winfield, WTH’s community outreach director, built the bunk beds.

“If you leave the black brick wall the way it is, it’s so one-dimensional and so not fun. I told Brandon that — he gave me a look and was like, ‘Hmmm.’ Then he created magic.”

Long used the black of the brick wall as “his night,” Logue says, and painted the Brooklyn Bridge, outlined in blue. He also created a three-dimensional look by painting windows, with the corresponding skyline peeking through.

“That artistry …” Logue takes time to search for the right phrase. “I mean, it’s just beyond me. He’s unbelievable.” The other side of the stage, which functions as part of the Warbucks mansion, is meticulously layered with books on shelves, free-hand painted by Long, with a “fancy mansion flooring” he created by taping the area off and painting it to resemble large tiles.

“Again, he’s doing all of this on his free hours, he’s on the board and he’s done it for us before, but this is extreme. We’re just so grateful.”

As long as weather will permit, carolers will be out front of the theater on opening night, Thursday, before the show.

“This will be some of these kids’ first time on stage. Even if you don’t have a child in this, or know someone who’s in it, it’s well worth your time and effort to check it out,” Logue says. “They’ve worked so hard. We need to support children now more than ever. And tickets are going fast, already, for the first weekend!”

Delivering the day’s message with no clashing bells: Capt. Richmond works to make a difference

The Salvation Army’s red kettles and bell ringers are a part of the holiday season every year in cities and... read more