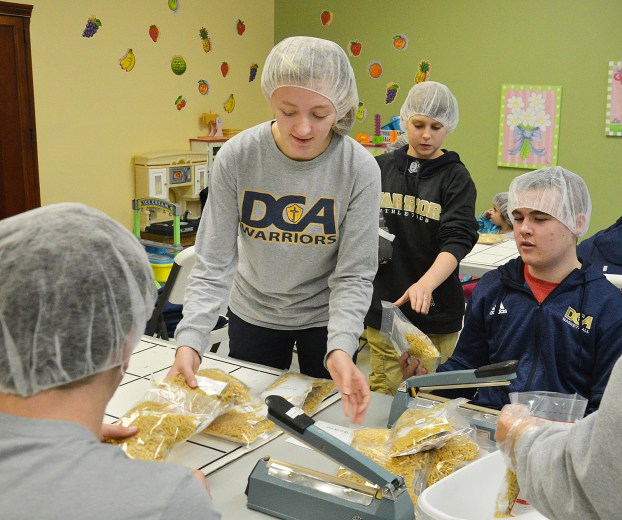 Students at Danville Christian Academy packaged meals for 10,000 people as a way to participate in Giving Tuesday yesterday.

Giving Tuesday was created as a national movement to have a day of charitable giving on the Tuesday after Thanksgiving. So this year, students at DCA had a food packing day, using raw ingredients purchased from Meals of Hope, said organizer Carroll Neely, who has a child attending DCA. The school funded the project with the help of financial donations from Grace Church and Danville Church of God.

The school will be giving 30 cases of a fortified pasta tomato meal they put together for the local Backpacks for Kids feeding program through the Family Resource Center. Each case contains 32 packaged meals that feeds six people, so the total number of meals given to local students and their families is 5,760.

Neely said Meals of Hope offers several types of meals that organizations and schools can purchase, package and distribute to wherever they see fit. After researching what’s offered, she decided on the tomato pasta meal for two main reasons. First, she said, was that only a pot of boiling water was needed to make the meal.

Second, Neely said children who participate in the schools’ backpack food program sometimes only have one meal a day, so it’s important that it be as nutritional as possible and since the tomato pasta meal was fortified with soy protein, it was a good choice.

Then on Tuesday, students in grades preschool through high school formed two assembly lines, put on hair caps, sanitized their hands, slid on plastic gloves and began the project. Neely said it would take most of the school day for every class to have their turns putting the meals together.

“This is a good opportunity for the students to give back,” Neely said.

Robin Hart/robin.hart@amnews.com Noah Carroll gets a scoop of dried soy protein to add to the meals that DCA students were packing on Giving Tuesday.

Robin Hart/robin.hart@amnews.com From left, Lori Brunner watches Anna Kerri Cundiff as she carefully pours dried pasta into a funnel as Laikyn Francis gets another cup of pasta ready to pour.
You Might Like

One arrested after ‘pretty massive bust’

Boyle sheriff’s deputies were already having a busy week by the time Monday rolled around. Sunday afternoon, a large drug... read more