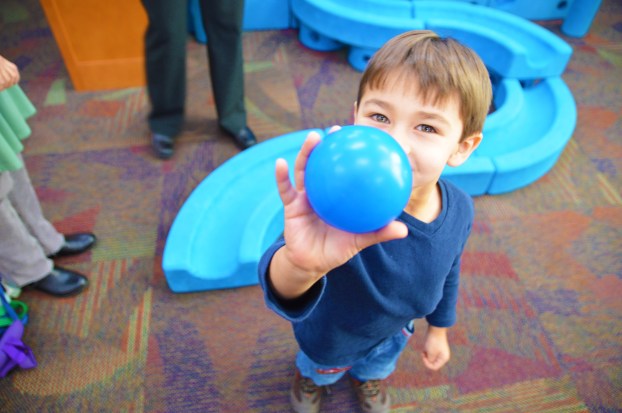 The Boyle County Public Library had an incredibly busy fall season. Since the traveling Science in Play2Go exhibit set up in the Children’s Library three months ago, it will have seen more than 10,000 visitors by closing time on Sunday.

Wednesday, the CEO and education specialists from the Kentucky Science Center (KSC) were on-hand to celebrate its success with Brooken Smith, chief of staff with the Education on Workforce Development Cabinet. The exhibit was created by using elements from the Science in Play exhibit at the KSC in Louisville. It was transported and adapted to libraries across the state.

Jo Haas, CEO of the center, said she knew the exhibit would be a success, not only with kids but entire families, and is thrilled with the participation across the state. The idea is to bring progressive early childhood learning to communities the center cannot reach as easily.

“It’s just been amazing,” she said, as kids from Little Lighthouse Learning Center ran around the foam fort area at her feet. The exhibit plays a critical role in addressing kindergarten readiness across the state, Haas said, by offering its youngest citizens opportunities to strengthen 21st century skills.

“It uses open-ended collaboration and creativity, but through the power of play,” Haas said. 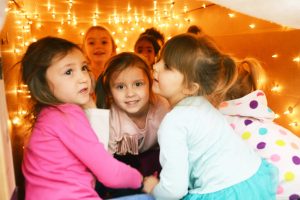 Photos by Bobbie Curd/bobbie.curd@amnews.com
Little Lighthouse Learning Center students Kinley Smith, from left in front, Olivia Comfort and Olivia Cross have fun together in a simple cardboard box strung with lights, as Eleanor Cummings and Genesis Sam pop up behind them. The students were taking in the celebration Wednesday at the library for the traveling science exhibit.

The library’s director, Georgia de Araujo, said by the end of the week, 41 school groups will have attended through field trips.

“We’ve had 48 community volunteers give their time in helping with all this activity,” de Araujo said. Youth services librarians Libby McWhorter and Kinsey Hisle tailored their ongoing storytimes and special events toward STEM activities and have had a great response.

Mary Beth Touchstone, an education specialist with KSC, has been updating the activities within the exhibit every few weeks.

“It isn’t just kids who love this, it is also the parents. The staff has found that parents seem to be especially engaged with their kids in this kind of play,” de Araujo said. “Whether it is the freedom to experiment or the fact that the experimenting allows them to problem-solve, it also is a lot of fun.”

Smith said about 90 percent of a child’s brain development is completed by the age of 5, and related this stat to the importance of hand-on and interactive play for life-long development.

de Araujo said, “Helping parents and caregivers make the most of that interactive play is a valuable part of what the exhibit offers.”

Touchstone said her job was made easier due to the commitment of library staff. She said when the exhibit first came to Boyle, there was a brainstorming session to devise supplemental science programming; offers made to underwrite transportation costs; and special scheduling created to offer after-hours events.

“We relied very heavily on library board members, the Friends of the Library and generous members of the community who were willing to invest their time … to make this available to all, free of charge,” Touchstone said. “With their help, we were able to broaden the scope of the exhibit and talk about artist Stephen Powell and his glasswork, the role of constellations before the invention of iPhones, clocks or even calendars, and paper made from cow poo — a big hit with the under 10 crowd.”

Last week, the library celebrated its 10,000th visitor to SIP2GO — Leo Price, of Danville, who came to the celebration. And Josh Rockey, who comes with his mom, Mary, every day from Pulaski County was the 100,000th visitor during the SIP2GO’s two years travelling to eight libraries in the state. Mary Rockey drives in every day to take her other child to Danville Montessori School, and she and Josh go straight to the exhibit after the school drop-off, she said.

“It’s been amazing to have this here,” Mary Rockey said. It is especially meaningful to her as a field scientist, she said, to watch her child not only partake in science-related projects, but to enjoy them.

“I think these numbers tell the story,” Touchstone said. “Ours is a community committed to education … It takes a village to bring a science exhibit to Boyle County, and I am so grateful for the investment of time and energy made by our village.”

Photos by Bobbie Curd/bobbie.curd@amnews.com Jo Haas, CEO of the Kentucky Science Center, takes in Brooken Smith’s words during a celebration at the library Wednesday. Smith, chief of staff for the Education on Workforce Development Cabinet, spoke highly of the sucess of the Science in Play2Go traveling exhibit, headed up by Haas.

Photos by Bobbie Curd/bobbie.curd@amnews.com Josh Rockey, from left, and Leo Price were spotlighted by Jo Haas, CEO of Kentucky Science Center, Wednesday during a celebration for SIP2GO at the Boyle County Public Library. Josh was the very first visitor to the traveling exhibit at the library, and the 100,000th visitor to the program spanning across eight libraries in the Commonwealth. Leo was the 10,000th vistor to the local exhibit.

HARRODSBURG — Although the Harrodsburg Historical Society’s big fundraiser is almost 30 years old, one of the organizers says there’s... read more