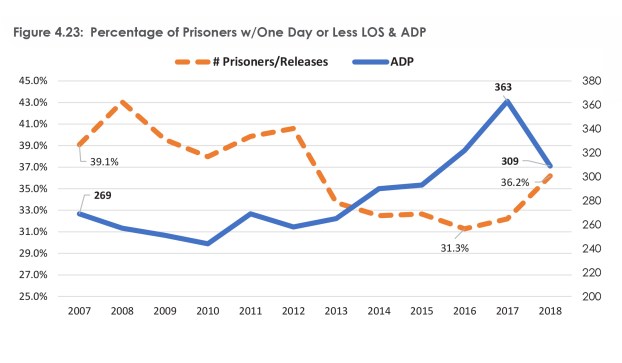 When the public is presented with the findings of a 350-plus-page study of the Boyle County Detention Center and the local criminal justice system tonight, they will hear consultants recommend construction of a new jail. But what are the data that led the consultants to make this recommendation?

According to analysis of more than 79,000 jail records from 2003 to 2018, the jail shared by Boyle and Mercer counties has been overcrowded for more than a decade. As a result, it’s impossible to provide constitutionally appropriate levels of care, leaving the jail and the counties potentially liable if a lawsuit were filed, according to chapter four of the study.

The jail’s current capacity of 220 beds is “substantially and dangerously inadequate,” according to the study, which was compiled by Brandstetter Carroll for the Boyle Mercer Joint Jail Committee at a cost of $75,000.

To begin, the 220-bed capacity does not mean the jail can adequately handle a daily population of 220 inmates: “A facility’s functional capacity is 80 percent of its total capacity and is considered the maximum number of prisoners that should be held to ensure operational (effectiveness) and staff and prisoner safety and security,” the study states. “… Overflow capacity is the 20-percent margin of beds between functional and total capacities that (is) needed to ensure that there are enough jail beds to continually move and house prisoners according to their various risks and needs … and for very short-term spikes in the daily prisoner population” from things such as mass-arrest drug busts.

To make things worse, the average daily populations are lower than “peak” populations — moments when the jail peaks at much higher numbers of inmates.

(Notably, in recent weeks, the jail’s population has plummeted, dropping below the total capacity of 220 multiple times. On Wednesday afternoon, the population was 225.)

As a result of all this, “many to most prisoners are not provided adequate housing,” according to the study. “… The number of prisoners not accommodated by (the jail’s) functional capacity on peak days ranged from 38 to 226.”

Why are the inmates there?

The analysis of jail records found that while the jail’s population has been increasing, the number of bookings — people put into the jail — has actually been going down. That’s only possible because the inmates who are put in the jail are staying for longer periods of time.

“These findings are extraordinary and clearly demonstrate the primary cause for overcrowding,” the study states.

The consultants compared the local jail’s release rates to those of another jurisdiction — one with a population of more than 100,000 (larger than Boyle and Mercer counties), but with fewer annual bookings and a lower average jail population.

“The compared jurisdiction operates a wide array of jail alternatives and diversion programs that have impacted inmate lengths of stay,” the study states. “Additionally, the judiciary in this jurisdiction actively (participates) on their (criminal justice coordinating council) and assertively participates in (ensuring) the effectiveness of their jail alternatives and diversion programs.”

Chapter seven of the study builds off of the data presented in chapter four in an attempt to guesstimate how many beds Boyle and Mercer counties would need by 2048 in order to provide constitutionally appropriate care.

The consultants used three different models to estimate the number of beds needed without changes to the criminal justice system at 770, 756 or 725.

But, the consultants warned, “there are solid arguments suggesting that long-term jail bed forecasting is inherently unpredictable and often incorrect.”

“All models are based on known jail population indicators and therefore, assume no change in local criminal justice system practices (determined) by this study to have substantially contributed to jail population bloating and unnecessarily high rates of jail overcrowding,” the study reads. “We reason that jail bed capacity needs could decrease (by) 10 percent to 15 percent via good faith (efforts) and (intentional) expansion of and implementation of evidence-based criminal justice, pretrial services, jail alternatives and diversion.

“We reason that jail construction of approximately 480-500 beds would meet Boyle and Mercer counties’ needs through 2048 with such improvements to local criminal justice system policies and practices.”

There are other options presented in the study as well, including building a treatment facility that would focus on rehabilitation; and partnering with adjacent counties such as Garrard and Lincoln counties to build a regional facility. The consultants have recommended local officials ask neighboring counties if they are interested in a partnership as they attempt to nail down what to do next.

A public forum for the presentation of the Boyle-Mercer Jail Study completed by Brandstetter Carroll consultants will be held in the InterCounty Energy community room, 1009 Hustonville Road in Danville, at 5:30 p.m. today, Nov. 29.

The Boyle County Public Library had an incredibly busy fall season. Since the traveling Science in Play2Go exhibit set up... read more