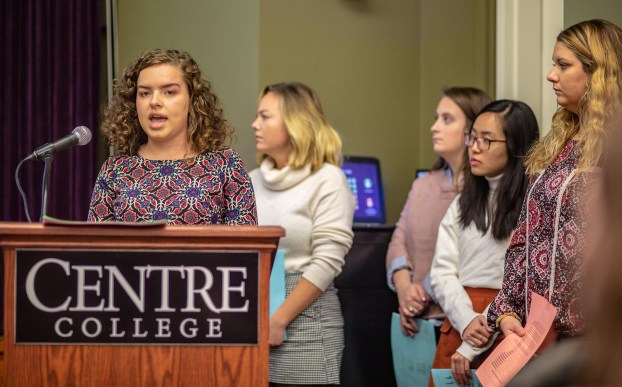 The importance of family support for people trying to overcome addiction may not be fully recognized by culture or current drug treatment practices, according to Centre College students who have been researching addiction in Boyle County this semester.

The students emphasized the idea of treating addiction as “a family disease” rather than an individual disease during a presentation of their research in Vahlkamp Theater Wednesday morning.

Centre student Keeley Morton said the effects drug addiction can have on families — and the effects families can have on recovery — became apparent as the students interviewed community members and conducted a survey of 81 people in various stages of addiction, rehabilitation and recovery. 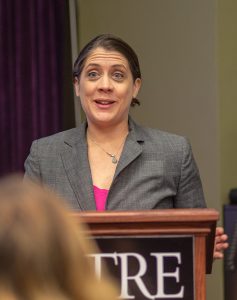 Ben Kleppinger/ben.kleppinger@amnews.com
Professor Kaelyn Wiles led a team of 14 students in her sociology 305 class as they researched addiction in the Boyle County community this semester.

More grandparents are raising their grandchildren because of parents’ addictions. And it can be complicated to know how to help a family member without enabling their addiction, Morton said — “families have to reorganize themselves.”

“One interviewee said it goes beyond understanding addiction as an individual disease, but as a family disease,” she said. “There is a need for more support programs and tools for families specifically because of their important role in facilitating the recovery process.”

The students’ research found many study participants say family can be important and often isn’t a barrier to recovery once someone enters the recovery process. But almost half of people surveyed also said their family members did not actively try to find them help for their addiction problems.

Abby Tessitore said the class theorized based on the survey results that while many family members may want to be supportive, they may also not know how to help or where to turn. It’s also possible some family members feel it should be the responsibility of the addicted person to find help, Tessitore added.

Demi Kennedy said she has witnessed flaws in current rehabilitation systems personally, because she has a family member who has dealt with addiction. When she would take her family member to rehab centers, they would often be “very strict on relationships,” including requiring severe limitations on communication with family members.

The students acknowledged sometimes family members who are also addicted can hinder someone’s effort toward recovery. But the importance of good family support should not be ignored, Kennedy said.

“We found that relationships do aid in the recovery process, and it’s more beneficial to have people supporting you in the right ways than to have no one supporting you at all,” she said.

The 14 students in professor Kaelyn Wiles’ Research Methods course have been working on their project all semester. They observed at the Shepherd’s House intensive outpatient program and the substance abuse program in the Boyle County Detention Center; they interviewed stakeholders and people in recovery in the community; and they distributed their survey for people dealing with addiction issues to three area substance abuse support entities — Celebrate Recovery, Boyle County Alcoholics Anonymous and Selfrefind.

“These students have done an incredible amount of work this semester,” Wiles said. “This has been one of the most invested, eager to ask questions, challenging of current knowledge, group of students that I’ve ever had the pleasure of working with.”

Other findings the students highlighted include:

• A lack of understanding of barriers to recovery: Katherine Diaz Garcia said the community seems to understand the idea that “addiction doesn’t discriminate” — that it could happen to anyone. But too often, people infer that it also must be the case that “recovery can happen for anyone, too.”

That’s not necessarily the case, she said, explaining how the cost of rehabilitation can be thousands of dollars and many don’t have the money — in fact, about half of survey respondents said they make less than $25,000 annually.

There are also higher barriers to recovery for women because there are fewer rehabilitation options available. And “gay individuals are not welcomed” at some treatment facilities, limiting their access, as well, Diaz Garcia said.

• Addiction is not viewed as a medical problem: Sally Ann Finn said the students spotted inconsistencies in how people talked about substance abuse. While many acknowledged the importance of treating addiction, “it became apparent that there was also a hesitancy to treat the opioid epidemic with the same considerations that (we treat) all other types of diseases,” Finn said.

She pointed to the suggestions students heard from some that opioid-addicted individuals should only be given naloxone to revive them from an overdose three times, sometimes referred to as a “three strikes and you’re out” policy.

“This is very unlike any other disease. There would be no three-strikes-and-you’re-out rule for medications that are treating diseases like diabetes,” Finn said. “In order for the treatment of addiction to be more streamlined and consistent, there must be medicalization of both addiction and treatment.”

• People in recovery should be leaders: Salem Menze said people such as police officers, doctors and elected officials have often been the ones in charge of how the community deals with addiction.

“But in this particular case, the people in control didn’t really know what to do,” Menze said.

Menze said communication with people in recovery has improved and led to better programs and services. 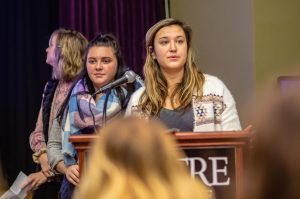 “We believe that even more respect and trust should be given to those working through the recovery process,” she said. “People in recovery are consistently and directly supporting the education of stakeholders through their own struggles. Making more explicit and official positions for people in recovery to serve as experts would seem to be a step in the right direction.”

• Education cannot be the only answer: Caroline Brotzge said many people the students talked to held up education as the best way to solve addiction problems long-term. Such an answer may be easy to agree with because it’s a “widely shared community value.” But people may also over-emphasize education “and almost use education as a distraction,” Brotzge warned.

“Education isn’t the only solution and can’t target the root causes of the opioid epidemic,” she said.

Kids who are exposed to drug use early in their lives won’t be affected the same as others by zero-tolerance, “just say no” campaigns, she offered as an example.

“If we are putting most of our hope on education, we are limiting the possibilities for a more holistic solution,” she said. “The community needs many different options that aid the recovery process.”

Brotzge said community members must figure out a way to walk a tightrope between the oversimplification of saying education is the magic bullet and making things so complicated that people give up hope.

Kathy Miles, coordinator for the Boyle County Agency for Substance Abuse Policy, said she was glad to hear the students bring up the education issue.

“There is no simple answer,” she said, noting that many people who receive drug-addiction education still wind up getting addicted — some through legal prescriptions they originally received from a doctor.

“It’s a long-term (issue); you’ve got to be in the trenches in the community for a long time,” Miles said. “Those simplistic answers don’t work and you all are so good for pointing that out.”

Professor Wiles said this is the second year her Research Methods class has teamed up with Boyle County ASAP for its research project.

“Who knows where we’re going to go from here,” she said. “Certainly, there’s more work to do in the future.”

The raw data collected by the students, including anonymized transcripts of all their interviews, will be provided to community leaders to further analyze and use in developing drug policy in the future.

Kennedy said the work required by Wiles’ class was worth it and she was glad to get off-campus and learn more about the local community. “We really enjoyed this research project and getting to shatter this Centre bubble we live in.”