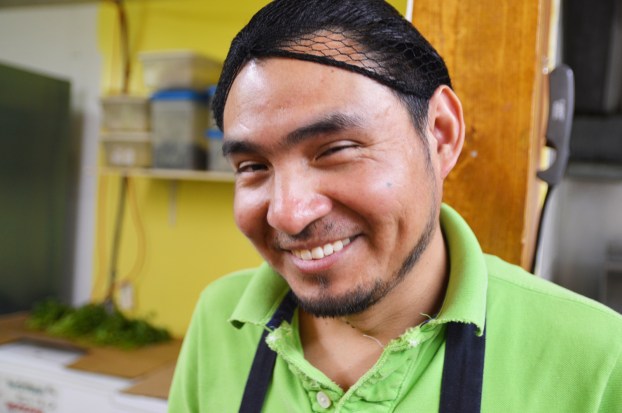 Photos by Bobbie Curd/bobbie.curd@amnews.com Israel Gonzalez has worked at La Hacienda for 14 years, since he first arrived in the U.S.

Even though Israel Gonzalez says not all of his food is totally authentic, it’s probably the closest you’ll get locally. He’s worked for La Hacienda Tienda Mexicana Y Taqueria for 14 years — as long as he’s been in the U.S.

“It’s not completely authentic, but it’s really close,” he says about La Hacienda’s fare. “People here (in the states) don’t always like the authentic.”

He’s putting together a to-go order on a weekday afternoon in the taqueria, situated in back of the Mexican grocery store. 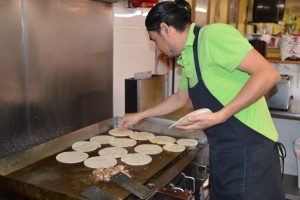 Fresh tortillas and meat is prepared on the grill for an order.

After slicing an avocado to include inside of a veggie burrito, filled with rice, refried beans, lettuce, tomato, cheese, onion, tomato and sour cream and then grilled, he puts a generous handful of fresh-cut cilantro on top of two carnitas tacos, with onions, radishes and lime, and a side of green sauce made from tomatillos and serrano pepper.

Aside from a buffet, served daily with fresh items like tamales, deep fried chile rellenos and maybe a fresh fish dish and beef choices, multiple items can be made to order. There’s dishes like pollo asada, shrimp fajitas, moharra frita (fried fish) and two of the more authentic items, Israel says — empanadas and sopas. The tortas — or sandwiches — are also popular, made with crusty Mexican bread spread with butter, served with avocado, beans, peppers, lettuce and any meat.

He learned to speak English after coming to Danville from Toluca, a good-sized city, located about 34 miles outside of Mexico City.

He took about two-months worth of English as a second language classes to learn the basics, but has picked most of the language up from everyday conversations.

“English is my second language, not perfectly, but trying to be able to have conversations. That’s been my life since I got here.”

He says the food isn’t Tex-Mex, which has more deep-fried (or “Americanized”) versions, but closer to what you’ll find in his home country. “It really depends on where you’re from (in Mexico). If you’re from a village, you may cook with different things” or whatever you have, he says.

He comes in daily around 10 to prep for lunch. Usually he’s busy chopping veggies, or cilantro and lime. Everything is made fresh; they chop and cut the meat up, season it and cook to order, whether it’s canitas (pork), lingua (tongue) or pork chops for the chuleta en salsa roja (cutlets in red sauce).

They get larger call-in orders, too — Israel has prepared taco orders for up to 400 before. But he doesn’t freak out when he gets a large order. “I’m just like, well — it’s fine. We’re just going to do it.” 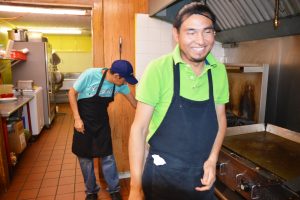 Many hispanic families shop at the grocery attached, mostly for tortillas or Mexican pops, like Jarritos in flavors like grapefruit, guava, mandarin or pineapple. Mexican Coke is also popular; the product made there is sweetened with natural cane sugar instead of the U.S. version, which uses high-fructose corn syrup. Some also put in orders for several pounds of seasoned meat around the holidays, and they carry huge cooking pots or granite mortar and pestle sets for meal or guacamole.

Israel moved here because his cousin previously worked at La Hacienda and told him he could get a job. “I said heck yeah, and came by myself. My cousin left, but I stayed.” He’s on a work visa, but would like to become a citizen one day — something he’s been working on.

“I hope so, one day. Have to start from the beginning,” Israel says. He’s thought about having his own place, he says, but actually prefers to work for someone else.

“There’s a lotta, lotta, lotta responsibility to do it. If you have your own place, you have to pay for employees, insurance, rent … It seems to be easy, but not that easy.”

Now his older brother, Joseph, works with him, which can be nice, he says. “It’s good working with my brother. Sometimes you get trouble, or get angry, but we’re family. You just let it go, and don’t mess it up with customers,” Israel says.

Other than making his own personal food pretty spicy at home, Israel doesn’t really have a favorite dish to cook. He really didn’t cook a lot growing up, but says he continues learning every day.

“I love cooking rice, but it gives me a hard time,” he says, chuckling. He says if you don’t mix it just right, it won’t give the right consistency. He pulls a vat of premade fried beans out of the fridge.

When asked if they use anything special in their beans, Israel laughs again. “Like my brother says, they’re ‘made with love.’ Yeah, that’s what he says. Love.”

Israel washes dishes in the back of La Hacienda..

Israel Gonzalez stayes on the move in the kitchen of La Hacienda Tienda Mexicana Y Taqueria in Danville. “I love talking to customers, but usually I don’t have the time to really stop and talk.”

Israel checks on some late lunch customers at La Hacienda.

La Hacienda is probably best known for its authentic tacos, Israel says. Here, he fixes a to-go box with a vegetable burrito and two carnitas (pork) tacos, topped with cilantro, radish and lime.

La Hacienda is probably best known for its authentic tacos, Israel says. Here, he fixes a to-go box with a vegetable burrito and two carnitas (pork) tacos, topped with cilantro, radish and lime.
You Might Like

A kid-friendly opera production is coming to Junction City Elementary School free of charge this week, thanks in part to... read more