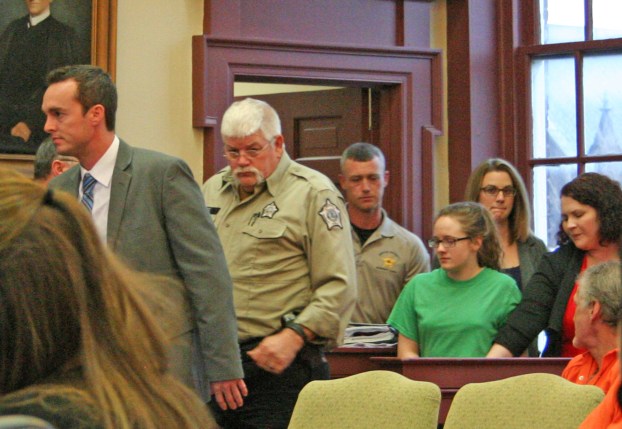 File photo Jenna Oakley, in green, appears in court in 2016 after being charged concerning the death of her stepmother.

Mediation is scheduled this month in the case of the Boyle County teen being tried as an adult for charges concerning the 2016 death of her stepmother.

Boyle County Circuit Court Judge Darren Peckler has ordered Oakley be transported from the Adair Youth Development Center where she is being held for a mediation scheduled for 1 p.m. on Dec. 12.

Many documents in Oakley’s case file are sealed, including a recent motion to suppress evidence. But one unsealed document is an email from Oakley’s attorney, public defender Jessica Buck, that explains some of the mediation planning:

“(Commonwealth’s Attorney) Richie (Bottoms) and I are going to attempt to mediate a settlement,” Buck wrote in the email about arranging Oakley’s transportation. “… Judge Peckler was in agreement to allow us to use the courtroom and adjacent rooms for the mediation and we have secured a mediator.”

On Sept. 1, 2016, Oakley’s 52-year-old stepmother, Rhonda Oakley, was found dead in the basement of her home on the edge of Junction City. Authorities launched a nationwide search for Jenna Oakley, who did not return to her home the night of the alleged murder.

Jenna Oakley and a 20-year-old male identified as her boyfriend, Kenneth Nigh, allegedly took Rhonda Oakley’s car and left the state; they were found in New Mexico three days later. Nigh later died in a hospital from self-inflicted injuries.

In October 2016, Bottoms said Nigh “played a role in the murder” but he couldn’t go into more detail than that.

A trial date was originally scheduled for September of this year, more than two years after Rhonda Oakley’s death, but the trial was continued in August. The case is currently scheduled for a jury trial on Jan. 28, 2019.

Bottoms said in October 2016 that Jenna Oakley was being tried as an adult because the alleged crime met at least the minimum of two qualifications under state law for an individual over the age of 14 to be tried as an adult. The seriousness of the crime and the fact it was against a person both made it possible to charge her as an adult, he said.

“The seriousness of the alleged offense? Murder. You can’t get any more serious than murder,” Bottoms said at the time.

Bottoms and Buck both said they could not comment on the mediation plans.

Dealing with addiction during the holidays

By ALETHEA PRICE Boyle County Extension Agent for Family and Consumer Sciences The holidays can be a stressful time as... read more