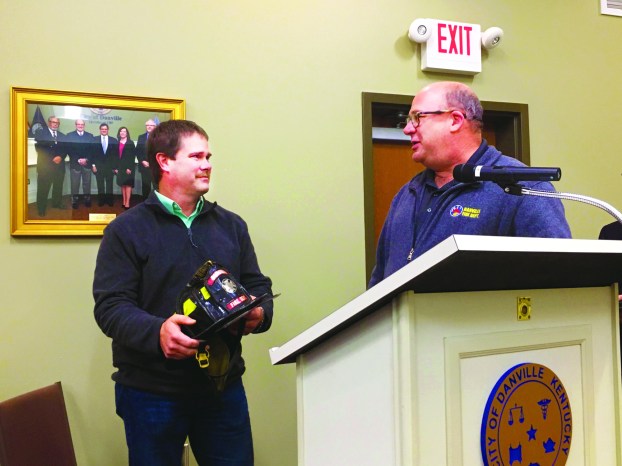 Bobbie Curd Lt. Scotty Caldwell accepts a fire helmet from Danville Fire Chief Ken Pflug, honoring his long career as a firefighter. Caldwell got emotional talking about how the fire house is like a family, not just a brotherhood. “Thank you for allowing me my opportunity to live out every little boy’s dream; to be a firefighter and to ride in the big red trucks.”

Two longtime public servants gave moving goodbyes to the city Monday night during the Danville City Commission meeting. Officer Robert Ladd was honored for retiring after a 20-year police career, with 14 of those years being served in Danville. Lt. Scotty Caldwell has fought fires for 26 years, 20 in Danville.

Chief Tony Gray said Officer Ladd came to the DPD from Harrodsburg in 2005. “It’s been a fun ride. We did all the roasting last week … so we’ll be professional,” Gray said.

Ladd became a detective after four years on the job as an officer. He was an accident reconstructionist, which his “very detail-oriented” type of personality served him well for, Gray said. He handled as well as assisted in a lot of “heavy cases during his time in investigations,” Gray said.

“As an investigator, he also launched a unit that apprehended internet predators that would prey upon the youth of our community,” Gray said — something for which Ladd didn’t receive a lot of recognition for due to the undercover nature of the work. The chief said the position is kept very low-profile “to capture as many predators as we could, and Det. Ladd was one of the first in his region to start investigating internet crimes. He did an excellent job of keeping them off the streets, helping keep our youth safe.”

Gray said he worked in conjunction with Det. Lisa Dollins. “Unfortunately, that requires you to be — well, his (social media) profiles, we’ll just leave that alone. Some of his profiles were …” 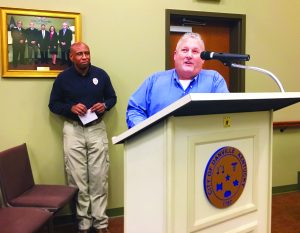 Bobbie Curd
Officer Robert Ladd said he could not have done the type of police investigations he has for the last 20 years without support from friends and famiy. Chief Tony Gray stands behind him. Ladd retired after 14 years with the Danville Police Department and was honored Monday night during its regular meeting.

“They were interesting. That’s a good word,” Gray said. After he knew his retirement plan, Ladd came back onto patrol in late 2016, something Gray said has been priceless for the department, especially with a smaller police staff and no third-shift supervisor.

“He’s been a great assistance to us on patrol when we’ve been short. We’ve got a very young and inexperienced department. He’s been a great leader … For me to go to bed at night, knowing we didn’t have a supervisor, but knowing Ladd was taking the watch was a great comfort,” Gray said. “I appreciate your sacrifices and support in my tenure as chief.”

As Ladd stood behind the podium, he received a long, standing ovation. Mayor Mike Perros presented him with a blue pocket knife with his badge number on it.

Ladd said a job in public service is next to impossible if you don’t have the support of family and friends. “Friends you gain by working here, and family is a huge support factor …” He said due to his close friends on the force, plus support of his family, he’s been able to “maintain a level-headedness and the ability to go through 20 years of an uphill, downhill kind of career.”

Danville Fire Chief Ken Pflug spoke about Lt. Caldwell, and how he’s watched him grow through his career.

“He’s a very quiet man, but with great wisdom. He’s my problem-solver. It’s always interesting to get his point of view — he’s always thinking about what’s going on,” Pflug said. “But once you asked his opinion, you’d get wisdom, and I really appreciate that.”

Pflug presented Caldwell with a fire helmet. “It’s a little bit beat up, but well serviced … I want you take that home, put it up, look at it and say, ‘Those were pretty good years, but it’s nice to be in retirement.’”

Caldwell was also presented with a plaque for his dedication over the years, and Perros gave him a red pocket knife with his badge number on behalf of the city.

“ … I’ve been looking forward to this day, been counting down the years, then it got down to shifts — now I’m down to 96 hours,” Caldwell said. He said his father was a volunteer firefighter in the county, which is how he got started.

Caldwell said he disagreed with the saying about firefighters being a brotherhood. “I want to say it’s not a brotherhood, it’s family.”

He said if you did the math, over the years, he’s spent more time with his coworkers than he has his wife and son.

“Some stuff, we don’t take it home to our families, we keep it in the firehouse. We can also rejoice together,” Caldwell said. “Not only is it our job, it’s our passion.”

He said a few years ago, he was shopping for the Christmas toy drive and a woman came up and reminded him that he taught her CPR years ago. She told Lt. Caldwell she had to use it on someone, and she was successful because he had taught her how to do it.

He talked of the relief he and other firefighters got to see in parents’ eyes when they helped them install children’s car seats; how it made him feel to know he’d helped kids at local schools understand the dangers of fire; and how it felt to know they were shaping young minds.

“Now I’m going to go spend time with family and make up for lost time,” Caldwell said, choking back tears. “Thank you for allowing me my opportunity to live out every little boy’s dream; to be a firefighter and to ride in the big red trucks.”

Caldwell then asked Ladd to come back up to the podium, and presented him with a sealed envelope, which Ladd said, “This is what gets me a little worried …” then quickly remembered what it was — a humorous photo taken of him up in the ladder truck, “from an interesting angle.”

“A few years ago, the fire department needed the police department’s help with our ladder truck. And Officer Ladd was the unlucky subject who had to go up in the ladder truck with us,” Caldwell said.

Ladd said he was the only one who would do it, but added he’s tremendously scared of heights. The photo was taken when he was on his hands and knees, looking over the edge.

“Even though he was a police officer, he still wanted to ride in the big red firetruck,” Caldwell said. He and Ladd explained it was during an investigation, and they needed an aerial view; Ladd said Caldwell was the only person who could get him to climb that high.

“Like you said, it’s every little boy’s dream,” Ladd said. “It’s true. Police and fire will always be brothers — one red and one blue — that’s the way it is.”