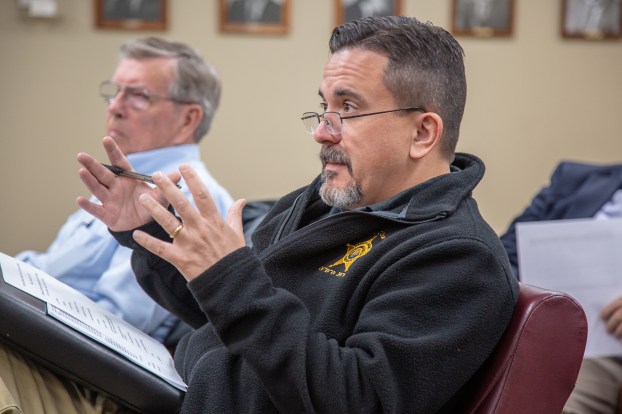 Ben Kleppinger/ben.kleppinger@amnews.com Boyle County Chief Deputy Jailer Brian Wofford explains the dangers faced by deputy jailers on the job and the difficulties of keeping good employees when the jail's pay rates are low.

Timing is wrong for raises at Boyle jail, officials say

Employees at the Boyle County Detention Center are overdue for a substantial raise — and there’s savings within the current budget that could cover the cost for the remainder of the year, according to jail employees and a Boyle County magistrate. But Boyle-Mercer Joint Jail Committee members said Friday they aren’t thrilled with the idea of instituting raises halfway through a fiscal year.

Magistrate Jack Hendricks championed the idea of an across-the-board, $1-an-hour raise at the jail during the Joint Jail Committee’s meeting Friday. The raise has been discussed by the Boyle County Fiscal Court since August, Hendricks said.

“I just feel very strongly that our people are our best assets and we’ve got to take care of our people,” Hendricks said. “… Of everybody that’s employed with us, they certainly deserve a raise. Whether it’s 50 cents or $1 — I’d love to see it be $1, but whatever we can do for them I think we need to do.”

Hendricks pointed out the jail has been understaffed by at least two positions for more than a year — something that may be due to low pay at the jail. The savings from not having those positions filled means “there’s money in the budget right now to take care of this particular year,” he said.

Hendricks shared financial data compiled by Boyle County Treasurer and Deputy Judge-Executive Mary Conley, showing the total cost of a $1 raise at about $121,000. He also shared comparison charts showing what employees make working at the jail, for the Boyle County Sheriff’s Office and for Boyle County EMS.

“We’re just not paying them enough to be able to fill the positions,” Hendricks said, noting the county recently hired a dog catcher that makes more money.

Chief Deputy Jailer and Jailer-elect Brian Wofford said he’s seen the drain low salaries can have first-hand. The jail has to hire people who clear criminal record checks and then they must get 80 hours of training. After going through all of that, it’s often the case that three or four months down the road, “another business contacts them paying more” and they leave, he said.

Wofford, who is a military veteran and former law enforcement officer, said it takes “a special person” to work in a jail, where the majority of people you deal with have drug-abuse and mental health issues and it’s not uncommon for them to try to hurt you.

“I have over 20 years of law enforcement (experience). I’ve done everything but ride a horse and work a dog,” Wofford said. “Let me tell you something — this is the hardest job in this profession. It’s dangerous; they’re exposed to communicable diseases; there’s people that come in and want to hurt them. We just had an employee hurt Wednesday … it’s a dangerous job. They deserve more money.”

Jailer Barry Harmon said more than a year ago, the jail staff was given a $1 raise, and the intention at the time was to continue giving more $1 raises in the future until starting pay for a deputy jailer was around $14 or $15 an hour. But those subsequent raises never materialized. 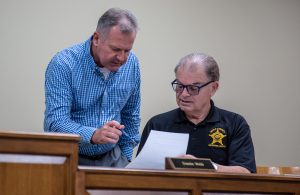 Harmon said working in a jail is “the deadliest job in America.” But “I can go to work at Donnelly (now LSC Communications, a local factory) today and I can start out at $13.50 to $15 an hour. That’s where most working class people will go.”

“… To get the quality of people, we have got to pay more … We’ve got to step up to the plate and take care of the people that are taking care of us,” Harmon continued. “If we don’t, there’s going to be a breakdown.”

Mercer County Judge-Executive Milward Dedman said he supports the idea of giving jail staff a raise but “my only concern is the timing of this.”

“It’s un-budgeted. We’re voting to do something that is not in Mercer County’s budget or in Boyle County’s budget,” Dedman said. “To me, these are the talks we need to be having in March and April when we’re putting the budget together. I agree that I think there need to be some pay increases.”

Wofford pointed out the fact that under-staffing to this point means there should be savings in the budget to “cover some of that.”

Mercer County Attorney Ted Dean responded that those savings wouldn’t be there in the next fiscal year.

“We do not typically go in an amend budgets mid-stream,” Dean said. “… We’re halfway through this fiscal year. I think that there’s an acknowledgement that there is a need for an increase, but this is something we need to hash out (at budget time). … I promise I’m going to look hard to find that money; I’m going to ask my fiscal court to find that money. And I think that we’ve got some probably, hopefully with some savings because of our lower population. But I  just don’t think now is the appropriate time on our end.”

Boyle County Attorney Lynne Dean said she is also “concerned” about giving a raise that doesn’t coincide with budget planning for a full fiscal year. But, she noted, she is concerned about the low pay and the fact that there are a lot of changes on the horizon for the jail. The recently completed jail study has recommended an entirely new jail be built, among many other recommendations. And many newly elected officials will begin their terms in Boyle County in 2019 — they’ll need some time to get “up-to-speed,” she said.

Harmon offered an apology to jail employees that they hadn’t already received raises as officials had planned for previously. He blamed himself for not pushing for the raises earlier, when other officials may have been willing to consider them.

“I apologize to my people,” he said.

The five-member Boyle-Mercer Joint Jail Committee is made up of the judge-executives and county attorneys from Boyle and Mercer counties and the Boyle County jailer. Boyle County Judge-Executive Harold McKinney did not attend Friday’s meeting.

It’s usually children writing letters to Santa, but back in December 1899, it was the other way around. The Kentucky... read more