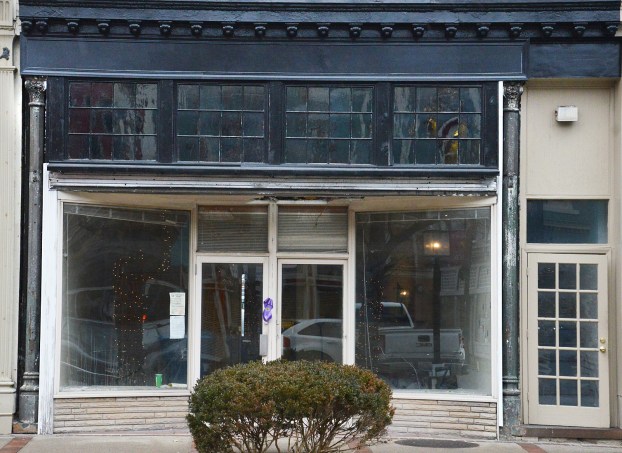 Photo by Robin Hart/robin.hart@amnews.com The building at 311 West Main Street is being renovated into apartments by owner Tim Montgomery. On Monday, he told the Architectural Heritage Board the original iron posts on either side of the building have been uncovered and he was requesting permission to set the window facade back about 18 inches.

The historic building at 311 W. Main St., which was at one time in danger of being demolished, is in the process of being restored, including having two of its original exterior iron posts uncovered and prominently displayed.

On Wednesday, the Architectural Heritage Board approved owner Tim Montgomery’s request to move the ground floor facade back about 18 inches, in order to properly expose the existing iron posts.

Montgomery told the board the posts would become the focal point of the building.

Allowing Montgomery to recess the front facade “will bring it back to what the streetscape probably would have been around the early 1900s,” House said.

In the report, House recommended the AHB approve Montgomery’s plan. She wrote that Montgomery is preserving and incorporating the remaining elements of the original historic storefront.

“The design is contemporary but takes on the historical flavor of the commercial entry,” she wrote. “It does not draw attention away from the building’s historic attributes and enhances the remaining historical material.”

In less than two minutes, the AHB approved Montgomery’s request.

According to the AHB staff report, 311 West Main St. is a three-story, brick commercial building constructed in the Italianate style. “This structure contributes to the Commercial (National Register) District by virtue of its style and material and its contribution to the business and commercial history of Danville in the late 19th century.”

The top of an original, ornate iron post can be seen at the building located in downtown Danville at 311 West Main Street. File photo by Robin Hart

Photo by Robin Hart/robin.hart@amnews.com The building located at 311 West Main St. in downtown Danville was once in danger of being demolished. Now, however, owner Tim Montgomery is renovating the structure for apartments. On Monday he was given permission by the Architectural Heritage Board to set back the facade about 18 inches in order to showcase the iron posts on each side of the building.

Two iron posts, original to the building at 311 West Main Street have been uncovered. It took the Architectural Heritage Board only two minutes to discuss and grant permission for the owner, Tim Montgomery, to recess the facade back about 18 inches in order to more prominitely display the posts.

The Boyle County Board of Education approved its 2019-20 school calendar Thursday night. The first day of school will be... read more