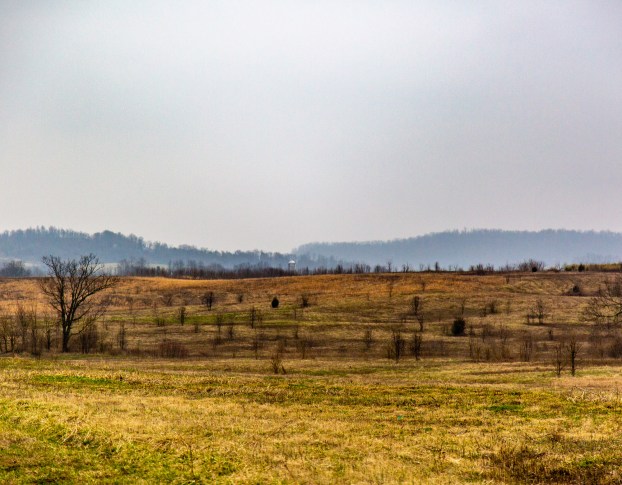 A 100-acre tract of land in the Boyle County industrial park was a possible site for a distillery project from Diageo in 2018. But the company ultimately chose a site in Lebanon, in neighboring Marion County. (Photo by Ben Kleppinger)

Danville was finalist for Diageo distillery project before it chose Lebanon

Back in October, the Danville-Boyle County Economic Development Partnership board closed the doors for an executive session in order to discuss two prospective businesses that had lost interest in coming to the county.

What had Boyle County lost? One of the two projects was a $130 million distillery project from Diageo LLC, one of the world’s biggest spirits companies.

Diageo went instead to the City of Lebanon in neighboring Marion County. The company announced in December it would be making a $130 million investment over three years and eventually employing 30 people full-time.

The Advocate-Messenger learned that Diageo had been interested in Boyle County through an anonymous tip. It confirmed the tip through conversations with Danville Utilities Engineer Earl Coffey, EDP President Jody Lassiter and Boyle County Industrial Foundation Chair John Albright.

Lassiter and Albright further confirmed that Diageo had been looking at a 100-acre site off of Corporate Drive in the Boyle County industrial park, just north of the Boyle County Cooperative Extension Office. The Diageo project had been known as “Project Workhorse” internally by the EDP and was listed as project “18-047” on the EDP’s quarterly “project funnel report,” Lassiter confirmed.

The project funnel report from October, when the EDP board met in closed session, listed a reason that project 18-047 had been lost:

“Danville site a finalist for project; BCIF (Boyle County Industrial Foundation) board withdrew site from consideration prior to return company/consultant visit due to number of jobs (25) to be created vs. acreage required (approx. 100 ac).”

In the most recent project funnel report, that explanation had been removed, replaced with a shorter one: “site withdrawn from consideration by owner.”

Lassiter and Albright confirmed the EDP board discussed the project’s situation during the October closed session. Lassiter said the board also discussed an alternative site proposed after the Industrial Foundation withdrew its land from consideration, but that land did not meet Diageo’s requirements because the “infrastructure was insufficient.”

Lassiter and Albright said “job density” was a factor being considered by the industrial foundation board in whether it wanted to sell the 100 acres. With less than 250 acres of available land left in the industrial park, the project would have consumed around half of the remaining space and occupied “highly desirable” land, Lassiter said.

Albright said there’s “plenty of land in Boyle County,” but not a lot of it that’s ready for industrial development, which needs strong infrastructure supports.

“We always look at … if there’s not enough jobs per acre, so to speak,” Albright said of the industrial foundation board’s process of evaluating prospective businesses. “… It’s difficult when we lose the opportunity for someone else to come in” with more jobs on fewer acres.

Albright said the 100 acres also wasn’t ideal for Diageo, which was interested in having even more space.

Lebanon City Manager John Thomas said Diageo is planning to use about 134 acres of land in Marion County.

“What they told us was they started a search throughout Kentucky with 261 sites and kept gleaning through and when they got to us, this was the match they were looking for as far as infrastructure and location and so forth,” Thomas said.

“Given the availability of future land, we have to make wise decisions about how we utilize it for job creation” Lassiter said. “… That’s what the industrial foundation has been doing since 1961 and I would say their record is pretty good in that regard.”

Albright said the industrial foundation also considers the scarcity of industrial land and the diversity of Boyle County’s industrial sector when making decisions about prospective businesses.

“There’s no hard and fast rules,” he said. “We take every case on its own merits.”

The industrial foundation wants to maintain a relatively diverse industrial base so that if a particular industry goes downhill and many businesses scale back or close, Boyle County isn’t hit with multiple layoffs or closures all at once, he said.

Boyle County has one bourbon distillery already in operation — Wilderness Trail Distillery — and another distillery project, IJW Whiskey, is constructing rickhouses for storing bourbon barrels. Both projects are located on land sold by the industrial foundation.

The IJW project was anticipated in December 2017 to initially create five to 10 jobs. IJW has optioned as much as 142 acres of industrial foundation land, of which it currently owns 32 acres; and it has recently purchased an additional approximately 13 acres from the industrial foundation.

Asked about job density for the IJW project, Lassiter and Albright said it wasn’t a factor because IJW is building on farm land that was originally expected to serve as a “buffer” between the industrial park and its neighbors.

“We never envisioned that that 140 acres would be industrially utilized,” Lassiter said.

“To learn of what you’re telling me is not only disappointing, but it is, to me, inconsiderate,” said Danville Mayor Mike Perros, when told about the Diageo project by The Advocate-Messenger.

Perros is a member of the EDP board, but minutes show he was not in attendance for the October closed session.

“The EDP is supposed to be a partnership. So why is one of the partners making a decision that affects all of us without sharing the full story? I also see that as somewhat disrespectful,” Perros said. “This scenario is the fundamental flaw in our recruitment efforts. For decades, a private organization has made decisions that have affected the taxpayer. It begs the question: What else over the last several decades has been turned down?”

Albright said the industrial foundation board considers various factors, including job density and diversity, on every single project.

“I know for a fact they’ve not taken everybody that comes in” over the years, he said, quoting the late John Hill Bailey, for whom the industrial park is named, who said, “We’re picky on who we pick.”

“I think that’s proven to be a good thing,” Albright said.

Perros was critical of the idea that the industrial foundation looks for projects with higher job density.

“I struggle as mayor trying to provide services and deal with the rising costs of those services in the face of stagnant revenues. This is going to come home to roost on the city and the county due to the state’s pension problem. If we don’t change the way we do things, the taxpayer is going to be left with some very unpleasant surprises, and I’ve been saying that for four years now.”

Thomas, the city manager in Lebanon, said Diageo is expected to break ground in May, and the facility will be operational in early 2021, at which point it will be “pretty close” to employing 30 people in “pretty high-end jobs,” making an estimated $60,000 to $90,000 annually.

“It would be a get for anybody,” Thomas said, noting it’s probably the biggest project to come to Lebanon since TG Kentucky, a supplier for Toyota, arrived around the year 2000.

Perros questioned “whose interests are really being served” if a private organization is deciding whether it wants businesses to come to the area. And he balked at the idea the land could eventually attract other businesses with more jobs.

“We’ve all heard the saying a bird in the hand is worth two in the bush,” he said. “I’d much rather get jobs in here and revenue from warehouses and liquor taxation and worry about future land acquisition later. Because costs (for the) city and county government is now, not later. We need jobs now, not later.”

Boyle County Judge-Executive Howard Hunt took office in January, so was not in office when the Diageo deal was in the works. He said he is “only just very lightly familiar” with the situation, but supports the idea of pursuing job-dense, diverse development in the industrial park.

“Everybody loves every (job) you can get in the county, but for 25 employees and for 100 acres of industrial park land, is that the … best investment?” he asked. “I wasn’t around when that decision was made by the industrial board, but I can see the logic.”

Hunt said he would even be OK putting more eggs in a single industrial basket if “we had more employees per acre” from the prospective business.

“We want to bring businesses, industrial manufacturing to the county,” he said. “Not just for the brick-and-mortar tax base, but we also want to bring it … to help county residents become employees.”

A Boyle County man has been sentenced to 27 years on federal drug charges related to the death of three... read more