Danville man has been running auto body shop for 42 years 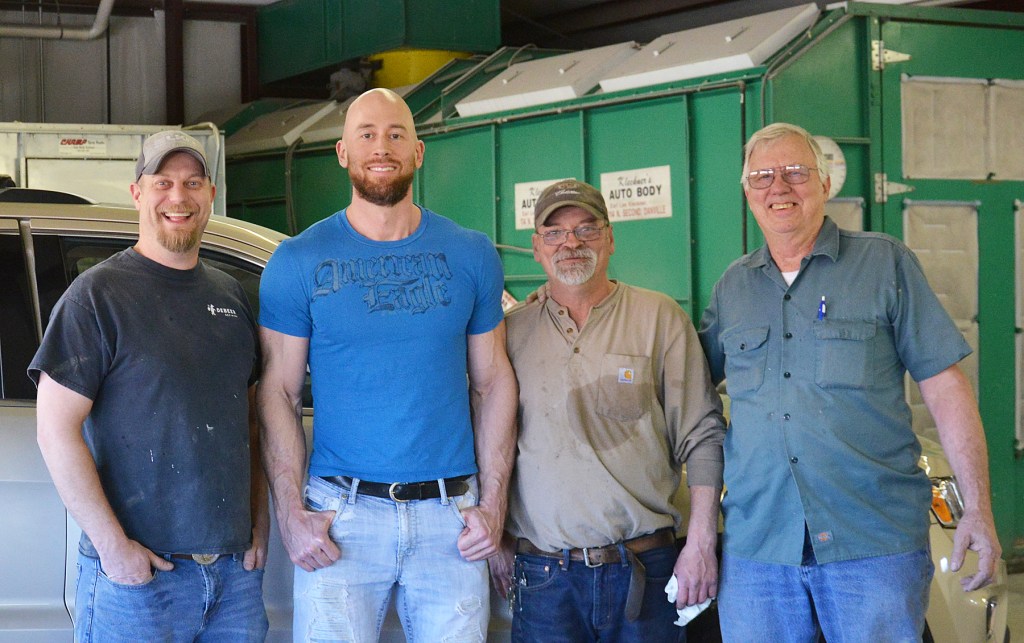 The guys at Kleckner’s Collision Center love cars and trucks.

“That’s what makes it more fun than work,” said Loren Arth as he was seam-sealing a Jeep’s back panel before painting it.

The Jeep had been struck by a dump truck, which crushed the back end, Arth said. They’ve been working on the vehicle for about two weeks and were ready to paint it so that it will look brand new.

Earl Kleckner started his body shop business 42 years ago in a small garage on North Second Street in downtown Danville. 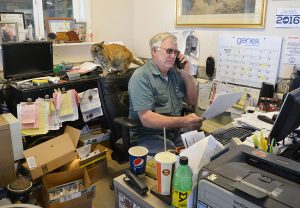 Surrounded by paperwork and car parts, Earl Kleckner talks on the phone about a repair job as his shop cat, Pumpkin watches.Photo by Robin Hart.

He built a much larger, safer and environmentally friendly garage about 14 years ago on Thoroughbred Drive off of Perryville Road and now has three professional technicians working with him to repair and paint damaged vehicles.

On Monday, a massive pickup truck used to haul cattle was nearly ready to be driven out the door after extensive repair work was done. Thanks to the the expert talents of Wayne VonLinger and Arth, the truck will be better than ever, Kleckner said.

The entire interior had to be removed along with the bed and all the doors so that repairs could be assessed and made.

As VonLinger was lying on the concrete floor attaching a running board, he said as he’s gotten older, he can still do the work, “it just takes a little longer.”

Kleckner was making a final alignment inspection and explained how the new bed had been placed on the truck. He was making sure everything was aligned perfectly and demonstrated just how gently the tailgate could shut without slamming it. “It’s a perfect fit,” he said proudly.

Kleckner said Arth is “an exemplary painter” and VonLinger is excellent with heavy mechanical work. They make a great team, Kleckner said.

Kleckner’s son, who’s also named Earl, is new to the business. He has a degree in communications, but he’s learning the body shop business, especially working with customers, suppliers, insurance adjusters and how to handle lots of paperwork, his father said.

Traditionally, late winter is a slow time around the shop, Kleckner said. “A lot of people like to wait until spring to repair damage from the winter.”

The two most common incidents which bring vehicles in for repairs is from backing into a car that’s not ordinarily parked in a person’s driveway, and hitting a deer. “They’re all over.”

Kleckner said he’s a “self-taught” body repairman and became intrigued with working on vehicles as his father tinkered with them when he was just 10.

When Kleckner was 12, he had saved up $25 from his newspaper route and purchased his first car — a 1947 Plymouth — without his parents’ knowledge. He said he and his brother hid the car in a field near their home in Ohio. “It was our little dirt tracker. We had it about a year before our parents found out about it.”

When they did learn about the car, “They weren’t real thrilled,” but were glad the boys knew better than to ever take it out on the roads, Kleckner said, laughing.

One day, Kleckner hopes to “semi-retire” and leave the business side of the body shop to his son and his expert team continue doing what they do best. For years, he hasn’t had time to fly his model airplanes and he wants to do a little fishing.

Loren Arth prepares a spray can of primer. Photo by Robin Hart.

Wayne VonLinger has worked with vehicles nearly all of his life. He’s been at Kleckner’s for about 15 years. Photo by Robin Hart.

Wayne VonLinger has worked with vehicles nearly all of his life. He’s been at Kleckner’s for about 15 years.

Earl Kleckner looks for alignment issues on a truck being repaired at his garage on Thoroughbred Drive. Photo by Robin Hart.

Loren Arth uses his fingers to spread on a seam sealant. “It’s messy. You get it all over you.” Photo by Robin Hart.

Earl Kleckner Jr. is learning the body shop business at Kleckner’s Auto Collision, a business started by his father 42 years ago. Photo by Robin Hart.

Loren Arth sprays primer on a vehicle before the final painting and blending of the colors of a vehilce that they have repaired.Photo by Robin Hart.