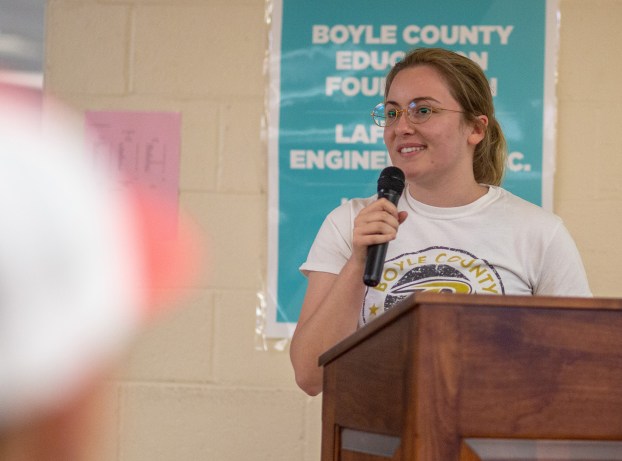 Boyle Schools asked the community about drug-testing students. Here’s what they said.

The Boyle County Board of Education will hold a first reading of a student drug-testing policy next week and could pass the policy next month, following a public forum on the issue Thursday night.

After a summary of how random drug-testing could work, 24 members of the public spoke for and against the idea during the hour-and-a-half-long forum. More than 80 attended.

A majority of those who spoke were in favor of the policy, while some asked the board to consider more effective and/or less invasive answers to teen drug use. 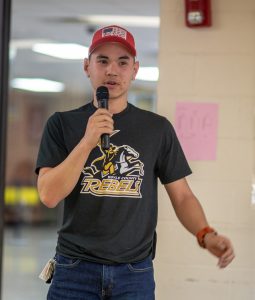 Ben Kleppinger/ben.kleppinger@amnews.com
Michael Mingey, a graduate of Boyle County High School, says there was a lot of drug use in his class when he was at high school.

Those in favor of the policy said they believe many if not most students in the middle and high schools use drugs — and many wouldn’t if they feared getting caught by a random drug test.

Phyllis Spurlin said based on conversations she has had with students, she believes as many as 85-90 percent may use drugs, including students from families of all income levels.

She blamed marijuana use among her son’s friends for causing him to use the drug, which she said led to his death when he was 18.

“I believe that if Daniel’s friends hadn’t been using, he wouldn’t have used either,” she said with tears in her eyes and her voice cracking. “… It is my hope that by implementing a drug-screening program in the Boyle County school system that tragedies like what happened to my son can be prevented.”

Lauren Burnett, assistant principal at Boyle County High School said as the wife of a recovering drug addict, she is in support of the policy.

“I can tell you without hesitation that many are abusing drugs in our schools,” she said, adding that students’ “brains are not fully formed” and they don’t think about the consequences of their actions.

She said people who claim the policy will not help everyone or that it’s not worth the costs are using “terrible logic.”

“If you would rather sit by and be bystander than ruffle some feathers because it’s the right thing to do for kids, then I dare say you are not a Boyle County Schools representative,” Burnett said. “Because the district I work for goes above and beyond all students and doesn’t make exceptions, especially out of cowardliness.”

Jonathan Clark said as a parent, a Boyle County alum and a local physician, he supports the proposal.

“I am definitely for this,” he said. “I think our school district has a lot more to gain from this than we could possibly lose.” 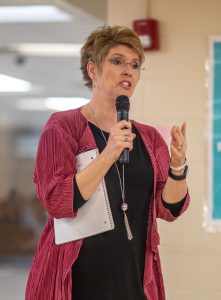 Ben Kleppinger/ben.kleppinger@amnews.com
Monica Sumner tells the school board studying the impact of drugs on the local criminal justice system has shown her the importance of addressing the problem and keeping kids from using illicit substances.

The board heard from at least three recovering drug addicts, including two who are Boyle County High School graduates, all of whom were in support of the policy.

Others who spoke in favor included Monica Sumner, a consultant with Brandstetter Carroll who helped develop the comprehensive jail and criminal justice system study that is guiding Boyle County’s efforts to reduce its jail population and possibly build a new jail.

Sumner said the study has shown just how much impact drugs are having on the criminal justice system.

A new jail could potentially cost $36 million — “that is a real number,” Cullen said. “… By not implementing a policy like this, you are telling your kids that drug use is not a big deal.”

Prior to public comments, District Counselor Pam Tamme, who is heading up the Random Drug Testing Committee that’s looking into the issue, laid out details of how the committee envisions the drug-testing policy working.

“We would consider this a supplement to things that are already going on in our district,” she said, explaining how students are already given “resiliency lessons” and a “Too Good For Drugs” curriculum is used at the middle school. The district also has numerous counselors and mental health professionals available to help students with issues, she added.

“The purpose of the proposed random student drug-testing program is to protect our students’ wellbeing,” Tamme said.

U.S. courts have found requirements that all public school students by drug-tested to be unconstitutional, but they have allowed school districts to require drug-testing for optional activities such as athletics, clubs and driving to school. 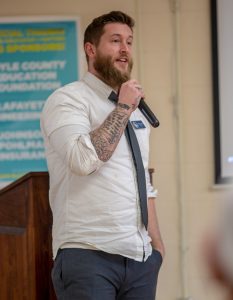 Ben Kleppinger/ben.kleppinger@amnews.com
Jordan Wilson, an employee of the drug recovery organization Isaiah House, tells the crowd he began using drugs in high school and “it landed me in a world of hurt and I lost everything.”

The committee’s proposal would subject about half of middle-school students and three-fourths of high-school students to monthly random drug tests. Students names and/or ID numbers would be be added to a pool if they drive themselves to school or participate in any voluntary extracurricular activities; a third-party drug-screening company would choose a certain number of those names/IDs each month, Tamme explained. Those students would be required to give a urine sample in the school nurse’s bathroom in order to continue participating in their voluntary activities.

Students who test positive for drug use would face three tiers of punishments:

Tamme said any student that quits their voluntary activities instead of accepting the punishment would be required to complete the punishment before participating again.

“Here’s what it’s not,” Tamme said. “The consequences or sanctions will not include suspension or any other sort of disciplinary action beyond the loss of some participation in those voluntary activities. There will not be any academic consequences or penalties and there would be no law enforcement action for failing a mandatory random student drug test.”

That claim was questioned by one of those who spoke against, Kevin Guthrie, who said schools are required to report illegal activity to law enforcement and child welfare issues to the Cabinet for Health and Family Services. Guthrie used his two minutes at the podium to rapid fire questions about the policy, including whether the district was accounting for “false positives” and if the cost of drug tests was being underestimated. He also wondered how safe students’ data would be in the hands of a third-party company and worried records of alleged drug use could “go everywhere” if a company mismanages them.

Vanita Fitzwater was the only Boyle County student to speak at the forum. She said alternatives such as using School Resource Officer Ricky Sellers and his K9 partner Petey to conduct more drug sweeps could be more effective.

“I believe that students should go through due process just like any other citizen in the Commonwealth of Kentucky,” Fitzwater said. “… the current policy forces students who are innocent to prove that they are innocent. And I don’t think it’s an efficient way of proving that students who do use drugs — I mean, it just doesn’t pinpoint those people.”

Jennifer Daniel, an advanced practice registered nurse who works in Danville, also wondered if there could be better ways to address teen drug use.

“My concern about this policy is, is this the best thing we can do?” she asked. “Is this the best, evidence-based program that we can provide for our children?”

Daniel pointed out the American Academy of Pediatrics has been against random drug-testing of students since 2015 “and they have some really good reasons.”

According to a 2015 statement from the AAP, negative effects of random drug-testing students “can include deterioration in the student-school relationship, confidentiality of students’ medical records, and mistakes in interpreting drug tests that can result in false-positive results.”

“The AAP recommends against the use of school-based drug testing programs because of limited evidence of efficacy and potential risks associated with this procedure,” the statement reads. “Pediatricians support the development of effective substance abuse services in schools, along with appropriate referral policies in place for adolescents struggling with substance abuse disorders.”

“I think we’re missing an opportunity. I think when we say, ‘If we save one life, is it worth it?’ Well, yes, of course,” Daniel said. “But if we’re doing this policy and we are ignoring the kids that are having problems that aren’t participating, and we’re missing the opportunity to be influential in their lives, I don’t think it’s worth it. I think we need to find a better way.” 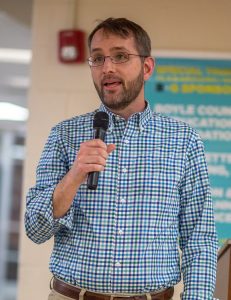 Ben Kleppinger/ben.kleppinger@amnews.com
Researcher John Perry says the school district should be looking for evidence-based, effective ways to tackle teen drug use, not pursuing a drug-testing policy “because it feels good.”

John Perry said he would like to see the school district pursue evidence-based strategies for helping students.

“It’s very difficult to get up and speak about this type of subject because it sets up a false dichotomy that if you’re against this then you clearly don’t care, or you have other, ulterior motives. And that’s not true at all,” said Perry, who said he is a professional researcher. “The way we should be thinking about this is we have a pot of money — your $10,000 or whatever. Our question should be how we should best use that. Is a random test that’s going to touch 300 people of 1,500 possible students, that are only participating in extracurricular activities — is that going to have a meaningful effect? Or is there another use of that money that’s going to have a powerful and meaningful effect?

“That’s the question we should be asking, not whether we should subject people to go pee in the nurse’s room.”

Superintendent Mike LaFavers said all the questions asked during Thursday night’s forum will be listened to again by school staff and answers will be posted on the district’s website, perhaps by the middle of next week. After hearing a first reading of the proposed drug-testing policy at its regular meeting — 7 p.m. Monday at Boyle County High School — the board could vote as soon as its next regular meeting — 7 p.m. April 7 at the high school — to approve, LaFavers said.