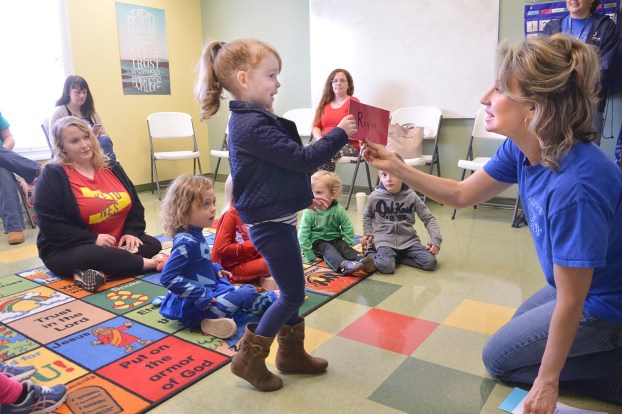 During circle time, Macy Royse hands teacher Mary Wells a card with her name written on it. Photo by Robin Hart.

More than half of the children in this area are not prepared to enter kindergarten, according to a “white paper” analysis recently released by the Danville-Boyle County Childhood Alliance. But Danville Schools’ Cradle School is one of the community’s efforts to change that.

The Cradle School is a free, early childhood education opportunity for parents and grandparents to monitor if their children are “on target for their age range,” learn how to take an active role in getting them ready for preschool and kindergarten and is even a support group for the adults. 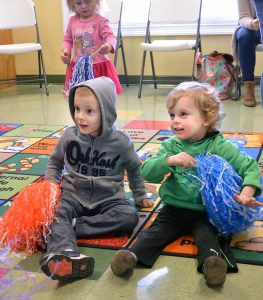 Wyatt TenEyck, left and Ellis Johns, get ready to shake the pompoms to the rythm of a song about an octopus. Photo by Robin Hart.

When a family enrolls through the FFRC, certified instructors of the Parents as Teachers (PAT) program assess each child’s hearing and vision. Then they measure the child’s milestones such as emotional, fine motor skills, gross motor skills and language.

“With these assessments, we have been able to capture children early who might be on the autistic spectrum, and those kinds of things,” Houston said.

“We’re all parents and we love our children and we keep them safe.” But parents don’t always recognize when their child might have a delay in language or social skills, Houston explained. “And if they do, they don’t necessarily know what to do to make it better. So that’s what this program is about.”

“There’s a young fellow now that we caught him really early and he’s doing really good in kindergarten right now. And it’s because we were able to catch what was going on with him and refer him out,” to other professionals who specialize in assessing and addressing learning issues, she said.

Not all the children enrolled in the program are behind in their developmental milestones though, Houston said. “If they’re good, if they’re above good, we recognize that. But if we recognize that they might be lacking a little bit or there’s a little bit of a delay, they will be referred out to somebody else so they can get further assessment,” so they will be ready for preschool and thrive in kindergarten.

Cradle School isn’t just for “at risk” families, Houston said. “We are across the socioeconomic spectrum. We have people in poverty who are struggling. And we have people who are doing perfectly fine financially.”

One of the mothers involved in the program even has her teaching degree, Houston said, but chose to stay home and “raise her babies. She’s an awesome mom in the program.”

Alleena Van Horn formerly taught arts and humanities and was assistant band director at Boyle County High School. She said she and her husband chose to home-school their two children several years ago. 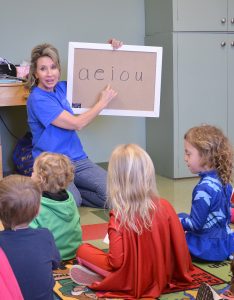 During a session at Cradle School on Friday, Mary Wells teaches the youngsters about the vowels and their sounds. Photo by Robin Hart.

Danville’s Cradle School “is an amazing precursor for home-schooling. It gave me confidence to know how to teach my kids,” Van Horn said.

But even if children will be attending public schools, the Cradle School is “a fabulous way to get the kids used to a school setting,” Van Horn said. The children get used to the school-type of setting with the comfort of having a parent nearby.

“It gives them confidence and trust” they will need when they enter school, she added.

Cradle School students and parents have classes together on Fridays at the First Baptist Church on the north Danville bypass from 10 a.m. to 12:30 p.m. Families also have scheduled monthly home visits with the instructors.

“When the babies come in through the doors at the church, it’s so funny because you have a baby that’s 18 or 20 months old and they hit that door and they’re running to go to that classroom. They know where they’re going and know what they’re going to do. If a puppet comes out, they know what song they’re going to sing,” Houston said. “It’s exciting to see these kids.”

In the mornings, parents and children gather for “circle time” where they sing, dance, say the alphabet, count and even learn some Spanish and American Sign Language.

“They do some fun stuff to get the wiggles all out,” Houston said. Then they go into classrooms by age — there’s an infant room, a toddler room and a preschool room, Houston said, where they will do age-appropriate activities.

The youngsters will practice fine motor skills like picking things up with their fingers, sorting, coloring and working wooden puzzles. They’ll also learn to use safety scissors. Houston said some 4-year-olds have never picked up scissors, which is a skill they’ll need to have in kindergarten.

In another large room, they’ll ride tricycles, play with hula hoops and practice their balancing skills in big red saucers. “They’re having fun. They don’t know that we’re developing all these skills,” Houston said.

The school also provides lunch to students and parents, but in separate spaces. “When we tell the moms that they get to have lunch without their kids, it’s like heaven! They get to enjoy a meal without holding a baby and chasing one down,” Houston said. 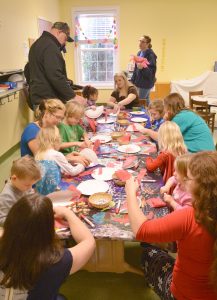 The group of 3-year-olds at Cradle School, with some of their parents work on an art project together. Photo by Robin Hart.

After lunch, the staff takes care of the children while the adults participate in a parenting group. “Maybe we’ll talk about speech or fire safety, or the importance of the dentist.”

Recently, one of the participating moms taught a mini Zumba class, Houston said. “You could actually see the stress levels decrease in these moms who were exercising and just having a good time.”

The parents are also “really good peer support for each other.” Sometimes if a grandparent is struggling with raising their grandchildren, another parent “kind of takes these people under their wings and helps them. … Grandparents raised their own kids 20 years ago, and now, here they are and times are very different,” Houston said.

Parents also make play dates throughout the week and bring hand-me-down clothing and food to the classes. “They do all kinds of things to help each other. That’s another good thing about the program, too,” Houston said.

During the week, parents practice what they learned at the school. “Sometimes we’ll offer suggestions to mom or dad or grandmom and say, ‘Now within the next week or two … I want you to work on this particular thing,'” Houston said. Home visits are friendly, supportive visits to help parents know what skills their child should practice.

For example, if a child has “sensory issues” about touching a substance like playdough, sand or even flour, the parents are given suggestions how to slowly introduce the item and have their child practice getting used to the sensation.

This week, Houston and staff member Mary Wells, who actually started the first Cradle School more than 15 years ago, attended a PAT training seminar to become certified instructors for children from age 3 to kindergarten age. This will enable Cradle School to embrace older children who don’t attend preschool, and help get them and their parents ready for kindergarten, Houston said.

Danville Schools Superintendent Dr. Tammy McDonald said, “Kindergarten readiness is vital to the success of a child’s education. Academic and social success of students throughout their K-12 experiences heavily depends on the early foundation students receive before kindergarten.” 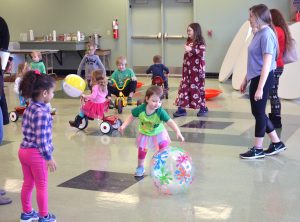 Houston is dedicated to the Cradle School program and sees first-hand how it helps children in Danville Schools. Most school districts have some type of early childhood program, but they’re not as intensive and long-reaching as Danville’s, she explained.

The Families First Resource Center’s budget can’t support the Cradle School, so Houston writes grants every year to keep it going, she said. Houston could easily hold a “community baby shower” or hand out pamphlets once a year, but that wouldn’t be nearly as influential to children and their families as the PAT program, she said.

Houston said, “When meeting with the families in the group connections or home visits, we can provide them with the materials and curriculum that is certified research-based for parents as teachers to give them additional resources and activities to help them with their children, because the program is exactly what it’s called — Parents as Teachers. We’re teaching these parents how to be their child’s teacher.”

Jase Daugherty wears a construction paper scuba mask during an activity where students were learning about the ocean and creatures that swim there.Photo by Robin Hart.

A group of 3-year-olds listen and dance as teacher Mary Wells, leads the fun. Photo by Robin Hart.

Jessica Simpson and her daughter Zoey, attend a class together on Friday at Danville’s Cradle School. Simpson said she likes that Zoey interacts with other children her age. “She loves coming here.”

Teacher Mary Wells talks to the group of 3-year-olds about the letters writtin on the card.Photo by Robin Hart.

Hobie Daugherty sits during circle time as his son, Jase, leans over. Photo by Robin Hart.

Three-year-old Jase Daugherty peeks over his dad, Hobie Daugherty’s shoulder as he tries on a paper scuba mask as his mom, Meghan watches.Photo by Robin Hart.

Rec league has its perks

By AARON HATTER Boyle County High School Kids throughout Boyle County have a competitive spirit and they love the opportunity... read more