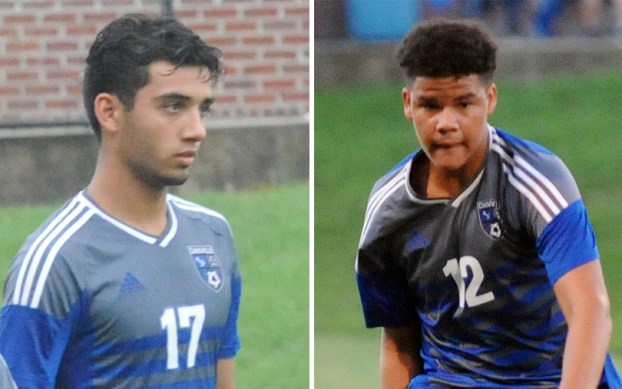 Nathan Hazlett, left, and Clark "Tres" Walker III, now both 18, will be tried as "youthful offenders" in the adult criminal justice system for allegedly throwing a rock through a deputy sheriff's windshield, causing him to wreck. Both teens have been involved in athletics at Danville High School. (Advocate file photos)

The two juveniles who were arrested in connection with a rock-throwing incident that caused a Boyle County Sheriff’s deputy to wreck in late January have been indicted as youthful offenders by a grand jury.

The cases against them will now proceed in Boyle County Circuit Court, instead of in the juvenile court system.

Nathan Hazlett and Clark “Tres” Walker III, now both 18, were indicted Wednesday on the following charges:

According to state law, juveniles charged with C and D felonies can be tried as “youthful offenders” in the adult criminal justice system if they are 18 when they appear before the court and the county attorney makes a motion to try them as youthful offenders.

In a motion to transfer both cases from juvenile court to Boyle Circuit Court filed by Boyle County Attorney Chris Herron on Feb. 5, Herron argued the defendants’ maturity, ages and pending additional charges involving a semi-truck were serious enough for the case to be transferred.

Bail for both men was set at $10,000. Kyle Lyons with the Boyle County Sheriff’s Office testified for the grand jury.

According to the original arrest citation, on Jan. 27, 2019, Hazlett and Walker admitted to throwing rocks at Deputy Dean’s vehicle as he was passing the opposite direction of the suspects’ 2002 Honda Accord on Ky. 34. The rocks smashed through Dean’s windshield and struck him in the face, which caused him to veer off the road, striking several trees. The vehicle rolled and flipped several times before hitting an outbuilding.

According to case files, Dean suffered serious injuries when he was knocked unconscious, received a concussion, a broken nose and deviated septum.

The juveniles didn’t stop after throwing the rock that caused the accident, according to the citation.

After an investigation with their parents present, Hazlett and Walker were taken into custody and detained at the Adair County Juvenile Detention Center. They were originally charged with first-degree assault of a police officer; leaving the scene of an accident with failure to render aid; and first-degree criminal mischief.

During their detention hearing on Jan. 29, both teens were released to their parents and ordered to not leave home without their parents’ permission and attend school, among other stipulations.

Hazlett and Walker were both active in Danville High School athletics. Hazlett was an All-Area Team member for football and soccer; Walker played for the school’s soccer, football and basketball teams.

Officials: No evidence to support rumors about Danville runaway

Officials say rumors that have been circulating regarding a Danville teen reported missing earlier this week are nothing more than... read more