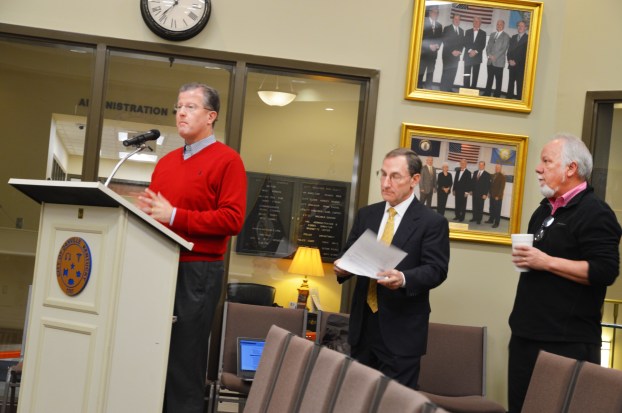 Editor’s note: This is the third story in a series focused on agency funding requests made to the City of Danville for fiscal year 2019-20.

During last week’s agency funding requests, the Danville-Boyle County Economic Development Partnership explained its rationale behind the dollar increase it’s asking for. Last year, the EDP was funded $72,500; this year, it’s asking for $150,000.

EDP board chair Ben Nelson told the city commission and staff he was there on behalf of the nine organizations in the partnership, “including the City of Danville, to ask that we invest boldly in the strategic plan you all helped us adopt.”

“We are not funding the plan. We are falling behind and we need to come up with the money to make the plan happen,” Nelson said. He said the EDP fell short on funding its strategic plan last year by nearly $200,000, and is asking for what it believes is the city’s “fair share” of the cost.

The board’s treasurer, Alan Turbyfill, said the plan calls for the EDP to employ 3.5 people; the EDP now has one full-time employee, President/CEO Jody Lassiter, and part-time administrative help through a shared employee with the Convention and Visitors Bureau. He said the need is to “staff up from there in order to do what we’ve been asked to accomplish.”

There is also an additional expense included for contract services — at $30,000 — which could be one person all year long, Turbyfill said, or two-three people for months at a time. This change was made to “plug some holes” in staffing needs, he said.

Asset development is also an area adding an increase into the EDP’s funding request; $100,000 total is budgeted for things like developing additional properties to be available and marketable for development, as well as some “pad-ready” site development, meaning all utilities/parking, etc. are completed for a site.

“This is an area where we haven’t kept up or even started with the strategic plan,” Turbyfill said. “ … We know it takes time and funding; we don’t want to wait another year to get started.”

Another large piece of the EDP budget is for workforce development, which has $42,200 budgeted.

“This is an area where there’s been a lot of discussion and coverage about our effort … a lot is going on,” Turbyfill said. He said the workforce development committee is “doing a great job coordinating and working with employers, the school system,” but funding was needed to help the committee complete several processes. Of the total amount budgeted, $25,000 would be spent on a Boyle County area wage-benefit study; $15,000 on a regional job fair; $1,200 on a resource guide/event; and $1,000 on a mentorship program.

Turbyfill said the key issue for area employers is “finding good people — do we have them? Are they trained and ready to do the work needed?”

Another area of significant increase in the EDP’s budget is marketing, budgeted at $88,250.

That includes $25,000 for development of Danville’s federally designated “opportunity zone,” Turbyfill said, which would be all new funding. He said this would be used to “get some things going on in downtown,” for general “projects we’ve been talking about for a while.”

He said a window is opening with opportunity zones, a “new tool” that might help those efforts. Opportunity zones are low-income, distressed districts where investors can receive significant federal tax breaks and deferrals for investing in development projects.

“We don’t know exactly how that money would be spent, but we feel like it’s important to get into the budget and funds designated for downtown development and potentially taking advantage of the opportunity zone,” Turbyfill said.

Boyle County applied for a large zone that would have included three Census tracts; it was approved for smaller zone of only one tract, which includes “from Lexington Road to Clark’s Run, to Maple Avenue and the railroad tracks, to Stanford (Road),” Turbyfill said. Locally, a workshop is offered 10 a.m.-noon Thursday (March 28) at Inter-County Energy’s community room to educate anyone in the community interested in learning more.

“Help me understand the area wage survey,” City Manager Ron Scott asked, in reference to the $25,000 budget item. He was under the impression that industries annually complete required salary information “that show how much a certain type of employee is paid, and that that information is available already. Is that not true?”

Lassiter said there may be surveys to that extent that “may be proprietary and not shared.” He said the EDP’s hope is to conduct a survey that “more fairly un-skews and states exactly what entry level plus mature levels of wages would be in certain areas.”

Lassiter said a regional or four-county survey would more correctly represent this area’s workforce, rather than being included in the Bluegrass region, which includes Lexington and Georgetown.

“That’s something that should be done … on a regular basis, every two to three years,” Lassiter said.

Mayor Mike Perros asked Lassiter and Nelson if they can reach out to Shepherd’s House drug treatment center, as well as get them in touch with the Industrial Council of Managers, for two reasons. During its funding requests, Program Director Roger Fox said housing is always an issue, as well as finding employment opportunities for former addicts who have completed the program.

Lassiter said the Industrial Council of Managers are “actually helping to drive that train” because the EDP is “communicating with the council all of the time, such as resource fairs we’ll be having at the public library,” as well as a recently launched resource directory online, which he said Shepherd’s House is listed in.

“If you have someone who is not gainfully employed, suffering from substance abuse or who has been incarcerated, you can access that to find a resource,” Lassiter said.

Nelson said he and Kathy Miles, organizer of the local Agency for Substance Abuse Policy, have discussed the “need to connect social services and economic development agendas more intentionally,” and that “agencies have to work with us to make that happen.”

As far as housing, Lassiter said there will be “more to report on this later; it’s an early stage, but I think we’re already in a position to be able to create a transitional housing opportunity that directly interfaces with job training and knowing that local employers can depend upon the quality of employees coming into their workforce.” He said they’ve been working with managers in order to get them to understand, “Hey, we need your grace to work with potential employees that have had a rough row to hoe and (are) making a turn for the right. We need for you to work with employees … This is an early-stage thing, there’s an opportunity to make that happen.”

Nelson said discussions about this have also taken place with ASAP, but in order for it to proceed, “we will need the community’s help … A controversy that no one wants those houses near them, but we need to support these people as they try to transition effectively back into society.”

After the meeting, Lassiter was asked more about the proposed transitional home. “I’m not able to speak further about it until the project has been more fully defined and due diligence conducted. If it proceeds, we will definitely say more later,” he said.

Scott said in the EDP’s budget proposal, it’s the first time it’s asking “for the governments to provide greater than 50 percent of the total budget. I think that’s a change from prior years?”

Lassiter said the balance in past years came from the aggressiveness of private fundraising, which “ramped up more equity,” which they “continue to want to build, but it’s dependent on staff to be able to go out and do that work.”

“I can give you a little different answer …” Nelson said. “And that is from the last two years, we have come to you all and said it’s not our place to give you an allocation. It is your place to look at what this (strategic) plan will take and we trust you to be good stewards of your taxpayers’ dollars and give us what you pay. You have not been able to fund us at the level we needed to get to the plan … And this year, we’re giving you a number.”

As Nelson prepares to hand off the EDP board chairman role to Turbyfill, Perros said he wanted to publicly thank him for providing “persistence, guidance, therapy … we would not be where we are today without you. I don’t know of a single person who could’ve pulled off what you have done.”

“You all can do me a favor,” Nelson responded. “We’ve gotten in the boat together, but we’re still not rowing as best we can.”

He added the EDP has “really come a long way,” and pointed to the fact that Scott, Perros and City Commissioner Denise Terry are all on the board now. “We’ve done away with this ‘you’re not at the table’ — you’re at the table. What do we need to be doing? I’m going to look at you and go, ‘Let’s do the plan.’”

22 years ago, the City of Danville seemed to be desperately searching for the perfect site to build a new... read more