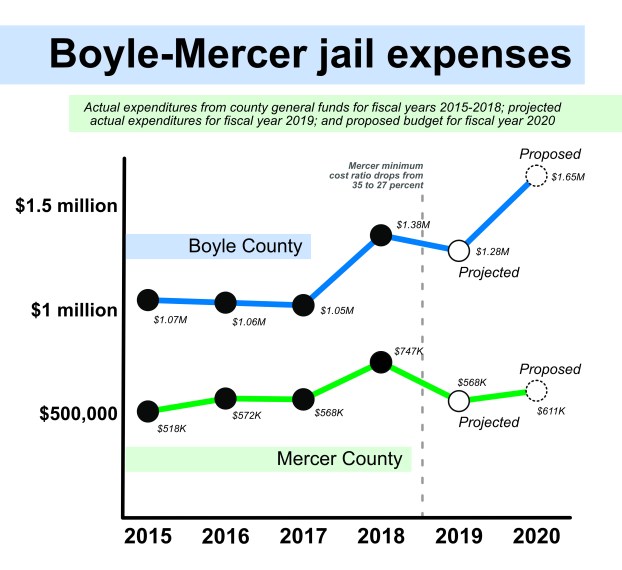 Graphic by Ben Kleppinger/Source: Boyle County Treasurer Mary Conley While the total Boyle-Mercer jail budget is more than $4.6 million, only about $2.26 million of those funds come from the general funds of Boyle and Mercer fiscal courts. The rest of the funding comes largely from payments for housing state inmates and payments from inmates for goods and services in the jail canteen.

A $4.62 million proposed jail budget has been advanced by the Boyle-Mercer Joint Jail Committee for possible approval by the Boyle and Mercer fiscal courts.

The budget expects Boyle County to contribute $1.65 million from its general fund and Mercer County to contribute about $611,000 from its general fund, for a total cost to the counties’ taxpayers of about $2.26 million. The rest of the funding comes largely from payments to house state inmates and payments made by inmates to purchase goods and services.

The Joint Jail Committee approved the proposed budget with only one significant change — a pair of line items anticipating as much as $350,000 in debt service for a new or renovated jail were removed. But while the committee voted unanimously to forward the budget to the fiscal courts, Mercer officials on the committee questioned Jailer Brian Wofford on planned staffing and salary increases, and whether the addition of a case worker position was appropriate.

The budget plans for a reduced cost for the main inmate medical contract, thanks to a significant and sustained reduction in the jail’s inmate population. But it also plans to add two part-time contract positions — a mental health professional and a caseworker — for an estimated cost of around $56,000.

Mercer County Attorney Ted Dean said he has a good understanding of why the jail needs a mental health professional, who would provide health care services to the 10-11 percent of inmates suffering from mental health problems. But he said there may be “a philosophical difference” on the idea of hiring a case worker, who would help inmates as they are released, by making sure they find housing and continue to receive medical care on the outside.

“If we do all this on the inside with the qualified mental health professional, and then when somebody walks out the door, there is no follow-up, we’ve wasted our money and our time that we’ve put in,” Wofford said in defense of the case worker position. “… If there’s not somebody there working with them, they’re going to drop through the cracks. … That is to keep them from coming back.”

Wofford maintained that the case worker position is important in order to solidify gains made in inmate care and reduce recidivism. The Boyle County Detention Center does not currently provide the constitutionally required level of mental health care for its inmates, according to a study completed last year by Brandstetter Carroll, he added.

Dean said he thinks the jail is already “exceeding services provided by comparable jails” and the improvements being made to health care for inmates is already coming at “pretty significant cost.”

“There are almost no facilities who are following the guidelines that Brandstetter Carroll cited. I talked to KACo about that,” Dean said. “Everybody is falling short.”

Wofford said that means the other jails are also liable and vulnerable to lawsuits.

“If another jail is doing something incorrect, and I do something incorrect, I’m just as bad,” he said, noting that courts have not allowed a lack of money to be an excuse for failing to provide care. “… As a constitutional officer, as a jailer, I have a duty to protect. … I don’t think just because other jails aren’t doing it is a responsible answer. I think we need to set the standard by doing things correctly.

“I understand we have to be good stewards of taxpayer money, but by investing this money, it should save us money.”

Wofford said recidivism — people returning to jail on new offenses — is around 75 percent right now. There’s a lot of potential savings for the counties if recidivism is reduced because it means even fewer inmates to pay for, he said.

Dean eventually said he believes the Mercer Fiscal Court will likely not be happy to see costs going up at the jail.

Last year, Boyle and Mercer counties renegotiated their interlocal agreement on the jail, reducing the minimum percentage of costs Mercer must pay from 35 to 27 percent. That new minimum took effect Jan. 1; the proposed budget for 2019-20 will be the first full year with it in place.

Under the current fiscal year budget, Mercer County was planning to contribute $796,589 from its general fund; Boyle County Treasurer Mary Conley has projected it will only actually contribute $568,850. The 2019-20 budget currently anticipates Mercer spending $611,803.44.

Wofford said he estimated the cost for the mental health professional and case worker together at around $56,000 by asking two local companies what they might charge. He doesn’t have a breakdown of how much it costs for each position individually, but he guesstimated the case worker might represent $15,000-$20,000 of that price tag.

Debate on the case worker position continued for a while, but funding for it was not removed. Dean eventually said the bigger issue for the jail is that Kentucky hasn’t increased what it pays counties to house state inmates at all in recent years. Conley said the state’s inmate per diem has gone up once during her 27 years as treasurer.