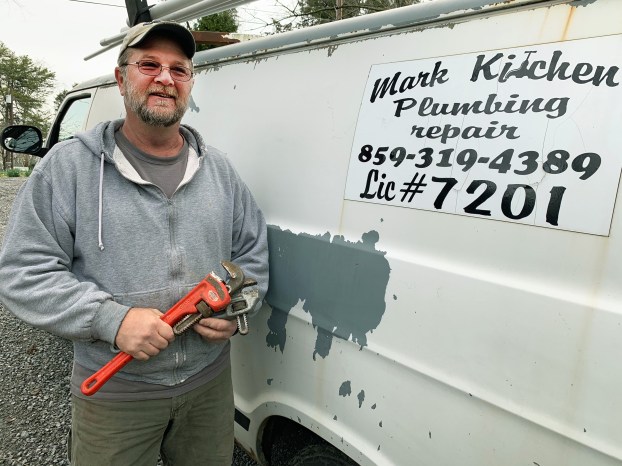 Mark Kitchen says he's enjoyed reworking engines and fixing things since he was young. "I guess plumbing just goes hand-in-hand with that," he says. Photo by Bobbie Curd.

Mark Kitchen never meets a stranger. He says that’s likely how he gets most of his jobs, but a long-time customer says it has something to do with trust, too.

You will see him roving around town in his white van, with “Mark Kitchen Plumbing and Repair” in big red letters on the side. It’s his mobile office, he says while fetching a tool needed to work on David Hester’s lakehouse. 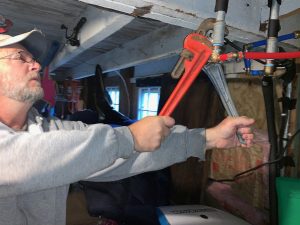 Mark Kitchen works on a long-time customer’s lakehouse to get some busted pipes repaired. Photo by Bobbie Curd.

The Hesters’ pipes froze up and busted somewhere, and it’s raining in one of the bedrooms, he says. As we walk around the house overlooking Herrington Lake, I’m curious if Kitchen could ever work an “office job.”

“Nooooo,” he says. With plumbing, it’s something different every day.

Searching for the caps, Kitchen is sidetracked by an old brass sink fixture stored away; he takes it out, shining it up a bit. It’s just one of the many items customers have given him from old homes over the years, things he considers collectibles. As a Civil War and history buff, Kitchen has been known to barter his plumbing services for a bayonet or a Spanish-American War print.

As far as plumbing, no — he didn’t play with pipes as a kid. “But I was always mechanically inclined. I like to fix things; I guess it goes hand-in-hand,” he says. The last thing he wants to do is work on plumbing during his time off; he rebuilds old vehicles or metal-detects when he’s not working on the old home he bought and remodeled in Perryville.

Kitchen finds the magic spot in the bathroom ceiling causing the leak, after several trial runs turning the water off and on from the basement and crossing fingers.

“Sweet!” Hester says, more than happy they didn’t have to take the wall apart to get to more pipe. In this specific scenario, Kitchen says, where all of the pipes are covered within the walls, “all you can do is fix what you find, turn the water back on and see if there’s another one, then follow the trail …” 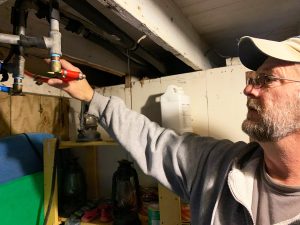 “Oh, I’ve been with him since he was new at plumbing,” Hester says. The guys who work on their own are all pretty well connected to each other.

“If he’s going on vacation, he’ll tell us who to call. Or if it’s something they don’t want to mess with, then we have to call the big guys and pay through the nose,” Hester says.

Finding a plumber you trust is like finding a doctor, Hester says. “You find one you like, know and trust — you stick with them. He’s been good.”

Kitchen did work with a larger outfit, at first, out of Lexington. Back in those days, he says it wasn’t uncommon to do nine or more jobs in one day — “That’s a lot,” he says. Now, he probably does three to four a day on average. And he can pick and choose what he wants to do.

The dirtiest job he ever had was in a Danville neighborhood — a septic tank backed up and a pump had to be used. But then, the pump had to be retrieved, and due to the way the tank was installed, “I had to climb down inside of the tank to get it. Yeah,” Kitchen says, and laughs. “I don’t fool with sewers any longer.”

He went on one call because someone’s cleaning person stole jewelry from them and was caught. “She ran into the bathroom and locked the door, and they heard her flushing the toilet. She was trying to get rid of the jewelry,” so he had to go into the sewer line to try and find it.

“I’ve had to go take sink drains apart to get teeth fillings, jewelry — I was called to go down into a drain and find a contact,” he says.

Before he was a plumber, Kitchen worked for a liquor distributor. “Then I started looking at the guys who’d been there for 20-plus years. You can only do so much — I didn’t want to do the same thing over and over every day.” So, he took a lower-paying job as a plumber’s helper, to start, before becoming a master plumber. “I guess I sort of fell into it, and decided I like it.” 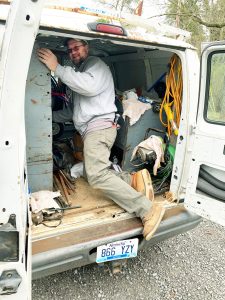 Master plumber Mark Kitchen works out of his “mobile office,” which is his Mark Kitchen Plumbing and Repair van. Photo by Bobbie Curd.

Kitchen advertised once, when he first started, then never had to again. He’s developed relationships with his customers, even taking time out to stop in to see the elderly ones just to check on them now and then.

A lot of times when he gets new calls, it’s a widow who says “my husband always took care of that,” and they’re in search of someone they can trust. They get his name from other women at church or card clubs.

“I don’t rake them over the coals or try to take advantage of them because they don’t know this sort of work,” Kitchen says. Sometimes they even ask if they can watch or try to learn. “I’m fine with that, I show them what I’m doing.”

He says a lot of people think everything in plumbing is expensive. “Not what I do. It’s not expensive, but it’s a necessity — people gotta have their toilets, their hot water and need their sinks to drain,” Kitchen says. And he’s happy keeping his business on a small scale.

“I’m comfortable where I’m at, to be honest. Not trying to be wealthy, and I like what I do,” he says. “It supports me and my lifestyle, and I’m happy.”

Youth coalition for high school students is being formed

A faith-based, non-denominational youth coalition for high school students is being formed in partnership with the Agency for Substance Abuse... read more