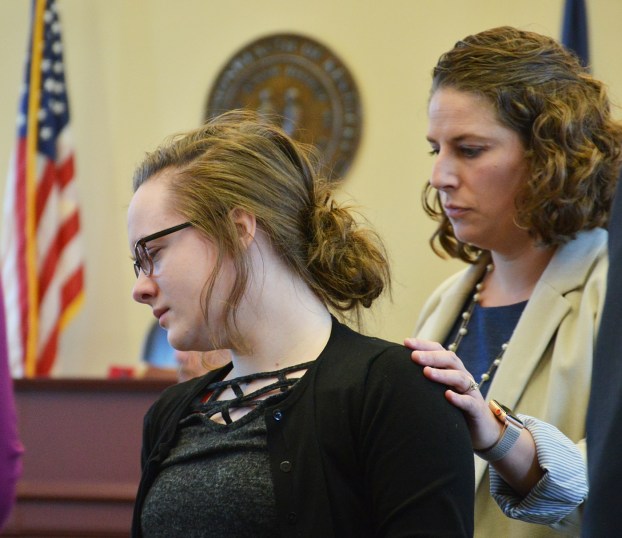 Jenna Oakley is lead back into the courtroom after a short recess to compose herself after her father, Phillip Oakley’s victim impact statement. Photo by Robin Hart.

What could have led a 15-year-old girl to participate in causing her step-mother’s death, run off with a young man and ultimately be tried as an adult and plead guilty to manslaughter and theft?

“This didn’t happen in a vacuum. These things never do. There’s a big story here for why we’re in this room today,” said Suzanne Hooper, mitigation specialist for Jenna Oakley’s defense during her final sentencing hearing Wednesday. 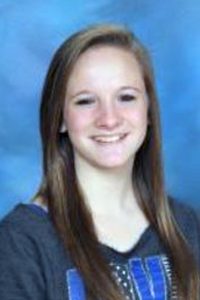 A photo of 15-year-old Jenna Oakley, left, was released to the public in 2016, after she went missing following the death of her step-mother, Rhonda Oakley. File photo

On Sept. 1, 2016, Oakley’s 52-year-old stepmother was found dead in the basement of her home on the edge of Junction City. Authorities launched a nationwide search for Oakley, who did not return to her home the night of the death.

Oakley and Kenneth Nigh, her 20-year-old boyfriend, took Rhonda Oakley’s car and left the state; they were found in New Mexico three days later. Nigh later died in a hospital from self-inflicted injuries.

In the first public glimpse of Oakley’s background leading up to the day Rhonda Oakley was killed, Hooper told the court she found two things unique about Oakley’s case.

“One is that there is zero criminal history. Her teachers loved her. There were never any infractions in school,” Hooper said. “So even being involved in the system is an utter anomaly.”

Hooper said the second unusual aspect of Oakley’s situation was the lack of her family’s involvement.

“I’ve worked on cases where there are grown men who are accused of some pretty gruesome crimes, yet their mothers are always calling me, or texting me, trying to reach me to see how the client is doing or how the case is going,” she said. “But never once have I had an inquiry from Jenna’s mother or her father. It’s just really astonishing.”

Hooper said she thinks Oakley was “thrown away repeatedly by her parents,” based on interviews she conducted and based on records. “The interviews I’ve done over the past two years — it appears that Jenna was just thrown back and forth between one parent and the other, when things got difficult or there was … abuse in the home.”

“She never even finished a school year in any one school district,” Hooper said. 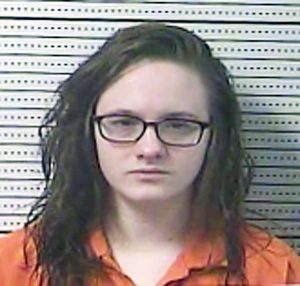 Oakley, now 18, was booked into the Boyle County Detention Center Wednesday after being sentenced to 15 years for mansaluaghter and theft.

Over the course of the past two years, Hooper said she talked with Oakley for about 200 hours, face-to-face and via phone. She also researched Oakley’s early life by going over her education and medical records, as well as documents from child protective services involving Oakley in Indiana and Kentucky. Hooper said she interviewed Oakley’s friends, parents of friends, former neighbors, a former landlord/babysitter, former pastors, teachers, therapists, school counselors a step-sister and a half-sister, making her qualified to speak about Oakley’s upbringing, she testified.

When asked about Oakley’s early life with her mother, Christy Wood Poe, in Indiana, Hooper said, “It wasn’t a safe home.”

She said after Oakley’s parents separated, her mom worked at the local jail, formed a romantic relationship with an inmate, bonded him out “and brought him home to live with the children.”

“It was incredibly unsafe,” Hooper said. “He ended up stealing from them and he brought women into the home that the children saw.”

Hooper said child protective services was called a couple of times when Oakley was about 3 years old, when a neighbor saw rats around the home and was concerned that the children were being left alone for long periods of time.

“When she finally did get in, she said in her notes there was garbage scattered everywhere around the house,” Hooper said. “There was vomit. There were feces and urine, human and animal, throughout the house.” 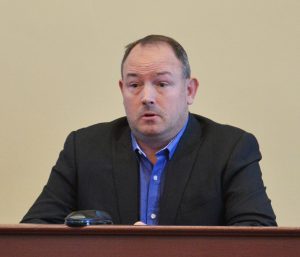 Phillip Oakley gives his victim impact statement. He asked his daughter, “I want to know why you did what you did.” Photo by Robin Hart.

The records noted that roaches were under the stove; dirty, moldy dishes were piled in the sink; and medicines were within the children’s reach, Hooper said.

The landlord was also Oakley’s babysitter, Hooper said. “She spent a great deal of time with Jenna as a child and she said Jenna was constantly covered in flea bites,” and her constant scratching caused them to bleed.

When the family moved out of the house, the landlord said she saw the same filth that the social worker had reported, Hooper said.

Hooper said she spent three days in Arlington, Indiana, and saw the house where Oakley had most recently been living with her mother. “It was sort of ramshackle and very run down. Broken windows and things like that,” Hooper said.

“Inside the home … what the records indicated — it was terrifying. It was chaotic and it was unpredictable.”

Hooper told the court that Oakley’s mother wouldn’t speak to her, but her older half-sister said the abuse was “terrible;” she left when Oakley was in middle school.

“She’s been estranged from Christy ever since. It’s been difficult for Jenna because this older half-sister was really her protector. It got really bad after she left.”

Hooper said in Phillip Oakley’s house, “It appears there was a lot of emotional neglect. Jenna was in an unfinished basement, by herself. It was moldy and she was often sick because of it.” There were also no pictures of Oakley inside the house, Hooper added.

Commonwealth’s Attorney Richie Bottoms pointed out that Hooper had never actually been inside Phillip Oakley’s house and had based her opinion only on crime scene photos and what his daughter had told her.

“That is correct,” Hooper said.

Bottoms said that in Hooper’s earlier testimony, she stated Oakley was doing well in the Boyle County school system while living with her father and step-mother. And she didn’t have behavior or dependance issues, to which Hooper agreed.

Bottoms asked Hooper if she “was aware that (Phillip Oakley) was trying to block her pursuit of any relationship with Kenneth Nigh. He did not approve of the relationship.” Hooper said she did know that.

Hooper told Bottoms she did not find any records where family services had been called to “Mr. Oakley’s home, as far as it relates to living conditions of the home.”

“So he was doing the things, at least appropriate along those lines, by making sure she was in school and doing what she was supposed to be doing,” Bottoms said.

Hooper said her opinion as to why Oakley was susceptible to being in a relationship with an older man: “I think that a little girl who was deprived of so much love and care … she’s starving for it. … It’s like air. She needs it like air to breathe. She needs love and air to breathe. So when somebody comes along like that, it’s a knight in shining armor. It’s everything. Somebody loves her for once. It’s all she’s ever wanted.”

Hooper said the first thing Oakley told her when they met was, “’All I ever wanted was a family.”

Hooper said she believed Oakley “revered” Nigh. “He was giving her everything she ever wanted. … She just looked up to him for everything. … The worst thing that could have happened was to lose that love.”

Anthony Lee Tanner, another mitigation specialist for the defense, provided the court with a thick stack of papers explaining the scientific aspects of brain maturation and adolescence. It also contained several articles about how adverse childhood experiences (ACEs), abuse and violence can affect the brain.

According to Tanner, “ACEs are stressful or traumatic events, including abuse and neglect, household dysfunction and traumas.”

During an interview, Tanner asked Oakley two-part questions she answered:

• Did a parent or other aduilt in the household often: swear at you, insult you, put you down, or humiliate you? “Yes.” Act in a way that made you afraid that you might be physically hurt? “Yes.”

• Did a parent or other adult in the household often: push, grab, slap or throw something at you? “Yes.” Ever hit you so hard that you had marks or were injured? “Yes.”

• Did you often feel that: no one in your family loved you or thought you were important or special? “Yes.” Your family didn’t look out for one another, feel close or support each other? “Yes.”

• Were your parents separated or divorced? “Yes.”

• Was your mother or stepmother: often pushed, grabbed, slapped or had something thrown at her? “No.” Sometimes/ often kicked, bitten, hit with fist or hit with something hard? “No.” Ever repeatedly hit over at least a few minutes or threatened with a gun or knife? “No.”

• Did you live with anyone who was a problem drinker or alcoholic or who used drugs? “Yes.”

• Did a household member go to prison? “No.”

Tanner testified that Oakley had the mental faculties of someone younger than 15 when the manslaughter occurred.

He also noted that Oakley lived in an abusive home environment and her mother encouraged the inappropriate relationship with Nigh.

In conclusion, Tanner wrote that there was an overall lack of family love, nurturing and understanding in Oakley’s life.

He also spoke with Nigh on the phone.

“And you told him to stay away or there’d be consequences?” Bottoms asked Phillip Oakley. “He knew if he came to your house and he was caught there, he would go to prison or you would do everything you could to make sure he’d go to prison?”

“I want to know why you did what you did,” Phillip Oakley asked his daughter in court. “Because myself or Rhonda never abused you.”

“When Jenna came to live with myself and Rhonda, it was to give her a better life,” he said.

Bottoms asked him, “On the day that you got the call that Christy (his ex-wife) and Jenna had had a bigger issue and that Jenna needed to leave, how did Rhonda feel?”

“She’s my daughter,” Phillip Oakley answered. “I was going to do whatever I needed to do to protect her.” He said Rhonda Oakley encouraged him to take his daughter in.

“She loved Jenna. She did everything in her power to care for Jenna. She provided for Jenna,” he said.

“There was no better person on the face of this earth than Rhonda. You didn’t have a right to do what you did.”

He said Oakley was defiant and wasn’t following their rules at home, so he and Rhonda talked about sending her to Charter Ridge or some type of reform school — “something just to get her on track.”

But Rhonda Oakley wanted to continue trying to help her step-daughter at home.

“You didn’t have the right to do what you did,” Phillip Oakley said. “You agreed to a 10-year sentence for taking her life and five years for stealing her car. Myself, your brother, Rhonda’s children, Rhonda’s friends … we got a life sentence.”

“You took a life, and so yes, I’m angry because you destroyed so many people’s lives,” Phillip Oakley said. “Jenna, you wrote in a journal that you were going to do that. Kenny didn’t know our address — so you had to tell him. You had to let him in the house.

“You’re saying you wish you could have stopped it? Jenna, you’re not a victim. You’re a victimizer.”

Editor’s note: This is the sixth story in a series focused on agency funding requests made to the City of... read more