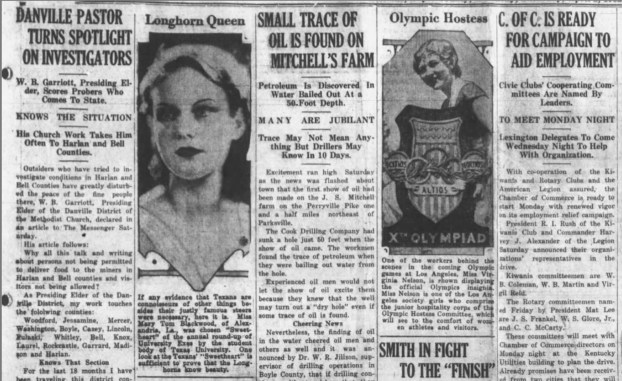 Advocate-Messenger Archives The front page of the Danville Daily Messenger on April 2, 1932, featured a story headlined, "Danville pastor turns spotlight on investigators," about a group of people from the eastern U.S. sent to allegedly investigate impoverished conditions in Kentucky's coal fields.

Kentuckians are all too familiar with the negative stereotypes about our culture and our education that persist in the minds of many who don’t know what they’re talking about.

It’s a problem that has persisted for longer than you might expect: A lifetime ago, on this day’s front page in 1932, a Danville pastor was coming to the defense of eastern Kentuckians against “outsiders” sent to “investigate” how people live in Harlan and Bell counties during the Great Depression.

The allegedly well-intentioned investigators “have greatly disturbed the peace of the fine people there,” W.B. Garriott, presiding elder of the Danville District of the Methodist Church, told the paper, which at that time was named the Danville Daily Messenger.

Garriott attacked apocryphal tales apparently spread by those living outside the Bluegrass State, that coal miners were supposedly being kept sequestered from civilization and good Samaritans trying to bring them food were being turned away.

“For the last 18 months, I have been traveling this district constantly and there has never been a time that I know of when my presence has been questioned by any coal operator or by a representative of the law in any of these counties,” Garriott wrote in a letter to the paper. “I have visited a number of their mines, preached to these people and spoken to them on different occasions where I have been invited to do so and they have always been kind and courteous to me and asked that I come back as often as possible and speak to them again.

“The only time I have ever been questioned was by a Communist sympathizer who held his paper with him and told me I might read it there, but if I were to go a little farther up the road and read it, I would be sent to jail.

“I personally know that a number of the counties in this state have contributed food and supplies to the Red Cross to be sent in to the coal fields and I have never heard a protest of any kind or even an intimation that this kind of work was not welcomed. Still there is a big write-up that people from the east are not permitted to feed these poor starving miners. Then comes the story that students from different colleges and universities are not permitted to come and bring food and make an investigation of conditions here.”

Garriott explains that Kentucky graduates from “leading American colleges” had planned to meet with whoever was in this group of students sent to investigate, but then they found out “these so-called students did not have any official connections or even the approval of these different institutions to make such a trip.”

After defending the decision to cancel a welcome party for the group, Garriott notes that “I have just spent a week in Pineville and I find there as fine a type of citizenship as you will find anywhere, and in proportion to their population you will find as many college and university graduates there as in most any city of its size and the same will apply to Middlesboro and Harlan.”

“The unemployment situation in the coal fields has been bad we are willing to admit,” Garriott writes. “I am sure from reports that some of these Easterners could find some bad conditions in New York or Chicago or some of the other large cities where it would be closer home and I have no doubt but that they could find conditions as bad or worse than they can find in Kentucky and when it comes to gun thugs, Kentucky is tame by the side of some of their gangsters and racketeers.

“The miner has been hard hit and so has the tenant of the farming section and in fact everybody has been touched by the present conditions but why single out just a small portion of country and try to magnify conditions there(?)

“No, the trouble is not that the people do not want the miners to be fed or that they object to a fair investigation of conditions. The trouble lies with the people who want to make the investigation and what they represent, for it has been their communism which has caused the trouble in this section and it has greatly disturbed the peace of the people.”