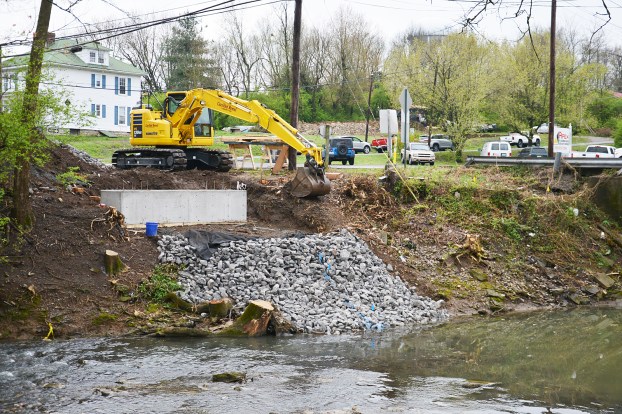 A new vehicle bridge and a second pedestrial bridge over Clarks Run on S. Second Street will cause the street to be closed for about two months, beginning on April 15. The pedestrian bridge's end bents are already in place and will be where two sections of decking and a railing will be added. Photo by Robin Hart.

Regular travelers on Second Street need to plan alternate routes because the road will be closed for two months between Randolph Hill and J.E. Woods Drive as a new vehicle and a second pedestrian bridge are constructed over Clarks Run.

Beginning Monday, April 15, the north and south approaches to the bridge near the entrance of Michael M. Smith Memorial Park will be closed as the old bridge is demolished and a new concrete bridge is constructed, according to Danville City Engineer John Cassel.

However, the existing pedestrian bridge will remain open, he said.

All of the side roads off of Second Street will be accessible. “You just can’t go across the creek,” Cassel said.

Cassel’s office will soon be alerting city and county governments, first responders, utility companies, local boards of education, Kentucky School for the Deaf and funeral homes of the closure so they can have alternate routes in place before construction begins. With proper planning, there should be little, if any, loss of time responding to emergencies, Cassel said.

Message boards will be set up on both ends of Second Street warning drivers of the upcoming closure, Cassel said. They will also show a countdown of days before the bridge closes.

“We want to give a heads up to drivers going both ways,” Cassel said.

Drivers heading north on Fourth Street should avoid turning onto Second Street at the traffic light, and continue to Third Street, Cassel suggested.

Drivers heading south should get onto Fourth Street as soon as possible, he added.

Cassel said the new pedestrian bridge won’t match the existing wooden arched bridge. It will be concrete and appear to be flatter. It will be nearly seven feet wide and about 80 feet long, Cassel said.

“They are really excited,” he said.

Brandon Falin, foreman for Jave Construction LLC that has designed and is building the bridge project said they have already placed two end bents for the pedestrian bridge. He’s talked to several people who have walked by and been curious about the project.

“They seem really nice,” Falin said. “They’re really excited not to have to cross the street to get over the creek.”

This is the third project Falin has worked on in Danville, he said. The first two being an airplane hanger at Stuart Powell Field and the wooden bridge at the park at the water treatment plant on Lexington Road.

“Danville is a nice little place,” Falin said. He appreciates all of the support from the people walking by and the cooperation from Cassel, he said.

When finished the vehicular bridge will “meet the state standards for the type of traffic and volume for that road,” Cassel said.

It will have two standard 12-foot lanes and be about 30 feet long.

Having the road closed to through traffic for two months, “It’s going to be like ripping off a Band-aid. It’s going to hurt like heck when you first do it. But it will feel better later, once it’s over,” Cassel said.

“It will be a lot safer for everyone.”

CDB — it’s not pot, it’s legal and it won’t get you high. And many are swearing by it as... read more