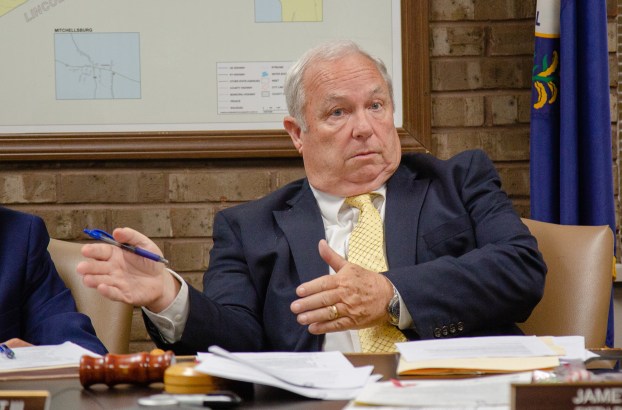 Boyle County magistrates got an earful from a local businesswoman Tuesday when they complained about a bill to care for flowers at Constitution Square Park.

“All of this, this year is done as a favor to you, for this price — which is a favor to you,” said Janet Hamner, who was asked by County Engineer Duane Campbell to help plant flowers in the Governor’s Circle at the park that would coordinate nicely with other flowers planted around downtown by Danville. “If you don’t want it, just say it now. You’re gonna have to pay for these flowers though, because I’ve got my name on them. They had to be ordered.”

The fiscal court had just approved paying Hamner’s Danville business, Cottage Interiors Inc., $2,200 for flowers and another $550 for maintenance and watering of the flowers during the month of June.

The $2,200 charge was already budgeted, but Treasurer Mary Conley said the $550 was not in the budget and would have to come out of the Constitution Square contingency fund. 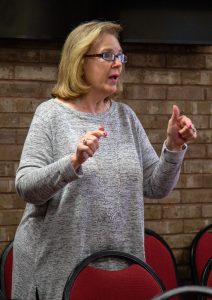 The court just barely approved the expense — magistrates split 3-3 and Judge-Executive Howard Hunt had to break the tie with a “yes” vote.

Magistrate Phil Sammons said he was opposed because the flowers were coming from a Lexington grower, when there are groups in Boyle County that might be able to provide the flowers instead. “I don’t like that at all,” he said, suggesting that local FFA or Kentucky School for the Deaf students could be used instead. “… We need to buy anything we can local.”

Magistrate Tom Ellis said he shared Sammons concerns. “I would like to mark the calendar next year early enough so they could have an opportunity to keep those dollars in this community and make it a local contract if they win the bid.”

Cullen was apparently referencing a compromise made earlier this year to give staff at the Boyle County Detention Center an across-the-board raise of 50 cents an hour, instead of the $1 an hour initially requested by former Jailer Barry Harmon and current Jailer Brian Wofford. The raises are expected to cost $30,000 this fiscal year; the other half of the $1 raise is included in the jail’s preliminary budget for 2019-20.

Wofford was in attendance at the meeting and didn’t seem to have a problem with the flowers, but he did propose a way to save money next year: “I think once we get our jail crew up and working next year, why don’t we see if our folks can do that and save the county the money? We’ll use our inmates … so we can offset some of that cost for the county.”

“I can think of a better idea than that, Brian,” Sammons said. “… We’ve got two magistrates that have businesses downtown, they should be responsible for watering.”

Magistrates Cullen and John Caywood both own businesses in the downtown historic district, where Constitution Square Park is located.

On Friday, “Constitution (Square) is having a cleanup and I’ll expect you there to help clean up,” Caywood told Sammons.

“I have a bad back and can’t bend over,” Sammons responded.

“… You haven’t been there in years,” Caywood continued.

“As much coffee as you drink, you shouldn’t have any problem watering them flowers,” Cullen said to Sammons.

“Does anybody need to be reminded of the motion you’re voting on?” Judge-Executive Hunt asked, trying to corral the herd.

“Three-three. It comes down to the judge,” Hunt said, taking a long pause before deciding, “I’m going to vote for.”

“… Next year, we will be looking local,” Cullen said, just before Hamner decided to address the court.

Hamner, who later noted she is a local business, said she has taken care of ordering and planting flowers for the City of Danville for years.

“We place our orders in November so the flowers are planted in January by seed and grown from seed to a certain size,” she said. “(County Engineer) Duane (Campbell) did not ask and you didn’t approve him doing that soon enough for us to be in with the grower in the initial phase.

“On your behalf, I went to that grower and begged that he put together some-thousand-square-feet of flowers that would coordinate in color with what the city planned so we’d all kind of be coordinated. And because I have a 20-year relationship with him, he agreed to do that.

“That was in March. We were way behind the eight-ball getting flowers then and couldn’t have gotten them from anybody else in the quantity we needed.”

Hamner said she also looked into various maintenance options and costs for the court at Campbell’s request. “I gave you a long list of things that we would do this year and some we would do next year, because I thought I was helping you and helping Duane.”

Hamner said getting plants from a local source is not as easy as magistrates suggest.

“We have tried in other years — the city has — to buy flowers locally, and we fail miserably in that effort,” she said. “… Every now and then we veer off and buy from somebody else; we always go back to this guy.”

Hamner said she went through similar contortions to get a contractor to agree to do maintenance for the flowers.

“The contractor truthfully didn’t want to do it. I begged him to please do it for me, he said. ‘OK.’ I asked him to do it for that number of dollars. He said, ‘No.’ And I said, ‘Please,” and he said, ‘OK,'” she said. “So on your behalf, I have done everything I could do. I didn’t come looking for this job; I did it because I was asked to. And truthfully, I have been asked to by almost every magistrate that’s ever sat in your seat since you took over the park up there … and every year, I said, ‘No,’ and ‘No,’ and ‘No,’ and ‘Hell no.’ This year, because Duane asked, I said, ‘OK, I will.'”

Hamner said if magistrates think they can maintain the flowers themselves, they should give it a try.

“Well, you’re not going to get that,” Hamner said. “… When it comes to next year, I will be so happy to give this job up, I promise.”

“Understand, my objection to this is because we’re out of the budget cycle,” Cullen said after Hamner’s scolding. “That’s the biggest thing — we set a precedent that if we’re going to spend money, it’s money that’s allocated.”

Cullen added, “We appreciate the local business and supporting a local business … Belts are getting tight, so next year, we’ll have some ideas, too.”

Codes director wears many hats as she works for her ‘16,000 bosses’

Lester pauses to take a look at the many ordinance and legal books she uses often as director of codes... read more