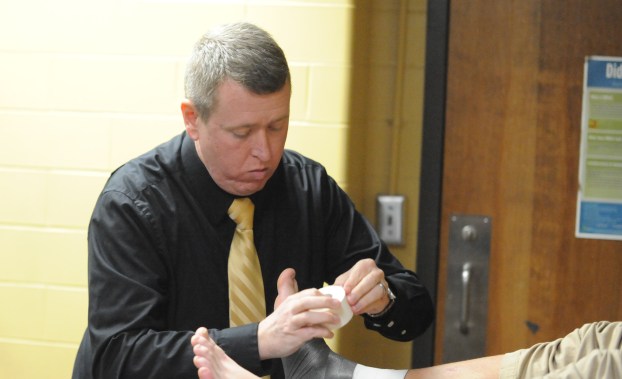 Boyle County’s Jeremy Johnson has 749 student-athletes under his care.

His love for the profession started in high school. As a freshman at Boyle County, he tried out for the basketball team and didn’t make it. But head coach Mike Pittman saw his love for sports and had him stick around.

“That was the best thing that ever happened to me, really,” Johnson said. “Coach Mike Pittman really kind of put me on the path. He knew I really enjoyed athletics, wanted to help people and be around it. He let me be a manager, I got to know Joan Mann that way and it just led into being the athletic training student aide for her. By the time I was a sophomore/junior, I knew I wanted to do this.”

Johnson earned his undergraduate degree at Eastern Kentucky and worked with EKU football and also worked with spring sports at Lexington Catholic.

Coming out of EKU, he knew he wanted to work in collegiate athletics. 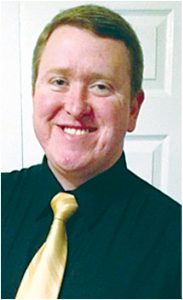 That changed when he went to grad school at South Carolina, where he worked a year with tennis, golf, volleyball and basketball in the SEC.

“I liked that, but I could just see that it was different and more of a business than high school athletics,” Johnson said. “After that first year, I got assigned to a high school just outside of Newberry, South Carolina and worked a year as their athletic trainer. Really, probably experience-wise, I learned more in that one year than I have my entire career. You get thrown into it, you’re the only one and you just have to figure it out. I developed a passion for secondary school athletics that way.”

After he graduated from EKU, Mann retired as the athletic trainer at Boyle County, but the timing wasn’t right for Johnson’s return to Boyle — and he didn’t want to.

But Johnson’s time in South Carolina showed him the value of being an athletic trainer at the high school level, and when Mann called him while he was working in Newberry, he decided to come back home.

“I think it was meant to be, my wife got hired about that time here, we didn’t know each other and then met through coaches,” Johnson said. “I think God has a hand in all that stuff, I just think that this is where I’m supposed to be.”

And these nine years at Boyle, Johnson has loved every minute of it. He and his wife Claire celebrated the birth of their second child last month, and to him that’s what his job is about: Building relationships with families in Boyle County.

“High school you get kids who move, do different things,” he said. “But I’ll give you an example, Emmie Harris. She started playing high school basketball when she was in sixth grade. I got to know her over seven years. It’s not just that student-athlete, it’s her sister. You end up treating these patients that you might have went to school with their dad, their brother, sister, cousin. It’s a really neat way of developing relationships, I think that’s what it’s all about, the relationships that you build.”

Johnson said that the work/personal life balance of being an athletic trainer isn’t easy — he said he’d work about 260 days a year when he first got the job.

Now with a family of his own, he’s working harder to find that perfect balance.

“In health care, it’s higher than some professions,” he said. “You have to have a good balance and I try to do that; I think I struggle with that sometimes. It’s tough because if I take off, I don’t have anyone to cover. It would be great to have an assistant, where if I was sick, I wouldn’t need to be worried about my student athletes not having somebody here to treat their injuries.

“You have to have the right type of spouse, my wife is great at balancing all that. She definitely does more than me on that front. I feel guilty about that sometimes, to be honest. But I’ve toned back some, I’ve learned to say no sometimes — that’s important because I can’t work everything. When I first started, I probably worked 260 days a year, and that’s not my contract. I work and fulfill my job to the best of my ability, but family is important.”

For coaches at Boyle County, there’s no question that Johnson is a vital cog in the success for all athletics in the school system.

“Jeremy has been a game changer for us,” Coach Brian Deem said. “His ability to treat our athletes at such a high level allows for all of our kids to get healthy and back in game shape at a much faster rate.”

Deem’s a unique coach because he deals with Johnson pretty much throughout the year: Deem coaches girls soccer and softball.

“His commitment to Boyle County student-athletes is just another piece of the puzzle that allows Boyle County to succeed at such a high level in all athletic areas,” Deem said.

Athletic director Kyle Wynn also sees how much time Johnson puts in — Wynn is there as an administrator but also as the head baseball coach.

“Work ethic no question defines Double J,” Wynn said. “He’s at everything he can be no matter the sport or the time/day of the week. He’s devoted to the kids is why he does it. Personally as baseball coach, I’m thankful to have someone full time with the knowledge he has. It makes my job easier to not have to worry about injury related problems. I can lean on him to take care of that for me.”

Johnson said that he’s got the support of his coaches to make decisions on when to hold an athlete out with an injury.

“I have good support and I have the autonomy to say, ‘no, we’re going to rest you and get you better before you return to play on this,’” he said. “I think that’s what is really important, coaches have experience in coaching. They may know about an injury because they experienced it, but they don’t have the education and training to recognize those types of injuries and be trained in rehabilitation and acute care.”

And, for Johnson, the “easier” injuries might be the more painful ones to watch: It’s the strains and sprains that make Johnson’s expertise a necessity.

“Fractures and different things are easier from a clinical standpoint because I can look at a patient and say ‘OK, this type of bone takes six to eight weeks to heal,’ that time frame is known,” Johnson said. “Sprains and strains, each one is different. You can’t feel what the patient feels, you kind of have to take that slow, test them functionally to see if they’re ready to play. Those gray type of injuries are really tough to deal with.”

Of course, the end goal in athletics is to win, but for Johnson, the job has always been about more than just getting athletes back on the field.

“Winning is great, we all love to win. But I don’t think that’s what I’m going to remember the most,” he said. “I think the relationships is the biggest thing, you get to know your patients and student-athletes and you coaches. That’s what this is about, that’s what I’m going to remember and I hope that they remember that I took good care of them and did the best that I could, help them through what could be a difficult situation.”