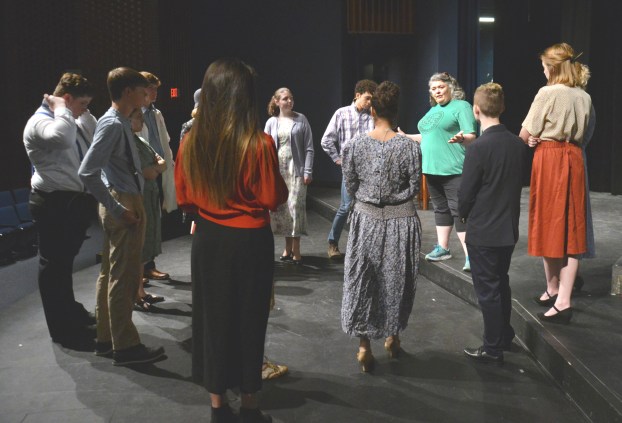 Beth Marlowe gives last minute instructions to the cast of "These Shining Lives" before a dress rehearsal Monday afternoon. Photo by Robin Hart.

She works at the market Tuesday through Saturday, cleaning donated items to sell, setting up display areas, posting available merchandise on social media and helping shoppers load up their purchases. And even though she’s supposed to be off the clock, most Mondays she still schedules pickups for items for the market and takes calls.

Then, she volunteers in a fifth-grade classroom at Toliver Intermediate School, where her daughter, Maggie Jenkins, is the teacher. “I call them my grandclass,” Marlowe said, laughing, because she doesn’t have grandchildren. “I take Maggie lunch and hang out a little bit.” 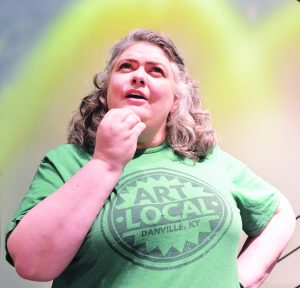 Beth Marlowe ponders a question about the play she’s directing at Danville High School which runs today through Saturday. Photo by Robin Hart.

This past Monday, Marlowe also rushed to the store to buy batteries and bread for props to be used in a play she’s directing.

“Then I came to rehearsal,”

Marlowe is directing the Danville High School play “These Shining Lives,” which opens tomorrow and runs through Saturday.

But this play is different — more intense, Marlowe said.

“I typically keep my cool. … Last year in ‘Little Shop of Horrors’ I didn’t have the same sort of feeling as I do this year.”

“As soon as we had the first read through, I was like, crud. Why was I doing this with children?” Marlowe said.

“This year, this play is so important. It’s so tough” because of the mature subject and the emotions she is coaxing the actors to portray which involve death and suffering.

“They haven’t experienced these things yet,” in their young lives, Marlowe said.

“Every bit of the dialog is important. It’s a little more intense,” than what most of the cast is used to, she said. Many of the young cast members expect to be light-hearted and have fun during rehearsals, Marlowe said. But in “These Shining Lives,” she’s had to steer them to be more focused and serious.

“There are all types of theater,” Marlowe said, and in shows such as this production, “they have messages that are important.”

Marlowe said she and DHS Gravely Hall media/technical coordinator Malcum Spring work well together and have the same philosophy when working with students. 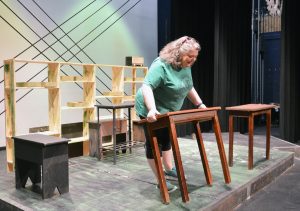 Beth Marlowe sets out desks before one of the final dress rehearsals of “These Shining Lives.” Photo by Robin Hart.

“We’re doing it for the kids. We’re not doing it for some big, huge, grand production. We do it to educate the kids. And even more importantly than educating them in theater, in my opinion, is letting them learn to love it.”

Marlowe said, “So many kids literally don’t have a place, and sometimes this is just a place for them to be and be a part of, and be involved with. I love that aspect (of theater.)”